Renault give the Megane line a facelift prior to Frankfurt debut

Renault is giving its Megane a facelift. This 3rd generation model will make its public appearance at the 2013 Frankfurt Auto Show. It will go on sale in Europe in early 2014.

As Renault gives its models a new design identity, it is now the Megane line's turn to incorporate the brand's latest front-end styling. The 2014 Renault Megane cache has the hatchback, coupe, sport tourer, GT and the range-topping Renault Sport. Common changes are a redesigned front end thanks to a new hood and front bumper and elliptical headlamps with gloss black backgrounds. "The change ensures greater unity between the front ends of Megane Hatchback, Sport Tourer and Coupe which feature the same bumper and bonnet, although each version maintains its own distinctive identity," said a company statement. 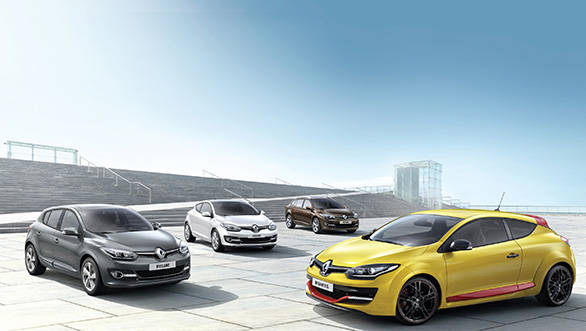 The Renault Megane family will debut at Frankfurt

The front gets a touched up air vent grille and a bigger Renault badge on the bonnet. New daytime running lights extend along the outer sides of the front bumper. The GT and RS models get new badging and fine detailing in red.

The ?Megane line gets numerous top-of-the-line driving aids including Renault's R-Link infotainment system. There is also a multi-directional joystick to navigate through the R-Link interface.

Powertrain options range from a 90PS 1.5-litre dCi turbodiesel to a tweaked rig that dishes out 165PS. The RS gets a 2.0-litre mill that delivers 265PS. A new option of a 131PS 1.2-litre 130 TCe petrol engine will be available with Renault's EDC dual-clutch gearbox.

The current starting price for the Megane range is £16,745, but there has been no word on the pricing of the 2014 models.