The refreshed 2018 Bajaj Pulsar 150 has been seen in spy shots prior to its expected launch at the end of this month. The refreshed bike gets new body graphics and a new split seat. The split grab rail and exhaust muffler from the 180 also make it to the new 150. The exhaust muffler is paired with a new brushed metal heat shield and better-finished foot pegs have also been added. The new 150 is expected to be priced at about Rs. 2000 more than the outgoing model, which is presently priced at Rs 76,723 (ex-showroom, Delhi).The refreshed sports-commuter motorcycle will carry over the same 149cc single-cylinder DTS-i twin spark engine from last year's bike, this can deliver 16PS and 12.5Nm but is expected to have better NVH levels and marginally higher outputs. Other changes noticeable in the spy image are the addition of the fatter 37 mm telescopic front forks from the 180 and the addition of a rear disc brake. ABS will not be available so its fair to say that the bike will launch not later than March 31. 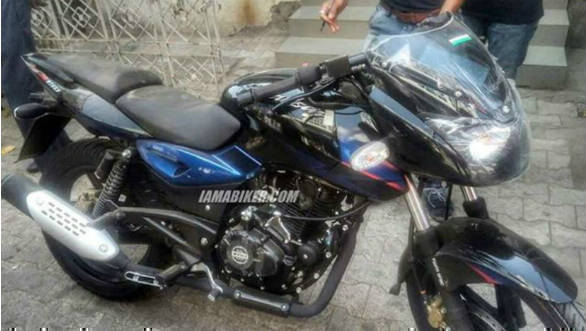 The Pulsar 150 has been on sale since 2001 and is currently in its fourth generation which debuted in 2010. The bike has always been a major seller for Bajaj and with this update, it hopes to remain competitive in the sports commuter segment until the all-new Pulsar 150 is ready. The Pulsar 150 competes with the likes of the Honda CB Unicorn, TVS Apache RTR 160, and the Hero Xtreme Sports.