Royal Enfield has started selling the Thunderbird 350 in Australia as the Rumbler 350. The brand has a strong presence Down Under and this bike joins the Classic, Continental GT and Himalayan in its line up there. The bike is priced at AUD AUD 6,790, (Rs.3.4 lakhs) on road and is LAMS (Learner Approved Motorcycle Scheme) compliant. Royal Enfiled is targeting new learners and buyers looking for a relaxed, affordable cruiser. The bike is imported from India and is identical to the domestic model, the only changes being the Rumbler badges on the side boxes and reflector strips on the front forks. 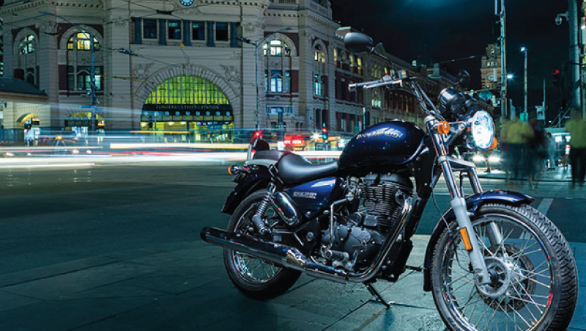 The bike carries over the same 346 cc twin-spark, single-cylinder, air-cooled engine that powers the Thunderbird 350 and other models in RE's stable. This engine produces 19.8PS and 28Nm and is paired with a 5-speed transmission. The fuel tank is of 20 litres capacity and the bike weighs 192kg. All other mechanical components also remain unchanged. The Rumbler 350 is being offered in three colour options - Marine, Stone and Lightning.

In other international markets too, the Thunderbird 350 is sold as the Rumbler 350 and this development is another instance of Royal Enfield's aggressive global expansion strategy. The brand has been quickly growing its product line-up and this comes after the recent launch of the Thunderbird X models in India and the announcement of the upcoming 650 twins.