Someone once said that motorcycles are made of iron, steel, rubber and magic. And while most people would have you believe that there isn't much of the latter involved, the men and women frequenting the Harley Experience Zone at the 2014 Harley Rock Riders would beg to differ.

For a large fraction of the crowds gathered at the historical Richardson and Cruddas foundry at Byculla, Mumbai from November 15-16, the event was every bit about the motorcycles as it was about the bands. While the headlining act was Grammy-nominated band, Mutemath, the spotlight was on the Harley-Davidson Street 750 that Rajputana Customs was commissioned to revamp with a "street, custom look."

The Harley-Davidson Street 750 has been touted as a blank canvas for customisation. This is Rajputana Customs' take on it

Vijay Singh, the man behind the custom motorcycles outfit from Jaipur, said, "As of now we've tried to maintain a very urban frame in a new-school way. We put in superbike forks, ordered old school tyres for it and Harley-Davidson 48 rims. So what we've tried to show is that with a few bolt-on parts and minimal modification, we've been able to completely overhaul the bike."  He further added that for the next phase, their plan is to redo the exhaust, air filter and remap the engines.

This olive green number is the Street 750 modified by Mumbai-based Motomiu, who insist that their version is not "tuned to be a roaring monster" but a sober, everyday motorcycle you can live with

An adjacent stand showcased another modified Street 750 which was given a custom made aluminium exhaust, adjustable T6 aluminium rear sets, adjustable clip on bars, a cowl and a fetching olive green paint job. Mumbai-based outfit, Motomiu, claimed that the modifications brought down the kerb weight of the bike by a significant 35 kilograms.

The Jump Start section, where one could experience kickstarting a Harley, was a big draw for a lot of Harley-Davidson aspirants

While keen biking enthusiasts flocked to the stands to gather more details on the reworked Harleys, a lot of conversation was inevitably lost in the drone of revving engines from the Jump Start platform and more bikes pottering in and out of the grounds. Not to mention, the live performances from the three different stages in the premises.

Part of the NH7 music festival, this was the fifth edition of Harley Rock Riders. Apart from Mutemath, the acts in the line-up at the 156-year old foundry premises included Scribe, Pangea, Blakc, The Supersonics and Zero - all manner of metal, you see. 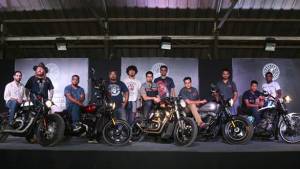 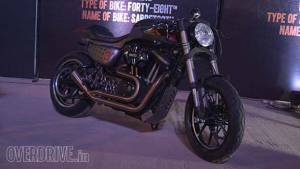 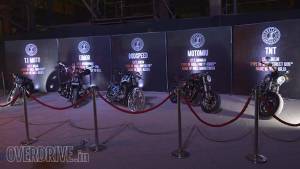