The 2018 Rainforest Challenge concluded today with veteran rallyist Jagat Nanjappa and co-driver Chetan Changappa of Coorg's Team V5 Offroaders emerging as winners. The team overcame constraints like funding and not the most advanced of setups through experience, hard work and great co-ordination between them. 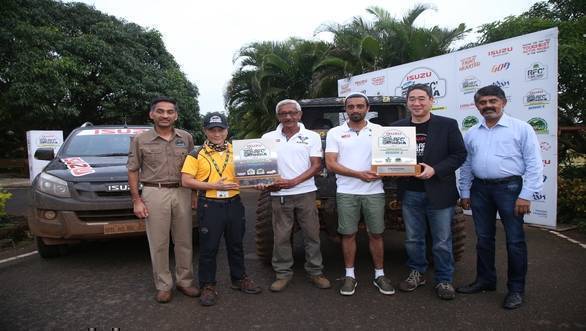 Jagat Nanjappa and Chetan Chengappa, winners of the 2018 RFC India with the organizers of the event

Following them in overall ranking at second place were the Malaysian driver Mervyn Lim (co-driver Alex Tan) of Team G.O.A. Fairmont. He was followed by the winners of the last two editions, Gurmeet Virdi (co-driver Kirpal Singh Tung) of Gerrari Offroaders Chandigarh. The final points tally stood at 2006 points out of 2600 for Nanjappa, followed by 1849 and 1800 for the other two winners.

The winners will represent the country at RFC 2018 Global Series Grand Finale. The total benefits they have received amount to USD 10,000, including the entry fee, airfares as well as support towards car rental in Malaysia. Jagat Nanjappa adds this to a long list of achievements over a motorsport career spanning four decades. He is a nine-time Indian National Rally Riders Champion winning from 1986 to 1996 in the motorbike section, a Great Desert Rally Champion in 1988, Coimbatore Rally Champion of 1992, MASA Rally Mumbai Champion of 1993 and 1994.

The last two days saw participants tackle dense forests and tricky terrain in Maina for SS22 to SS25 before moving to a more sedate but still difficult to navigate final stage in Dona Paula.

Speaking at a prize distribution ceremony held on the final day, Ashish Gupta, the organizer of ISUZU RFC India 2018, and the head of Cougar Motorsport, said that they witnessed an unprecedented intense level of competition this year. They continuously upgrade the toughness quotient of the Special Stages every year, They added a night stage this time around, expecting the competition to be highly challenging. He was extremely happy that  contenders have managed to sail through such tough challenges as well.

He said this proves that Indian off-roading is now attaining maturity and off-roaders here are no less than their international counterparts. He went on to congratulate and applaud all the competitors of ISUZU RFC India 2018 for their exemplary display of offroading skills, valor, hard work and determination throughout the course of the competition.