Bose is known to make remarkable Bluetooth speakers and the new SoundLink Revolve Series is no exception. The Revolve, as the name suggests, offers a 360 degree sound effect with louder volume and better battery life than Bose's previous speakers, like the SoundLink Mini II. We got the top spec, SoundLink Revolve+ and put it to test in areas one wouldn't even imagine. 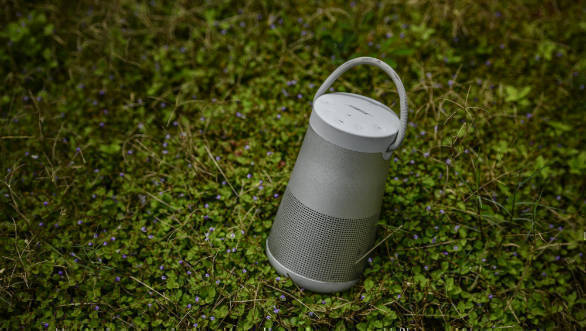 The cylindrical shape of the Revolve+ and the integrated handle reminds you of a lantern. It may seem like the speaker weighs a ton but that's not the case, thanks to the aluminium chassis. In a sea of square or oval Bluetooth speakers, the Bose Revolve+ does stand out and that's something that I liked. There's a choice of two finishes: Luxe Silver and Triple Black. You'll find controls for Bluetooth pairing, power, volume up, volume down and to pause music on the top of the speaker. There's also a multifunction button to connect with Apple' Siri or Google Assistant.

At the bottom, there's a rubberised base and four metal contact points to charge the speaker using the optional charging dock that's sold separately. At the back of the speaker, you'll find a microUSB port and a 3.5mm AUX jack for those who prefer listening to music the old school way. I did wish Bose had provided a Type-C port for quicker charging.

The Revolve+ speakers give out crisp and detailed sound with a sweet treble and mid-range. The bass is healthy and full and can be reinforced by keeping the Revolve+ closer to a wall. The 360-degree sound is really impressive, without any noticeable dead spots as you walk around, In fact, the Revolve+ is loud enough to fill a medium sized room. We also tested the speakers in the damp forests of Chikmagalur as well as the cold and arid Ladakh during the Independence Quattro Drive. Out in the open, there was no drop in sound quality and the volume level was more than enough for a group of people huddled around a bonfire. The impressive battery claims proved justified, with the speaker running out of juice after 14 hours of non-stop playback. Battery charge retention at standby is excellent, and even the cold environs of Ladakh barely brought the charge level down by one or two per cent when stored for four days.

Verdict
The Bose SoundLink Revolve+ is a great speaker, albeit expensive but justifiably so. It may not have a smart assistant built-in for voice controls, like some of the competition, but it makes up for that with clear sound, rich bass and superb battery life.