Yamaha set the ball rolling on their newest CSR (corporate social responsibility) initiative on January 9 with the launch of their Yamaha Child Safety Program or YCSP. The central idea is sound. The program intends to educate children about the idea of safety on the road. This should lead to kids behaving more responsibly on the road and as they speak to their parents and family about YCSP, end up altering their habits and perspective on safety for the better as well.

The program will go from school to school using a range of audio and visual aids to impart simple concepts like the importance of following traffic rules and other things including the importance of helmets and so forth.

In this effort they've also enlisted the aid of a brand ambassador. Before you shrink back in abject terror let me assure you this ambassador isn't human. Yamaha say he's been designed "to appeal to children" and he is a cartoon character with a heart shaped head, cuddly round body and short of limb. It made waddling in stage and off it hard for whoever was wearing the cartoon suit but given how glued today's kids are to the cartoon programming on television, the ambassador's raison d'être isn't hard to fathom. The cartoon creature, ostensibly an alien, is called the Mascot currently since there is to be a contest where kids will visit Yamaha showrooms to drop off their name suggestions leading to the selection of a name and one of the kids will end up with a Rs 1 lakh scholarship. 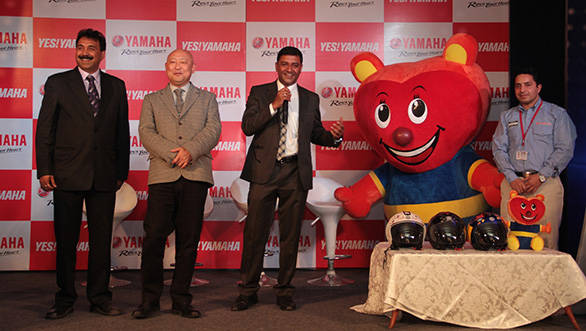 Yamaha India officials with the YCSP mascot and helmets

As I said the idea is sound. I've often said in other columns and places that India's traffic troubles need more than stricter regulation. Someone has to attack the root of the problem and teach youngsters the right values at the right time. These values are the obvious ones like wear helmets when riding as well as deeper, more personal ones like patience and the ability to stand in a queue and wait for one's turn.

What impact this has or can have on parents as an agent of societal change isn't something I'm qualified to comment on. But I'll say this, if you suspend your cynicism for a moment and believe this could work, this kind of education should have a great impact.

You can feel a 'but' coming, right?

As much as I think this is a good idea that can achieve great things, I think it needs another step.

And that in my opinion is for Yamaha to officially launch their kids bikes here. Yamaha already uses their PW50 and TT-Rik9 series of kiddie crossers for safety education, but at this time a parent cannot enable his child's automotive education by offering him something s/he can ride. In the four-wheeled world, a kid can go karting but there's no two-wheeled equivalent right now.

What I'm saying is the initiative would mean a lot more if Yamaha were to offer kids bikes for sale. I know it makes no business sense at all. Sales will be slow and most parents reluctant to buy these. To wit, "I'm not about to give my six-year-old a motorcycle. I'm not crazy enough to endanger my children."

But the fact is that world over young kids ride motorcycles. Some grow up to become world champions. Others go through life having discovered a passion that keeps their fires lit to the end of their days. And most will have terrific skills when they come of age and become of license worthy age.

Yamaha, of course, will make no money from this at all. But I understand that is a given when it comes to CSR initiatives. On the other hand, a few lucky kids will get a childhood like no other. They'll have fun, they'll fall off the bike, most will dust themselves off and get back on and some will hurt themselves too. It goes with the territory. But by and large the lion's share of these kids will get engaged in an activity that is good for them, good in the long run for all motorcycle manufacturers and produce more skilled drivers and riders in traffic in time. I can't see a bad angle here.

To tie in with the current shape of the YCSP, they'll also get a tool where they can use some of what they learn which is an extremely effective way to assimilate skills and concepts. That's why you do chemistry practicals in school. Chemical equations can kill you with complexity and boredom. But watching molecules interact can make them fun and engaging. And you'll always remember the equation when you successfully make ammonia for the first time, or in my case a polymer that liked to explode out of the beaker and take fantastic shapes while coating the ceiling in black goo.

To return to my point, Yamaha's initiative is admirable in goal and definitely something India needs given our horrible accident rate. But theoretical knowledge, cartoon ambassador notwithstanding, isn't enough. Yamaha needs to turn kids into riders. And that requires motorcycles. 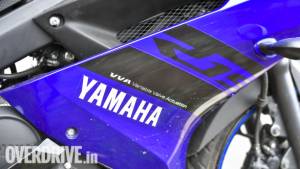