Will Honda launch an all-new scooter on June 12? 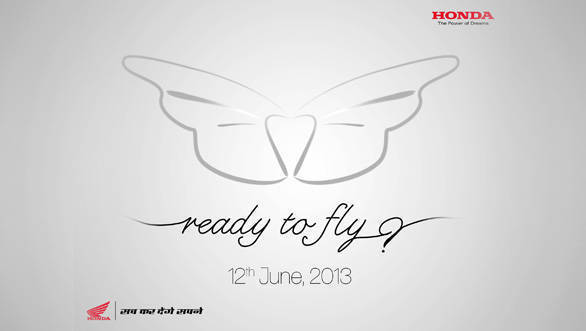 Honda has sent out this cryptic image of a new product set for a launch or unveiling - we don't know which yet - on June 12. A lot of speculation suggests that this is a scooter. Part of this reasoning is the butterfly motif on the invitation card that suggests a unisex or feminine product  we cannot imagine a butterfly being a motif a motorcycle could carry off.

Does Honda, the current market leader in the scooter segment, really need another scooter in the lineup? Honda has led from the front since they arrived with the Activa and that momentum and lead has not been equalled or surpassed just yet. However, apart from a couple of upgrades on the powertrain and numerous refreshes, the fact is that the Honda scooter line up is old. The Activa is the oldest, the Dio has been refreshed recently and the Aviator, well it has soldiered on unchanged until the new powertrain option arrived recently. The Aviator is due a refresh, but again, we can't imagine the butterfly motif being used for a 'male' scooter.

As a market leader, we believe the time is right for Honda to expand their scooter lineup. So what kind of scooter should a market leader be thinking about? A lot of rumour surrounds the idea of a 125cc scooter to take on the likes of the Suzuki Access etc. But that is backwards, it is the Access and its displacement brothers that are trying to beat the Honda.

In that light, we would suspect that either Honda has up its sleeve a new product in position, price and appeal wearing the same Activa powertrain, or something altogether more drastic; a new platform, of which we are about to see the first glimpse.

If the latter is the case, we would think the smallest logical displacement jump (which usually correlates directly to the smallest price jump) would be a 150cc scooter. The butterfly logo suggests we might see the unisex or girly version first.

You might wonder how Honda expects to sell a bigger scooter to a feminine audience. But the fact of the matter is that there appears to be no differentiation based on displacement in scooter market so far. The 125cc Suzukis are considered direct competition to the Hondas, ditto the Vespa, the Mahindra scooters and so forth. So if Honda's customer surveys reveal that customers care about price and economy rather than actual displacement, this might be the right time for the Honda 150 to make an appearance.

What if it is a 125? Well, we would be disappointed. We believe market leaders have to lead. Which means a Honda 125 wouldn't be a market shaking move though it will clearly have positive commercial implications. On the other hand, we believe that despite the excellence of the Activa platform, a full ground-up refresh is overdue and a displacement rise would be welcome in Honda's core scooter line-up itself.

That said, in either case, we expect Honda to announce economy similar to the current scooters, a bit more power and maybe more features. The segmentation of the scooter market is long overdue and we believe we are about to see the first steps on June 12.

HMSI has said earlier that they are working towards an installed capacity of 4.6 million units (46 lakh units annually. To that end, Honda will expand the capacity all three of their plants, the first one in Manesar, Haryana, the second one in Tapukara, Rajasthan and the new one at Narsapura, Karnataka which was inaugurated recently. At the latest plant, Honda is expected to start production of the Dream Yuga shortly, followed by the Activa later this year.