The Dakar is an enormously expensive exercise. First of all, it is really far away. There are a few local riders, to be sure, but the manufacturers are European, Japanese, American or Indian, not South American, or earlier, African. This means you have to take race vehicles, support vehicles, team members, drivers and riders all of that distance. It makes me wonder why a manufacturer would put in so much effort and do the race at all?

"KTM sales here in South America shoot up every time they win," said a rival company's representative to me. This isn't surprising. The South American landscape is challenging and their infrastructure isn't as advanced as, say, the US. So dual sports and dirt bikes do feature prominently in their sales profiles, and associating, say, the KTM SX-F 450 with the KTM Dakar-winning motorcycle makes sense. 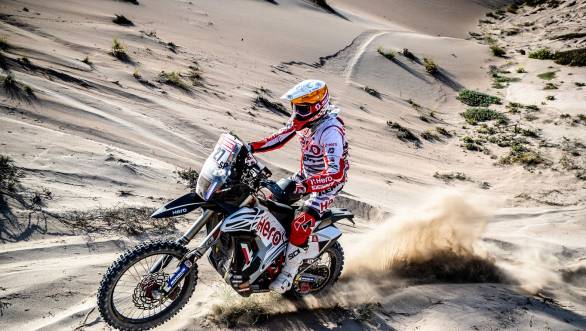 I asked the same question to Hero, which as I write this, is in its third Dakar Rally. They say, "The Dakar opens doors for us. In South America, which is a big market with huge export potential as well as other places." From that perspective, Dakar, as is much motorsport, is a simple marketing exercise. Hero also stays away, so far, from hiring the top riders, which would raise budgets substantially. Instead, it focusses on new talent and to be sure, CS Santosh, Joaquim Rodriques and Oriol Mena have shown consistent talent for the team.

Hero is also getting more involved in the Dakar. The first year, they were using a motorcycle that SpeedBrain updated, but more or less re-branded as a Hero. Last year's bike was new, built to Hero's specification and this year the Hero 450RR has evolved further and the team has had more time with it too. But as Hero officials reiterate, the current 450 is built for Hero, not a continuation of an older machine, or built off something else.

But how does it matter? The customer cannot purchase this machine. Nor are there machines that you and I can purchase based on this either. So if Hero were to achieve outrageously good results at the Dakar, even win, for that matter, what difference does it make to me?

Hero officials cannot comment, naturally. But the XPulse series of motorcycle will kick off their off-road capable motorcycle line shortly. And if Hero has gotten Speedbrain, who run the Hero MotoSports Team Rally outfit to build them a custom race bike, how long before they build a new engine for the race bike too? Who can say that a Hero 450 dual sport based on the rally bike isn't in the offing?

Like the other manufacturers, Hero is learning a lot from the Dakar experience. Motul, for example, has a lab that does oil testing after every stage. This data is useful for the teams, but also goes back to Motul to help improve their oils. Michelin and BF Goodrich report the same workflow.

So the Dakar offers the same opportunities for hospitality, relationship building and so forth as other motorsports do. But it helps the reach of the brand and it helps in the development of its product and engineering skills too.

It does appear that Hero's effort in the Dakar, for instance, is too early for a company that has no products that correspond the the race bike or that segment. But that's the thing about product plans and secrecy - the company always knows more about the future than we do. At this time, Hero says Dakar adds to its personality, story and brand values in South America. It also makes the Hero name easier to recall in the Europe and Africa where the Dakar has a loyal following.

In India, though, the Hero-Dakar association, by all accounts, is an investment into a future where the off-road, hardcore image of the Dakar will find common ground with Hero's ambitions for the Indian premium motorcycle market. Can't wait for that. And cannot wait for the Dakar 2020 as well!