Mexico is a wonderful country. Having never been there myself, I have relied heavily on fairly trustworthy sources to come to this conclusion. One of these happens to be a Dutch photographer who, finding Mexico particularly enchanting, has taken up permanent residence in the place. Other than the friendly people, the tequila (perhaps that's what makes the people so friendly?) and the food, there's another reason I am particularly keen on giving Mexico a visit, especially in 2015. On November 1, 2015, the Mexican GP makes a return to the Formula 1 calendar. I've read stories of what a great race the country offered back in the day. Of how, in 1963, it was the track where Jim Clark equalled Juan Manuel Fangio's record of most wins in a season. Of how, in 1965, at this very track Richie Ginther gave Honda their first Formula 1 race win. Of how, in 1968, it was the seat of a particularly thrilling championship battle that had fans on the edges of their seats, had team principals clutching rabbit's paws and four-leaved clovers for good luck, and had Graham Hill grinning broadly at the very end as he took his second world title at the end of a rather trying battle.

But as the years wore on, Mexico was dropped off the calendar for several reasons, with Formula 1 visiting it for the last time in 1992. After that, the Circuit Autodromo Hermanos Rodriguez (named after Mexican driver Ricardo Rodriguez, who as a mere teenager , was already a factory Ferrari driver, and his brother Pedro) fell to disrepair. And even though since 2002 there was talk that surfaced rather regularly that it would make it back to the F1 calendar, it didn't happen. Finally, in 2015 the track comes back and it holds the promise of a thrilling race. I can already see the cars flying down Peraltada, the famous fast last corner of the track, where Ayrton Senna once flipped his McLaren in 1991, and walked away unharmed even though he was still nursing a head wound that required 10 stitches from a jet ski accident the previous week. Of course, now, there's been an attempt to tame Peraltada with the corner being cut in half and now made slower and less scary for drivers. But there is the chance that the Mexican GP in 2015 will bring to drivers a terrific battle, bring teams a smooth process with all the logistical hassles that F1 can entail being nipped in the bud right away. But more than anything else I hope that the race will give fans reasons to sit at the very edges of their seats once again, even though decades have gone by since the glory days of the race.

But why is it that the Mexican GP is popping into my head with such alarming regularity? I believe it has a lot to do with the fact that the Indian GP isn't on the calendar any longer. Why has Formula 1 gone back to Mexico? Why do we no longer have an Indian GP? And how on earth do we get it back? Well, let's try dispensing with these questions one by one. The reason that Mexico has a GP now is because they redid their track, put in a bid for the race, and were able to cough up that rather hefty sum of money that Big Boss Bernie demands as licence fee for running the race. Why does India no longer have an Indian GP? There were logistical issues aplenty with having Formula 1 in the country. There were heavy taxes that were levied on teams who were shipping in equipment. There was the fact that motorsport, annoyingly enough, wasn't recognised as a sport itself. And there was also the fact that JPSI, having footed that astronomical licence fee for three years straight, felt that they'd done quite enough as a privateer group and that the government ought to step in and take some amount of interest too. Well, when we last spoke to the good folk at Jaypee, they told us that they were indeed making a concerted effort to get Formula 1 back and that they hoped that having a new government in the country might ease the entire process. Well, the timeline being discussed was supposed to be 2016, but we have also been told that 2017 is more likely for the return of the Indian GP. Officially, though, JPSI won't give us a date. All they are willing to say is that they really are making the effort to get the race back. 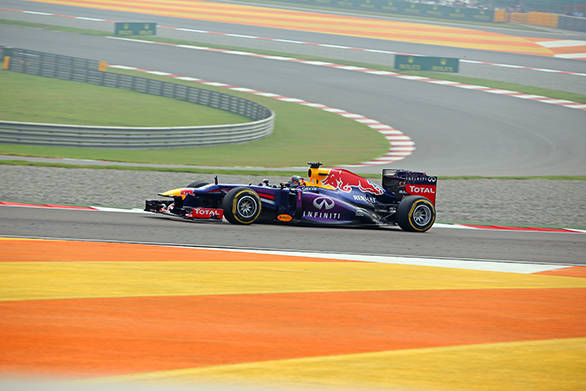 The truth is that unless you're Monte Carlo, Spa or Monza, you're going to have to fight for your spot on the Formula 1 calendar. So how do countries who don't have frighteningly quick single-seaters dotting their landscape manage to hold onto the visiting Formula 1 circus? Well, either these countries are very, very rich, like Abu Dhabi. But they also realise that to keep the race they need to come up with something interesting and enticing enough to hold the interest of viewers. Which is why the desert race is held at twilight, with the sky near orange, and Formula 1 cars blazing down that beautiful Yas Marina Circuit. Or they make sure that they can make the race appealing to fans and to your average tourist all at once. The Singapore GP is a regular fiesta. A festival of music, food, theatre and what have you, with a grand prix thrown into the very middle of it all. If India has to hang onto our Grand Prix, should it ever actually make a return to the F1 calendar, we'll have to work hard at converting the race from a grand prix to more than just that. Well, at any rate, we'll need to do a few things here and there to make sure that your average race goer has it easier. This includes access to the track from the city, tickets that include reasonably priced food and more merchandise and the like available to the fans. Maybe Indian GP memorabilia that is easier on the wallet than official F1 merchandise. So that the everyday grand prix goer has memories to take back with him.

See, every time I talk to anyone who remembers what we often refer to as the golden age of Indian motorsport, I am told that there isn't a real logical explanation of why motorsport faded right out of Sholavaram, Barrackpore, Alipore and Juhu. I'm hoping that the Indian GP isn't added to the list of has-been motorsport glory that the country could once boast of. I'm hoping, instead, that there's a Mexican twist (add a little salt and lemon) to the Indian GP's tale. And that we make it back to the F1 calendar. Soon too.