The dreams of mortals

Good weather and a good race bring out good conversation it turns out. A handful of moto-colleagues and I were sitting at a cafe in the middle of Barcelona. Earlier that day, Rossi'd been victorious and we'd cried ourselves hoarse from our vantage point overlooking the start-finish of the Circuit de Catalunya.
It was into this idyllic evening that I interjected what I believed was a harmless, even intriguing question. That's how it always begins, eh?

"What's in your dream garage then? Bikes only. No budgets. No cars. No vans to carry the bikes."

The youngest one revealed a fascination for large machines that didn't come as a surprise. But it revealed the wonderfully naive and refreshingly uncoloured view of the world that the young have the luxury of. A rosy world that's not yet ragged with the wear and tear of the passage of time. Not tainted by the multitude of experience or poisoned by the steady creep of desensitisation, hubris and decay.

How much will my dream garage reveal about me? I wondered to myself. But I'm not shy or retiring (in any sense), so I opened wide the doors to my garage. Which, as you can imagine, had changed over time and is likely to continue to evolve.

At the top of my list is a motorcycle that brought me to tears. A friend from another publication whom I greatly respect for his unyielding pragmatism wondered how a journalist could dream of a Rs 25-lakh motorcycle. But hey, if I have to curtail my dreams with realistic boundaries, then they're not the stuff of technicolour pyrotechnics, right? 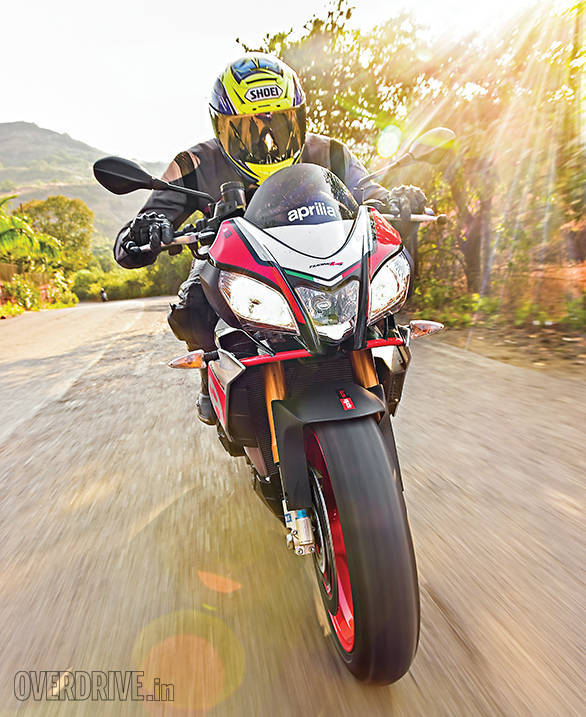 So top of the list is the Aprilia Tuono V4 1100. Riding it felt like slipping into the most comfy pair of clothes I've ever worn. The motorcycle felt so right and fitted me so well that I could almost forget that it was metal and I was flesh. We were born to be together. I just know it. Like a Hindi movie, the villain is money. I haven't enough. But who knows what happens next, eh?

The second bike on my list surprised me. Ferocitas sits proud at two. And when I said those words my chest swelled with pride. One-fifth of my dream was already in my garage. My white KTM 390 Duke still causes my skin to tingle when I walk by the garage on the way up home after my daily swim. There's an extra sizzle I can feel when I ride it, and I've become convinced that it's the one thing I own that I never will sell.

I've regretted selling Fera and Ferocia, my two Yamaha RD350s, and I'm never going to let it happen again. As my wife pointed out, the Tuono is the third motorcycle, after Fera and Ferocia, that made me cry. I still feel a profound sadness when I see a picture of the two of them. And regret the fact that I didn't take more.

In third is the 1999 Yamaha YZF-R1. I was 24 when the 1998 Yamaha made every other motorcycle in the world look fat and slow. I've never heard such a collective gush of praise for a machine before or after. I got to ride one too - thanks Prashant Desai - and I loved it. The details of the memory have blurred. But I remember the elation. Why not the 1998? I read somewhere that the original had some clutch issues that were fixed on the 1999. It's stuck in my head. Naturally, it must be white and red, the launch colours.

In fourth is the Ducati 959 Panigale that you can read about here. Having ridden a series of sportsbikes on the street, I've come to dislike them somewhat over time. I've suffered the aching wrists, and the soreness and the difficulty of riding them around daily has clouded my vision. I have wonderful memories of riding the YZF-R6 (both pre- and post-16,000rpm models). But they've fallen off the list.

The 959 was, for me, like Basher's letters to Reuben. They brought me back. It proved easy to ride, extremely controllable, and I knew deep down that I'd found a motorcycle that will teach me more about going ever faster at the racetrack - something that I find fascinating today. It's not bad to look at either. I can't wait to road test it - to see if it can commute and tour. Ducati says it can. I hope it can. Because I'm already thinking of names.

The final machine in my five-bike dream is all cheek and a bit of a cheat. I want a KTM 450 SXC with a supermoto conversion kit. I'll settle for the 350 also. In my head - I haven't ridden it - it's a narrow, tall single with sticky tyres and a big front brake and tall suspension to kill our roads every day. And the ability to switch to knobbys and a smaller front brake for harder work.

And then I sat back and saw age reflecting in the garage. A garage where wild desire and blind ambition have been replaced with a more focussed selection guided by a clear sense of purpose. It's a user's garage, not a dreamer's or a collector's. A garage meant to be out there in the world getting older and enjoying it. Where odos with big miles and marvellous stories are treasured more than pristine bodywork or low mileage. Sort of like me, then.