The beginning of a 'New Year' brings hope and resolutions that show we still have some faith in our future. While I am quite beyond making resolutions only to break them, I still harbour hope and have numerous wishes to improve the quality of our lives. I wish we lose fewer lives in our country due to road fatalities. I wish we become better and more careful drivers. I wish the authorities make sensible traffic rules and enforce them in a proper manner. There are many organizations and even auto manufacturers, who are working to increase road safety. I wish them all success and hope their efforts result in fewer accidents and deaths.

The government is now working towards making airbags and ABS compulsory in cars and crash testing norms are also in place. I wish this reduces road fatalities. Transport Minister Nitin Gadkari says over 700 black-spots where accidents regularly occur on our highways, have been identified, and will be rectified soon. He also says he is digitizing the process of getting driving licenses to eliminate corruption. I wish this also happens. Gadkari is one of the few ministers and senior politicians taking so much interest in 'road safety'. He obviously means well and wants to reduce road fatalities in India by 50 percent by 2020. I wish this happens too.

While I wish for all this, I am not at all confident about the final outcome. Making plans, introducing laws, changing processes and roads, is all very good and most welcome. But having seen things up close, I have serious doubts if we can reduce the number of deaths or accidents by these measures alone. Please don't get me wrong, it's not like the problems are so complex that they cannot be tackled and resolved.

Ironically, it's the simple things, which if done correctly can make a massive difference. In my humble opinion, if our country adopts just three words and follows them to the letter, we can certainly reduce road accidents and fatalities by half, if not more. The three words are, "Stop; Look and Go". or- "Ruko; Dekho aur Chalo". You would imagine this is common sense and not something to be publicized and popularized with the intention of persuading people to follow this simple tenet.

Sadly, in our country, common sense is not at all common. If anything it's very rare. Anyone who values his life or that of any other road user should automatically "Stop, Look and Go" at every road junction or wherever a road needs to be crossed. It is extremely heartbreaking that this does not happen. People simply do not "Stop; Look and Go". This is not limited to any region, state, city or district. Or any caste, class, sex, age or occupation. The fact is we Indian's do not follow this basic rule.

If we can convince our people to "Stop; Look and Go", then not just thousands but many thousand lives can be saved. We need to educate people and get them to abide by this rule on a war footing. I am sure the results will be immediate and substantial. If almost the whole nation can become aware of recently introduced socially destructive terms, like 'Ghar Wapasi'; 'Love Jihad'; 'Gau Rakshak' and other such rubbish, why can we not find a way to make our citizens swear by "Stop; Look and Go" or "Ruko; Dekho aur Chalo".

While starting a 'New Year', we also tend to look back. Most Indian will remember 2017 for demonetization and GST. Personally, 2017 will upset me for the growth in our pollution levels and the rise of the fringe elements in our society. It was also sad to lose Shashi Kapoor, the great film artiste and star. Amongst the load of tributes published, was a striking photograph of him leaning against a Jaguar E-Type. I have written earlier about some Indian film stars and their love affair with cars, so I will not touch upon that again. But I would like to share the strange bond I shared for a while in the 1980s, with Shashi Kapoor. His son Kunal was a good friend and had a Maruti Gypsy (which he still does) that I had helped in modifying a bit. Being a successful producer of advertisements, Kunal was also keen on making a film on the famed Himalayan Rally. He wanted to use about two dozen camera crews, choppers, etc and create a film to international standards. Kunal regularly borrowed my rally video tapes including the likes of 'In Car Manx'; 'Climb Dance' and even one of Walter Rohl with his famous footwork while driving a Group B Audi Quattro.

One Sunday afternoon, when I visited Kunal's residence in South Bombay, his father was watching one of the videos showing Roger Clark dominating the British Rally Championship in a Ford Escort. Kunal said, "Papa this is Bob, and the rally video tapes you watch every day, come from his vast collection". That's when I learnt that more than Kunal, it was actually Shashi Kapoor who was an avid viewer of the rally films. To such an extent that he actually asked me, "Is this chap Roger Clark really as good as he looks? And what about this Ari Vatanen, I like the way he slides around turns!" 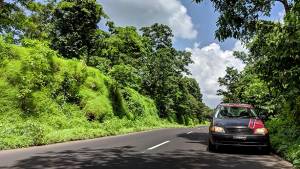