On wildlife on highways

On 29th July, we celebrated the "International Tiger Day". Few weeks prior to this on the night of 13th July, a full grown tiger was seen sitting on the Nagpur-Jabalpur National Highway 7. The tiger was spotted near Rookhad, which is part of the buffer zone of Pench Tiger Reserve. The videos and photos of the tiger sitting in the center of the highway illuminated by headlights of several trucks and cars went viral on social media. Some people even called the police and forest department. When the forest department team arrived at the spot they first cleared the traffic away and tried to make way for the tiger to cross the road and go back into the forest. This is when they realized that the tiger was having difficulty going over an under construction wall. Vikram Parihar, the Field Director of Pench Tiger Reserve, as per some reports said, "The tiger couldn't cross the mitigation structure under construction. A guide wall to avoid soil erosion is to be constructed at the spot where it was trying to unsuccessfully jump over." Several times in the past also, tigers and leopards have been sighted on this busy highway passing through the Pench Tiger Reserve. In fact it was due to this that the National Highways Authority of India (NHAI) was instructed to create adequate wildlife mitigation measures by constructing elevated stretches with underpasses for wildlife to cross from one side of the jungle to the other. Sadly this work is not complete and construction of these underpasses is still underway in some places. This needs to speed up, because a report by the Wildlife Institute of India has shown that between March and December 2019, over 5,450 wild animals, including 11 tigers have been photographed on trap cameras while using the underpasses that are complete, to cross from one part of the forest to the other! This is also possibly the only highway in the world that has signboards saying 'Tiger Crossing'. Now how I would love to take a photograph of a tiger with these signboards. 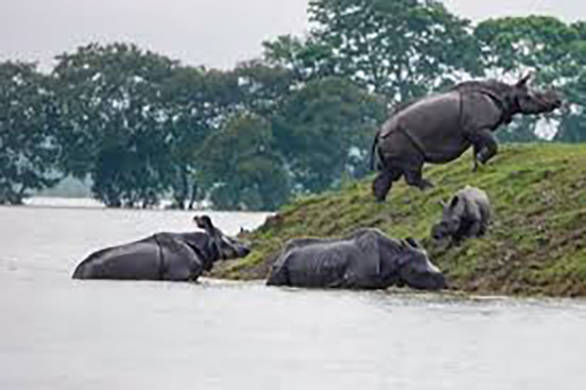 The floods in Assam in July, also submerged vast areas of the Kaziranga National Park, and resulted in lots of wildlife coming out onto National Highway 37, which passes through this rich wildlife habitat. A video of an exhausted rhino resting on the side of highway, while vehicles drive past has gone viral. Fortunately the forest department staff was at the location to direct the vehicles through and eventually they also guided the one horned rhinoceros back into the safety of Kaziranga National Park. 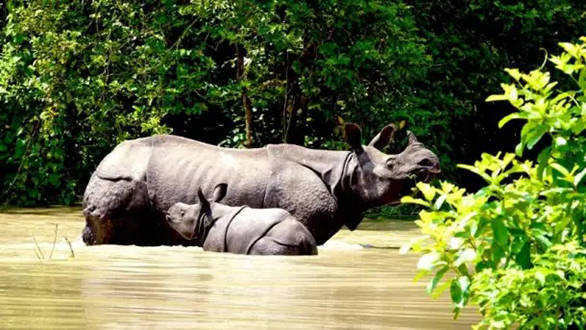 A tiger also came out of flooded Kaziranga and took refuge in the house of Kamal Sharma in Kandhulimari village. To get away from the submerged forest, the tiger came and lay down under the thatched roof of a goat- shed inside Sharma's house. Interestingly, the tired tiger just rested and did not do any harm to either the residents of the house or their goats! The forest department team arrived at the spot and patiently kept a watch on the resting tiger. After some 12 hours, it got up and headed back into Kaziranga National Park and Tiger Reserve. The forest guards cleared away the gathered crowds and gave the tiger a safe passage to return to the jungle. While all the attention was on this tiger in Sharma's house, another tiger was said to be resting by the side of the road on NH 37. Later it apparently crossed the highway and headed into the hills. 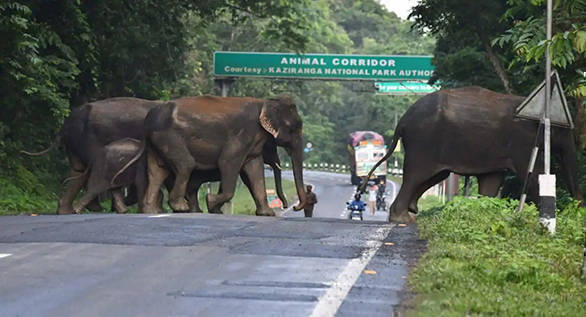 What is sad though is that seventeen hog deer and wild boar died after being hit by rashly driven vehicles. These wild animals were also trying to cross the road to reach higher ground on the other side, but were crushed by insensitive over speeding drivers. This once again shows that we need very strong rules and penalties for road kills. I have written about this earlier, and something certainly needs to be done to reduce road kills of wildlife in our country.