Of rally trucks and motorsport people

I can tell just by looking at a person, whether or not they can drive a truck." The gentleman who'd said this to me one December morning, now seven years ago, looked rather professorial. In fact, standing there, peering over his silver-framed spectacles, an amiable smile on his face, he looked like he was setting off to teach calculus to a roomful of college students. It wasn't easy to picture him turning the wheel of an 8-tonne rally beast in anger. But that, right there, was the truth. Subhanrao Shinde had, earlier that year, gone and won the truck category of the 2012 Desert Storm in an AMW 4923 TR rally truck. 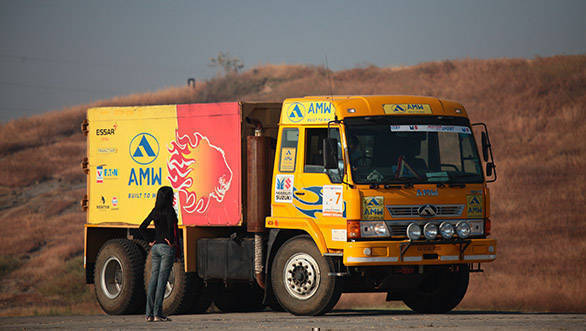 "When I saw you I could tell that you could drive a truck," he'd continued. "Go ahead and drive it - it's a lot of fun!" he'd smiled. Of course, I knew back then that all he was trying to do was encourage me. Though I might have had a broad grin on my face, sunlight reflecting off the braces that I most unfortunately still wore at the age of 25, it didn't take a lot to figure out that I was nervous. The prospect of driving a ginormous truck worried me a little. What if I wasn't able to handle the gear shift, what if I kept pressing down on the brake and the thing simply wouldn't stop, what if I ended up trying to manoeuvre a figure of eight, and toppled the darned thing?! These were just a few of the worst-case scenarios playing out in my head as I scrambled onto the driver's seat. But thankfully, with a little instruction from the kindly Mr Shinde, I was soon motoring along in that very truck.

I haven't thought about that day in years now. In fact, I think I'd almost forgotten that I once drove a rally truck. But then, like most of you, I was told to stay indoors indefinitely, which gave me the excuse to pull out an old hard drive that I'd been meaning to go through for ages. It allowed me to fall down the rabbit hole of old memories. And when images of that bright yellow AMW surfaced, I found myself beginning to type away.

Subhanrao Shinde's day job was that of a driver-trainer at AMW. He was an old hand, who knew those trucks really well. So it was no surprise that he was called into service to drive one of the four AMWs that would compete in the Desert Storm that year. Shinde was soft-spoken, and it was a struggle to hear him over the loud rumble of that 5.9-litre engine. But he certainly knew how to tell a story. As I drove along, with the wretched gear lever playing a spirited game of 'catch me if you can' with me, he spoke of how he and co-driver Anil Singh had spent a full night in the dunes when their navigation system broke down. They only knew which way was east when the sun began to rise, which fortunately helped them get on with their rally. Of how navigating the sands was particularly tricky, because slamming on the brakes was exactly the sort of thing one absolutely oughtn't do in a truck. It would cause the machine to bog down, and slowly but surely bury itself in the desert. And of how, despite the fact that it was his first time taking part in a competitive event, he was already raring to go, and hoping for another shot at rallying. In fact he was hoping he'd get a chance to rally the 4923 TR at the Raid de Himalaya, if AMW decided to go there. That the motorsport bug had well and truly bitten Shinde was evident. 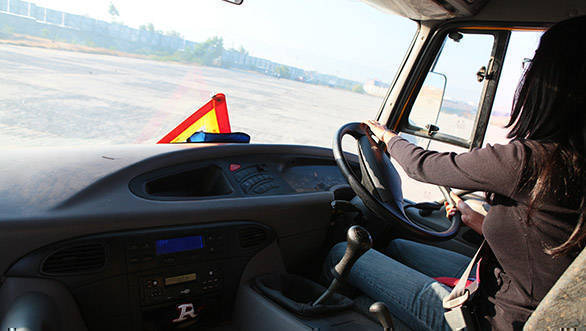 Now, all these years later I still remember what Shinde had said to me when I'd asked him what it took to rally a truck in the desert. He'd said, "One just needs a calm approach to everything." And then he'd thought a minute and added, "That, and courage." Advice applicable to rallying in the desert, and to life itself.

As things turned out though, AMW didn't make a return to the Desert Storm, and as far as I know, all plans of their return to rallying have been shelved. The last I heard from Shinde was when he'd called to thank me for sending him a copy of the magazine in which the story had been published. I don't know what happened to him after that. I can only assume that he's gone back to being a driving trainer at AMW, while still harbouring hopes of making a return to rallying. Wherever he is though, especially given the state of the world right now, I do hope he's well. 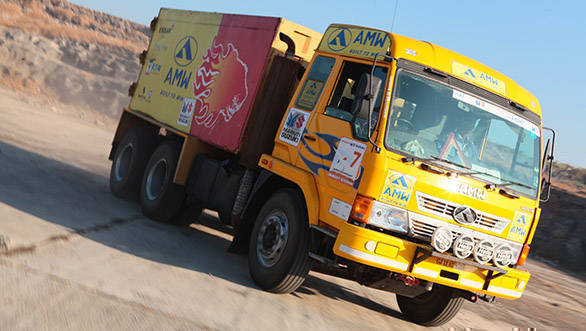 Over the years, my job as a motorsport writer has allowed me very many wonderful experiences. It's taken me to far corners of the earth to watch racecars and rally machines barrelling about. It's given me the chance to drive some ridiculous machines, the likes of which I never would have imagined driving. But what I've always been the most grateful for, is that it's allowed the incredible privilege of meeting some very interesting people. From different parts of the world, of various ages, and diverse backgrounds. People who, more often than not, have been united by one single thing - their love for the sport.

It's also taught me that getting along with a complete stranger often begins with the willingness to just give someone a chance. And whenever this lockdown lifts, and whatever the 'new normal' brings us, I hope we all begin there - by just giving each other a chance. The world could really use some of that right now.

This column first appeared in the May 2020 issue of OVERDRIVE.