Of mountains that must be climbed

"He's going to turn left now," I tell myself, holding my phone up, determined to continue taking a video of the third motorcycle that's making it's way up the hill at Stage 4 of the 2017 Afriquia Merzouga Rally. Meanwhile, the motorcycle that's barrelling up the hill is growing larger, and sounding more threatening by the second. "Oh, but he must turn now!" I tell myself once again, still not ready to stop filming. The motorcycle is even larger now, looks awfully mean and angry, and the point at which the rider ought to have turned left is long gone. From where I'm standing, it looks like the motorcycle is gunning straight for me. And then I realise the truth. The motorcycle is in fact gunning straight for me. "Run!" I tell myself. And fortunately I listen to me. I hastily lower my phone and flee to the right. And not a moment too soon. Seconds later the motorcycle's jumped right over the side of the cliff onto the summit, landed essentially where I had been standing, and then throttle pinned once again, the rider's powered off into the distance, chasing his next way point. My heart-rate's shot up, as has my blood pressure. But at least I've been reassured that my fight or flight instincts are working rather well. Not, however, wanting them to be tested once again, I find myself a slightly safer spot higher up on another part of the hill, hopefully well out the way of the riders. And there I pause to think about what I've just witnessed. 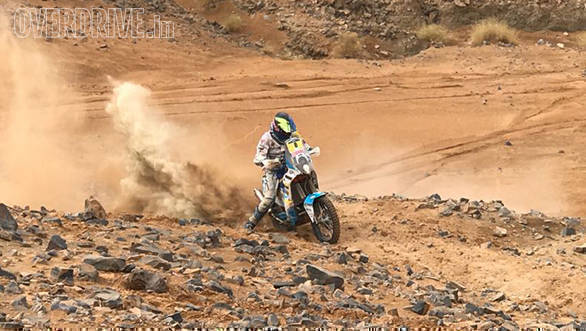 See, the first two riders, Gerard Farres Guell and Franco Caimi, the fastest of the pack at Merzouga at that point, had come to the bottom of the hill, and without hesitation, begun their ascent up the path. They'd chosen to weave left, and then right, powering through the slightly rocky climb, and not letting up on the throttle even once. It seemed like the normal thing to do. The sort of thing that any skilled and accomplished rally-raid rider worth his salt would do. And then Xavier de Soultrait arrived at the scene, remembered from his geometry lessons in school that the shortest distance between any two points was a straight line, and decided that he couldn't be bothered with the trails. They'd only slow him down. Pin it to win it, seemed to be his principle, and so he did. It certainly paid off, given that he won the 2017 Merzouga Rally.

But there were other riders who came after. Who only encountered the trail after so many people had already gone past, that the sand had become loose and rocks had been thrown onto the path and the proverbial going had gotten very tough indeed. And so I watched as riders got stuck on the side of the hill, some falling a few feet, with their bikes sliding away from them. Others unable to make it past a certain point, and deciding it was better for them to turn back around and try again. This time they'd gather some momentum on their way up and hopefully make it. Still others were so badly stuck that they needed to be helped by kindly photographers and videographers, and the coaches for amateur riders who had been stationed there by the organisers of the rally. And finally there were those riders who were so utterly defeated by the scale of the task that they were faced with, that they chose to turn around, accept a three-hour time penalty, and just pick a simpler way to get to the end of the stage. 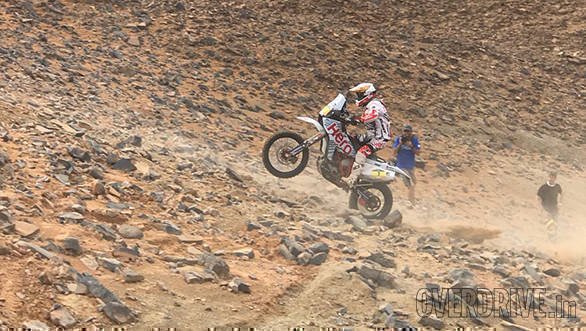 It evoked mixed feelings in me. On the one hand I felt awful for the riders who didn't make it. And it wasn't easy to watch people sliding repeatedly down the side of a rocky hill, struggling to pick up their 150kg motorcycles and start all over again. But other than this there was, I will admit, a tremendously warm feeling that welled up inside of me every time I saw someone actually make it past obstacles, both physical and psychological, and manage to conquer that dratted hillside. I had this sudden impulse to go over to each of them in turn, wring their hands, slap them on the back and say, "Well done, old chap!"

But more than anything else, from my vantage point at the side of the hill, I really did feel like I was being given the tremendous privilege to watch the Universe at work in its most awe-inspiring way. That hillside really was like a metaphor for life itself. Different people, with different temperaments, different lots in life, different experiences, different ways of thinking, all just trying to make their way up something of a mountain. There were different paths being chosen. There was skill that trumped the challenge in some cases. There were nerves of steel that trumped the challenge in other cases. And in still more cases, there was pure grit and determination, and a sheer unwillingness to give up, that got them through the task. And, like in life itself, there was also defeat.

There were two things that I realised at this point. The first, whether or not we like it, we're all going to come upon our version of this hillside, or mountain, or terrifying obstacle sooner or later. There's going to be no way to avoid it. We just have to learn how to conquer this mountain and emerge on the other side, perhaps a little bruised and battle-scarred, but with life lessons learned. The second was that there was no set way to attack the mountain. There was, of course, the path that was laid out already that could be followed. And there were the paths that could not be seen, but could be carved out of rock anyway. It was all up to us. But those mountains, they must be conquered.

Which brings me to two fine motorsport men who are currently faced with possibly the biggest mountains that they've come upon in their lives, in the hopes that they'll pull through stronger than before. Billy Monger and John McGuinness, please fight, and please don't give up. If you can manage to conquer your mountains, it gives the rest of us hope that we can too.