Of motorsport memories and memorabilia...

The background score to my life this past month has been the clinking and clanking of the various parts that comprise a racing simulator. Interspersed with my husband, Ronny, using some choice language to express his displeasure at the Windows OS to which the CPU on his rig is connected. Every so often, amidst the sounds of the motion platform skidding around the place, the seat pitching, or the stomping of the pedals, there's an additional bit of racket. Like the sound of the keyboard or mouse clattering to the floor, as Ronny carries on oblivious to anything outside of the virtual reality that he's immersed in. I sometimes find myself reluctantly getting up to retrieve whatever device has been jostled of its place by the shaking and shivering of that contraption that's part man, part machine. It's on one such trip to the simulator corner that I pause for a second to take a look at the keepsakes strewn about. A couple of racing overalls, an extra steering wheel to be swapped out whenever the virtual racing world demands it, some trophies and medals. None mine, of course. And then I spot a piece of motorsport memorabilia that is mine. Something that I've brought back from a race weekend. And it transports me back in space and time. 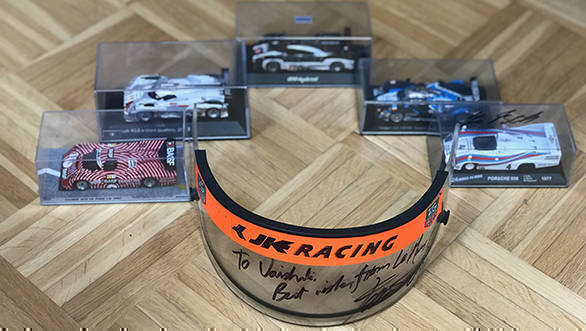 It's a bitterly cold night in 2012. I've actually got no idea at all what the time is. I'm just about able to keep it together, shivering, and all the while wondering how June can manage to be so very cold. My corduroy jacket is proving to be a poor choice of outfit for the task at hand. Which just happens to be standing by the side of the track, watching those glorious racecars barrel down from Indianapolis and into Arnage corner. Sometimes it seems like my fingers are moving of their own volition, the clicking of the shutter-release button on my camera merely an involuntary response to the cold. The truth is a part of me can't believe that I'm actually there, in that very moment of time. After all, it's the 24 Hours of Le Mans - a motorsport pilgrimage on which I'd promised myself I'd someday embark. And actually being there, standing at that corner, soaking in every single bit of motorsport history that Le Mans is steeped in, is one of the most surreal experiences I've ever had. It's also unforgettable.

In fact with each visit to Le Mans a moment from that particular edition of the race remains etched in my mind. In 2013, I remember the stanchion barriers come up at the Gulf Aston Martin garage soon after Allan Simonsen's crash on Lap 3. It was a confirmation of everyone's worst fears about that horrifying accident. In 2016, I remember watching the last few laps of the race not from within the media centre, but instead at a screen where fans had gathered in Le Mans village. I watched as race leader Kazuki Nakajima's TS050 Hybrid ground to a halt on the straight, just before it was about to begin its final lap at Le Mans. I'll never forget the stunned silence that descended on the entire paddock, broken suddenly by the shouts of "Unglaublich! Unglaublich!" (German for "unbelievable!") from a Porsche fan in the crowd. And in 2017, I remember the top bosses from Toyota, who'd again failed to win, visiting the rival Porsche hospitality area to congratulate the victors. But there's nothing quite like recollecting my meeting with the legendary French journalist Jean-Marc Teissèdre, who as I was beginning my first Le Mans adventure, was embarking on his 41st Le Mans attendance, to keep me humble. Imagine what memories Teissèdre has tucked away in his mind!

There's another memory, though, one that's surfaced thanks to the souvenir I find tucked away in the simulator corner. In 2013, I was tasked with shadowing Karun Chandhok, in his second attempt at the Le Mans 24, this time with the Murphy Racing Prototypes LMP2 outfit. I remember waiting outside the garage for him to emerge after the race, because I needed a few quotes to complete my story. Karun, who was set to drive back to the UK immediately was in a bit of a hurry. So I accompanied him to his motorhome, where he made himself a post-race shake and began packing, all the while answering my questions. By the time our interview was over, a crowd of fans had appeared outside the motorhome, queuing up for autographs. It was when I had thanked Karun for his time, said goodbye and begun walking back to the media centre, that he suddenly called out to me and handed me the visor of his race helmet that he'd signed. Karun's a good sort, and I truly appreciated the gesture, but back then I remember also being very embarrassed. Mostly because I was worried that the fans there must have thought I was some sort of stalker who'd broken into the motorhome, been shown the door, and then as some sort of consolation, had been given a keepsake for my troubles.

Well, it's seven years later and I'm less embarrassed. Partly because it's unlikely I'll ever run into those fans, but also because I have a newfound appreciation for all of my motorsport memorabilia, especially something that's actually gone the distance at Le Mans. If things had been more normal, I suspect I'd have had a pretty good chance of being back there this year, listening to actual racecars and race fans kicking up a din, instead of the cacophony that is the eSports championship that has invaded my home. But finally spotting that helmet visor that did lap after lap of the Le Mans 24 has cheered me up, and thanks are due to Karun. After all, if I can't be at Le Mans, at the very least I've got a tiny piece of Le Mans at home!