Of December and destiny...

Does December terrify you? It does me. Okay, perhaps terrify is a strong word. But December has a way of giving me a little bit of a fright. After all, the last month of the year marks, in some ways, the beginning of the end. It signals the fact that another year is about to come to a close. It marks another significant period of life gone by, swept up in a haze of to-do lists, seemingly mundane tasks, and deadlines that must be met. All the while the pages of the calendar flip rapidly forward. And then suddenly there it is - December, eyes narrowed, staring you in the face, tapping its foot impatiently, asking what you've done with all your time and whether you've accomplished everything that you had set out to. Yes, December certainly does give me a bit of a fright. 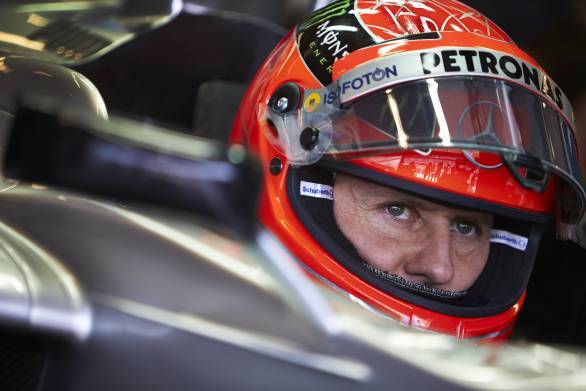 But there's another reason that I find myself getting a little restless around December. After all, like so many other Formula 1 fans, and motorsport fans, I find myself thinking back to one December day, not too many years ago, when the news filtered through that my childhood motorsport hero had been in a near-fatal skiing accident. This December, the 29th to be precise, will mark four years since that dreadful day. And in these four years, there's been very little positive information that has trickled out into the world from within the Schumacher camp. Every single time I think of the almost surreal fate that one of the most accomplished racers in the world has suffered, it terrifies me even more. And it makes me realise that there's more than just a year to take stock of. December makes me take stock of life itself.

This year I probably wouldn't have sat and dwelt on Schumacher's accident as much as I ended up doing, had it not been for the fact that Facebook, in a never-ending attempt to dredge up the past, brought forth an old interview of mine from back in 2011. And things all came flooding back. It was at the first Indian Grand Prix that I'd managed to wrangle a one-on-one interview slot with him, after haranguing his manager Sabine Kehm rather a lot. I can no longer remember every single detail vividly, I think my nerves got the better of me. But there are a few things that stand out from those 20-odd minutes. The first was that Michael Schumacher ended up being a lot nicer than I expected. I don't really know what I'd expected, but niceness somehow hadn't figured on that list. The second was that Schumacher turned out to be a fairly philosophical chap. Amongst the many things he'd said about the situation he was in at that time while racing for Mercedes, and his recollections of his many motorsport memories with Ferrari, were a few thoughts that really stood out. But perhaps the one that sticks out the most today is his response to the first question I'd asked him.

"I believe in fate," Schumacher had said. "Sometimes fate can be positive, or negative."

As I type this out today, I have goosebumps. For Michael Schumacher, even back then, had been aware of the fact that no matter what you do, no matter how many trophies you take home, no matter what your score is in life, everything is somehow already accounted for. There's the invisible hand of fate that guides you along the path of life, pushing you towards those bends in the road. Every once in awhile what lies beyond the bend in the road is positive, and every once in awhile, it's negative.
There are a couple of other things that stand out from what he said. One was, "We're all human, we all make mistakes, although I don't want to make mistakes," a sentiment that I'm sure we've all felt at some point in our lives. And the other was when he spoke about how he could achieve the goals he hoped to achieve with the Mercedes team, and the time frame within which he hoped to do it, "There is a limited amount of time and I have to see how I can deal with this one. There are still many years ahead for living my private life after."

Once again, I have goosebumps. Because it's only today that I see the stark contrast between the two sentences - the "limited amount of time" juxtaposing with the "many years ahead". It's fate having a bit of a laugh I suppose, because, well, that's what fate does.

So, as we approach the end of another year, I have this to say to you. Very often, we tend to put life into context only when we think of debilitating injuries, near death experiences, or when we think of death - or Death - itself. But maybe it's important to think of life and its finiteness a little more often. Because only when we acknowledge that our days are limited, and that we aren't here forever, do we truly start to take stock of life.

And taking stock of life can be a humbling and liberating exercise all at once. It makes us realise how utterly insignificant we are in the larger scheme of things. But at the same time, it forces us to live as much as we can and as well as we can, making the most use of the time that we have and the talents that we've been blessed with. And it brings us to that most important realisation of all - that all we truly have is here and now. And we've got to make it count.