Of apexes and racing lines

There's nothing more intimidating than a blank page staring you in the face, especially when you have a deadline looming large over your head. It's the same sort of feeling that I get at the beginning of each year. That feeling that there are 365 days that stretch out ahead of me. Days that must be filled with new adventure and plenty of activity. Activity that is in some way or the other productive. And, if the aforementioned activity can be carried out at a racetrack or at a motorsport event of some sort, then all the better. In fact the more number of days that I manage to pencil into my calendar as days that will be filled with motorsport, the more I'm likely to see the silver linings and ignore the clouds all through the year.

Of course, I'm not the only one.

While I'm busy at the beginning of each year trying to mark off races and rallies that I will manage to watch, either in all their earth-shattering-eardrum-splitting glory, or on the telly, there are a whole bunch of racecar drivers and motorcycle racers who are anxiously looking at their calendars as well. There are usually racing series available as options to them, but it's the finances that are required to land themselves a race seat in these championships that proves to be the true challenge. As one racer, clearly sick of being asked what his plans for the 2015 season of motorsport were, so succinctly put it, "My plan this year is to rob a bank!"

Sure it's a line he's delivered flippantly. But even as he says it, I can see behind the grin that the line is delivered with, a glint of sorts. This burning desire that he has to somehow land himself a race seat this year as well. And I like catching sight of that glint. In the sometimes cynical world of motorsport, it reminds me, every single time I manage to glimpse it, of the incredible resilience of the human spirit. That willingness to fight against all odds to achieve your goals. And it's not just race wins and trophies that I speak of. Sometimes it's the race to race that's the real challenge and winning this sort of race can be so very rewarding.

A year ago, when the pages of the calendar flipped from 2013 to 2014, I remember talking to more than one racer who a year hence is happier. In some cases these racers have managed one round in a championship they've been trying hard to be a part of but have found too expensive. But there's still the thrill of having managed to take a Sparco-clad footstep in the right direction. In other cases it's been a chance at their first international event. They might have been beaten silly, but they're still smiling because they've had it handed to them by the best in the world. Now they know where they stand and how much further they need to go. And in some other cases it's been the rewarding culmination of years of struggle. The pure joy of finally making it to that event.

It's the sort of joy that I would imagine CS Santosh felt as he piloted his KTM Rally 450, injured shoulder, broken toe and all, at the treacherous Dakar Rally. At the beginning of 2014 Santosh had spoken to me of his plans of competing in some rounds of the World Cross Country Rally Championship, with the aim being to start the 2015 Dakar Rally. As I was typing this, fifteen days into 2015, Santosh was one day away from completing the Dakar. And he's since finished the rally rather successfully!

He's come a long way from that kid who back in the day saw someone win a supercross race in Bangalore and thought to himself that he'd like to give it a go as well. Back then the dunes of the Dakar seemed a distant dream. Today there are kids who are reading about Santosh in the papers and thinking, "Heck, we'd like to have a shot at that!" Isn't it wonderful the way life has a way of coming a full circle? It's rather like a racetrack - in some ways you finish exactly where you start.

I was recently given a somewhat informal lesson in how to get right the racing line. I was told that you need to be able to see it. You need to be able to see the first apex, and once you've managed to hit that apex, your eyes need to be fixed firmly on the second. That it's only when you are able to see clearly each apex that you can hit it correctly. And it's the sum of these apexes rightly tackled that gives you the perfect lap. And it's this perfect lap that's likely to help you take the chequered flag. But it's all about having a goal in sight from the first corner to the last corner. Even if that goal is something as seemingly unattainable as the Dakar. Because life, even with all its uncertainty, usually has a way of ensuring that all things that are truly striven for are obtained.

So in 2015, aim for those apexes. After all it can't be a coincidence that the word apex, racetrack and mathematical definition aside, also means 'success'.

The racecar driver and the law of attraction

On Jules Bianchi, the Japanese Grand Prix and our superheroes 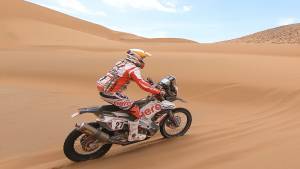