Motorsport and the power of mind...

There are certain things that living on a frozen lake for three weeks is bound to teach you. Like the importance of wearing umpteen layers of clothes, to ensure that you don't sneeze out ice cubes on sniffing some pepper, even if it means that your mobility is severely restricted. That if you don't want to fall and crack your skull on rock solid ice, it is sometimes simply safer to shuffle your feet and slide along the frozen surface, than attempt taking bold steps. And that, for reasons it is rather impolite to go into great detail of, the concept of a waterless toilet in sub-zero temperatures makes perfect sense.

More pertinently though, living on a frozen lake can teach you that when temperatures go above zero degrees in the night, there is good reason for the looks of worry that are likely to cross the faces of people. After all, it's only when the temperatures are below zero degrees at night that the ice really does remain frozen solid up till a good 60 centimetres below the surface. And the ice remaining frozen is imperative to ensure that so very many of the people in this part of the world, Mr Claus and all his merry friends included, can do what they appear to enjoy doing the most. Go racing!

And it was at this very frozen lake in Arvidsjaur one morning, rather bright and early, I had the pleasure of making the acquaintance of two decidedly quaint personages. Wearing a bright neon green jacket that helped you spot him from a mile away amidst the many tufts of snow, stood a gentleman named Max. A broad grin on his face, he was eager to get into his car, strap himself in, and tackle the tricky business of getting his racing lines right. As I stood there talking to Max, another figure padded up to us. Hanspeter wore no weatherproof jacket, just a shirt with a bright red cardigan on top of it and a merry grin to match. They were both as enthusiastic as a pair of kids in a candy store. Of course, instead of a candy store, there was ice as far as the eye could see. And instead of a pair of kids, it was Max and Hanspeter - aged 76 and 84, respectively. 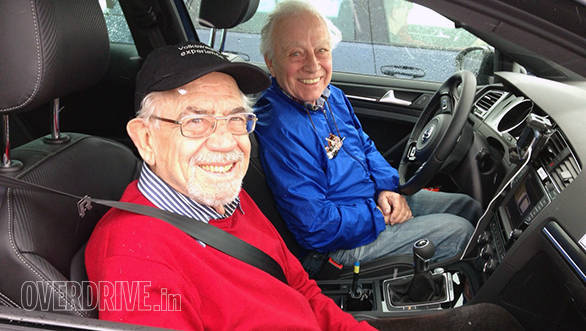 The cheery duo of Hanspeter and Max

Over the course of the next two days, I watched the two grand old men attempt to perfect their drifting style, reinforce their knowledge that the shortest distance between two corners was a straight line with the accelerator pressed firmly down. That you needed to contort your body into all manner of uncomfortable positions to see clearly where you wanted to go and then firmly point your steering wheel in that direction. And I watched as they tirelessly put in lap after lap at the ice track. There were other people less than half their age dropping off for quick breaks here and there, fatigue getting to them. But not Max and Hanspeter - they were more sprightly than Peter Pan himself. And that's when I started to think about the power of the human mind.

Think about it. What do you need in order to be able to go around a racetrack all day long, without tiring too much, other than a car with a decent set of tyres and enough of the smelly stuff in the tank? You need a decent pair of eyes that will help you see where you need to go. You need arms with enough strength to turn the steering wheel in the direction that you need to go. You need a pair of legs, to help you press the accelerator to hotfoot it to the next corner, and brake in time to prevent you going off track at said corner. But more than that, what do you need? A mind. A mind that allows you to focus on all of what you need to do. It can't wander off and dream about the picnic lunch you're going to pack for the next day's Bobsled Ride and it can't allow you to believe that you're tired and need to stop. It cannot allow you to feel fear and it can't allow you to take things too easy either. I'm told that it needs to be a little like the handy needle on the dashboard that helps you keep track of your oil temperature. Not too hot, not too cold, but centred, concentrated, calm and balanced.

Evidently it's a calm, centred and focussed state of mind that has allowed Max and Hanspeter to make it to the ripe old age that they've reached - all the while planning motorsport events and hillclimbs and rallies back where they come from, and competing in them too. And they seem to have done it with both a competitive streak and a smile on their faces all at once. Committing themselves to motorsport, but also committing themselves to life and all that it has to offer. Taking pleasure in the growl of an engine note, the sound of tyres squealing on the one hand, but also in the music of the life itself. It's a philosophy that Hanspeter tried to get me to believe in when he caught me drinking a glass of water (plain, no giggles in it) and said, "Careful, if you only drink water, you'll get all rusty on the inside."

But jokes aside, what I learned from watching these gentlemen drivers hammering down times as they went round and round that frozen lake was that in order to be competitive, not just against rivals, but with yourself and the clock as your biggest enemies, you need to be able to push yourself. And for this, you need a sharp mind. A mind that repeats to you a series of commands to follow - flatout, brake for the corner, look where you want to go, hit the apex, on the gas again, repeat sequence. And how do you keep your mind sharp? By repeating the sequence all through, as many times as possible. It's a vicious cycle and an endless ring, this quest for speed. But somehow it all begins with the mind. And like most things in life, it all begins with a thought.