The recent amendments to the Motor Vehicle Act have been roundly hailed as a step in the right direction. I've no truck with this. Raising the fines and all that, in my opinion, was long long long long overdue and it should help the police do more about our inherent unruly behaviour.

I say should, because as we have discovered over time, Indian jugaad is not just a business school case study. It is the same lateral creativity we use to break and avoid new systems. How will these new fines, the provisions for electronic surveillance and all that be beaten by everyday citizens? I am filled with dread. And with a, er, morbid excitement.

But to be perfectly honest, I am also deeply disappointed. Because the amendments target what the media touts - popular perception - and to a smaller extent, what the 'experts' behind the proposals perceive of traffic and transportation. It is obvious that none of these, neither the big fat journalists nor the experts, ride bikes often. No, this isn't one more exhortation that everyone should be riding two-wheelers. Although we all know, that they, really, should.

The point is that some of the importance of the bill is derived from our shocking accident rates. And this is not a perception problem. A truly catastrophic number of Indians die in traffic and something needs to be done.

But the more I read the amendments, the more I think that the situation is like this.

Imagine that there is a wall in front of which a firing squad executes a line-up of people every 15 minutes. One day, the media comes along, films this process and remarks that the blood stains on the wall look very gory. Then the people behind the firing squad get very concerned at the negative coverage and decide that we must repaint the wall between every line-up. And maybe shoot two people less per line-up. And let's upgrade the guns so that they don't create so much splatter.

Looks better, but the problem remains.

To wit, the new clause about juveniles causing injuries or deaths. What numbers show that this is a statistically significant issue in India that needs tackling with such importance and speed? Is the number of juvenile-caused deaths/injuries even a fraction of two-wheeler deaths? But the graphic videos run endlessly on news channels and in your social feed. That's the power of popular perception, it sometimes hides the real problem.

And that's what I think of the new act. It's better but it fundamentally chases issues that are popular rather than the real causes. Let me explain.

Because of how much larger the two-wheeler market is than the car market, and how much more vulnerable two-wheeler users are, we make up the big chunk of the death and injury statistics of the Indian traffic accident. And yet, the act substantially underlines the mandatory helmet clause and carries on. The other provisions that affect us are all in the fines and penalties section. Which is a step forward, but as I said right in the beginning, I cannot wait to see how many new ways to subvert this system are coming to a traffic intersection around the corner from you.

How do you protect the vulnerable, and wilfully foolhardy two-wheeler user? Should we just let Darwin handle it? Obviously, as effective and bloody as that solution is, it isn't acceptable. I mean we might try to bribe everything we see, but we are a civilised society, right?

Here are three of my ideas. Feel free to add yours to this in the comments.

1. Stop messing about on helmets

Let us be clear that the only way to enforce helmets is to enforce the crap out of the law. Giving one, two or 16 helmets free with a bike isn't a solution. Making unenforceable laws about not being able to buy fuel without a helmet won't work either. The petrol pump attendants don't give a rat's arse about the silly law.

Instead, tell the police that they aren't allowed to spot fine a helmet-less user. They can only issue a slip and impound the two-wheeler and license. The rider must present him/herself in court and pay a hefty fine to retrieve the license and two-wheeler to ride again. Second offence gets you banned for a month. Third offence, banned for a year. Fourth offence, gets your license suspended for life. That's liberal in my book but a menacingly slippery slope.

This is enforceable because there is no room to negotiate. When the body cameras arrive, the police themselves will find it hard to negotiate out of it. A lack of a helmet presents as a pretty binary situation. Statistics shows the consequences of not having one on during a crash are pretty binary. Why should the legal consequences be any different?

2. Let's clean up the license system

This has to be done in two stages. The first stages is purely logistics. The existing framework needs to work. The guys testing the riders need to test, not hang around looking for bribes. The riders actually need to demonstrate riding skill. Unfortunately, riding motorcycles is more than just balance and hand-eye coordination. The current licensing tests cannot accommodate this complexity.

In the next stage, we should introduce a tiered license system. We can blindly follow the European structure for simplicity's sake. Our helmet standard more or less does this anyway - we use the ECE 22.03 as a basis for the helmet standard, unless I'm very much mistaken. The European license tiers should work as well. Just like we created a completely artificial sub-4m car category, we can create a learner class of vehicles and licenses.

Let the kids learn to ride before daddy can step in and buy them a CBRZXGSXRR-1000RF.

Yes! This point seems to escape even the erudite. Traditionally, all safety-oriented technology and laws have been forced upon the masses. The mothership's attempt to save its realm from itself, as it were. But it doesn't have to be like this.

You, each one of you, can make a difference. Budget Rs 20,000 extra to get an ABS-equipped motorcycle. Budget Rs 50,000 to buy good riding gear and use it. Spend Rs 25,000 a year visiting a good riding school, and you'll more than recoup this money in pure enjoyment and skill.

And here's the freebie. Ride well! Pay attention, focus on the present and ride like the swift, courteous, skilled rider you think you are.

Better riding: How to ride faster and safer in 2016

Better Riding: Up on the pegs 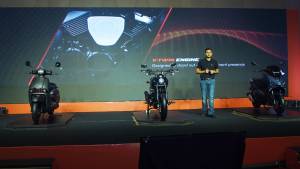