At the Berlin ePrix this year, Formula E announced its intention to go to Saudi Arabia. The championship has signed a 10-year deal with the country, starting December 2018. Understandably, the announcement raised more than just a few eyebrows. Formula E has committed to a country where, at the time of the announcement, the ban on women drivers was yet to be lifted*. An attempt was made to calm ruffled feathers by saying that Saudi Arabia had requested that even if there were no female drivers competing in the Formula E championship when the race was held in Ad Diriyah, that women be invited to take part in some sort of on track activity. Potentially driving/racing in a support class. 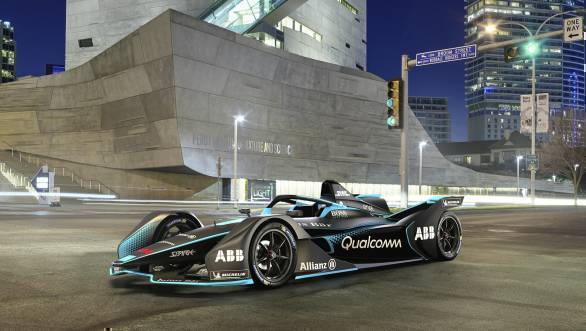 The new Formula E machine that will be used in Season 5 of the championship and will take to the track in Ad Diriyah, Saudi Arabia

Two weeks after the Berlin ePrix, was the Monaco Grand Prix. A fairly prominent female motorsport presenter tweeted, upon seeing grid girls at Monaco, that it seemed like the world of motorsport had taken a step backwards. A follower asked why it was then, that this very same presenter went to the ROC in Saudi Arabia in December 2017. Her response shocked me. "... going to somewhere like Saudi and being able to show other women that they can achieve and be more liberal is a great step forward. The state is slowly starting to improve women's rights and I hope that if I inspired just one female, I have done the right thing," she said. Her response pointed out her ignorance about the state of affairs in Saudi Arabia, and a lack of understanding of women in that particular country. It is not uncommon for the West to believe that people in other parts of the world are oppressed by choice. Internal freedom struggles and the fight for rights is often overlooked. A problem becomes a problem only when the West chooses to acknowledge it, or offer their help.

At the time that this tweet was posted, the ban on Saudi women driving was a month away from being lifted. At the same time, prominent women's rights activists, some of whom were key players in the fight for women to drive, were being arrested by the very regime they had protested against. A regime that had finally agreed to lift the ban that was responsible for the othering of one half of the population. The fact that someone who should have known better, didn't, was just part of the reason that I was shocked. There were other truly awful aspects to that tweet. It seems to imply that Saudi Arabian women need it to be demonstrated to them that they can indeed be more liberal. That they can aspire to driving, to careers, to goals. Which is insulting. Just to be clear, the women in that country aren't looking for anyone to show them the way forward. They don't need to be taught that they can accomplish a whole lot, and they don't need inspiration in the form of a saviour who can show them how it's done. They are well aware of what they are capable. Their plight has nothing to do with them underestimating their own abilities. Instead it has to do with a cruel regime that has systematically denied them their rights.Fighting for those rights has led to, and continues to lead to, severe punishment.
Articles from prominent news media from around the world pointed to the fact that the seemingly liberal, forward-thinking, crown prince, who was so keen on bringing reform to the country, was attempting to rewrite history. The arrests of women's rights activists pointed to the fact that the narrative that would go out into the world would be one of his choice. Not one where people fought for their rights, but one where a benevolent leader came in and did the right thing. In light of what is happening, motorsport repeatedly making commitments to Saudi Arabia is terribly distressing.

See, being allowed to voice one's opinion, without consequence of punishment is a privilege. One that we need to use responsibly and with respect. Especially since it's a privilege that isn't extended to everyone around the world. More importantly, something like motorsport (all sport) is a tremendous privilege. One that ought to be contingent on good behaviour. When racers face bans and have their licenses taken away for indiscretions both on and off the track, how can a country not be held accountable? Going motor racing in Saudi Arabia, even if you try to put a shiny coat of liberal paint on it by having women drive at the event, does not take away from the fact that the country is a human rights nightmare. I often have colleagues from other parts of the world ask me whether I believe the reports of the brutal rape cases in India could be the reason why more international races don't come to India. I've always said that isn't the case, and I'm all the more convinced of it now. Maybe if we continue to treat the women in our own country in the abject manner in which we do, but had massive oil wells, and pockets full of gold, motorsport would come aflocking! Isn't that a terribly dismal realisation to have made?

Which brings me to this. There are always multiple narratives in the world. The ones that dominate, are usually controlled by the rich, by the powerful, by the privileged, by the "haves". But it's our responsibility as individuals to make sure that we consciously search for the narratives of the "othered". It might be harder to find, their voices might not be loud enough, their faces might be obscured, but without these narratives, we hear one side of the story. And when we hear only one side of the story, we make a choice  a choice to be complicit in so very many wrongs.

*The ban on women driving in Saudi Arabia has been lifted on June 24, 2018