Five things I do to every new motorcycle

This is almost a standard list for me. It isn't in order but this is where the personalisation of the motorcycle begins for me. Personalisation means just that, it is personal. So this list isn't meant to be prescriptive as much as it is meant to be descriptive. My goal, as ever, is to make the bike more fun to ride, safer to ride. After these are done come the questions about enhancing performance and so forth. 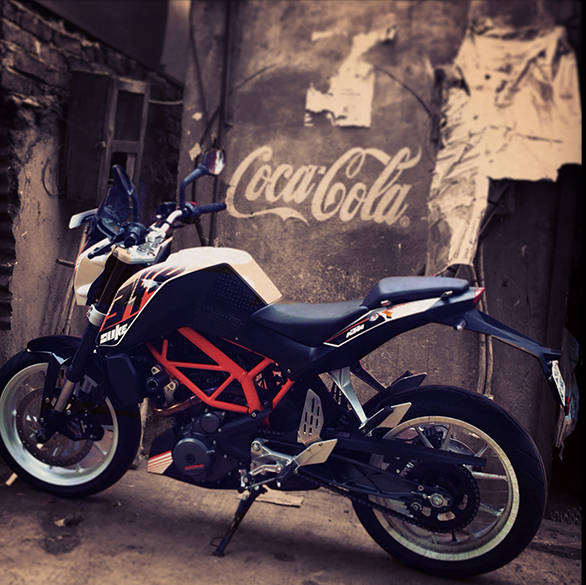 Bikes fall. This is true and this is unavoidable. When they fall, though, you can help them get back on the road with a minimum of damage by giving them some protection. I've used R&G gear on my previous bike and now use the cheaper but just as effective jcMoto bits. As stock, the bike will usually come with a crash guard ahead of the engine. It is a crash guard and not a leg guard. In the case of the 390 Duke, it is a radiator guard which bends easily in a crash, taking crash forces away from the radiator. I like to replace that with jcMoto's frame slider that mounts on a machined from aluminium bracket that sits neatly on the engine mount and then mounts the Delrin slider on top. The other bits I add are a swingarm slider (which did rather well when a colleague crashed my previous bike), a fork slider (a friend recently impressed upon me how much they work) and if required a bar-end slider. The idea is that the delrin will grind away rather than catch and flip, allowing the motorcycle to enjoy a relatively trouble-free lowside in a crash. 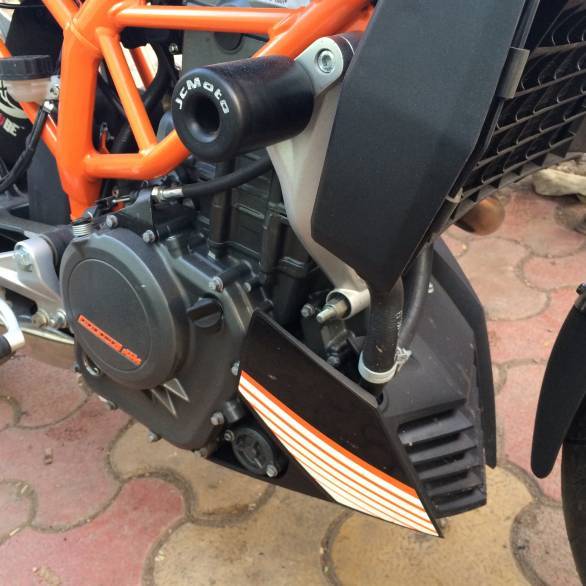 I know they're almost a fashion statement and you can get them LED-illuminated and what have you. But I pay attention to only one thing. The numberplate must be legal. As soon as that is done, I forget entirely about it. Now you get plastic plates that are fantastic because all of my previous ones have tended to corrode over time. All this will change, of course, once the security numberplate rules come into force. Why are numberplates on this list? I've lost count of the number of times I've seen the traffic police hassle the fancy numberplate crowd. I'd rather not have my ride interrupted.

I like to give the bike an oil change within the first 200km of running to rinse out any metal shavings that the engine components learning to live with each other tends to produce. After that it's back to the service schedule as in the user's manual. And please don't even start about what oil I use. I use what comes manufacturer recommended. Brand and weight, both. It's never caused a worry and most people who claim to have used the latest and greatest oils and go on and on about its benefits are usually making the conclusions fit their lube bill and not the other way around. Unless you're racing or planning to keep the bike around for a million years, sticking to the manufacturer's recommendations is the most cost-effecive way to keep the bike lubed and running.

I'm surprised most people don't do this. I usually have the PDI technician come with tools and spend twenty minutes getting the clutch lever (angle and friction point), brake lever (angle), gear lever (angle) and rear brake pedal (angle) adjusted so that it fits my riding position. Manufacturer's typically set the bike up for the average height and weight of the average rider and I fit none of those ballparks. I will usually leave the preload setup alone until I'm used to the motorcycle, but whatever else can be adjusted usually is. I like to have the clutch and front brake levers angled so my finger fall on them naturally at the same angle as the rest of the wrist. The gear and rear brake levers, usually have to be lowered for me because I ride canted forward and I adjust the gear lever by the height of the top of the shift rather than the resting position - riding in race boots makes the upward movement quite stiff. I'll usually not rotate the handlebar, but feel free to explore the adjustment available to see if it fits you better. On the Dukes, I go from the KTM showroom to my friend at jcMoto who will usually have a set of R15 heelplates waiting. I tend use a lot of heel pressure to hold the motorcycle and it's just about the first thing added to the bike. Obviously, other bikes that have decent heelplates like the CBR250R, for instance, don't need this. 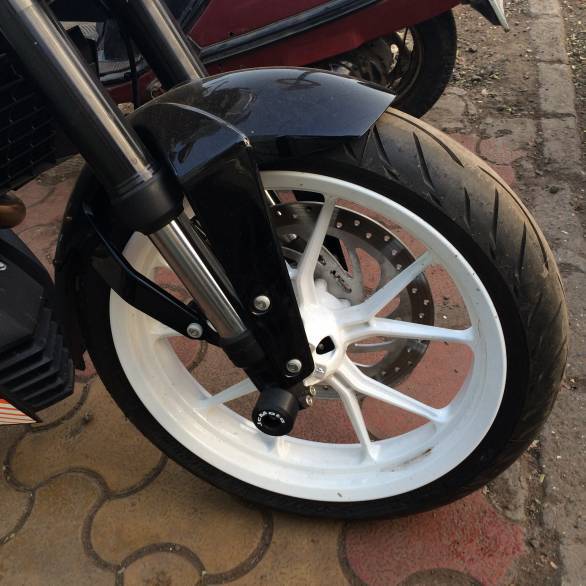 I'm pretty paranoid that people won't see me in the night and run over my pride and joy. My solution is to liberally use reflectives. There is a trick to this. Use white in the front, red at the back and yellow or orange at the sides - this is our natural association with these colours and in the dark, it might help a driver understand whether you're coming at him, going away from him or crossing his path. Used carefully, you can have the motorcycle look as close to stock as you like but light up like a christmas tree in the night. 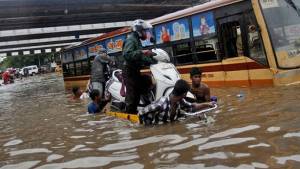 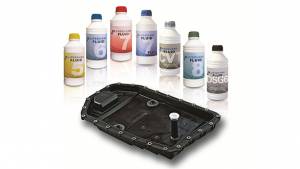 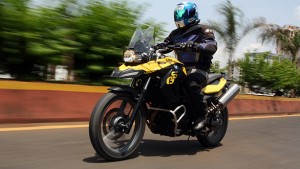 What features should my motorcycle pants...
Advertisement