Driving on a 'Wildlife Safari'

We at OVERDRIVE celebrate all things automotive and while we primarily focus on cars and bikes, we also cheer good driving and riding. Normally good driving in our country is associated with those who scorch the race circuits or dirt tracks in rally's and raids. But there are very few who appreciate and realize that some very special skills are required to drive tourists on a 'Wildlife Safari'.

Yes, correct driving in our national parks and tiger reserves is not as easy as it may appear. In earlier days when 'Wildlife Tourism' was limited to hardcore enthusiasts, I had my own heavily modified Maruti Gypsy in which I visited protected areas all over our country. On several of these 'Wild Getaways' I was lucky to meet people who taught me a lot about driving in our jungles. For starters it's extremely important you appreciate nature and drive slowly and smoothly, to ensure both you and your passengers enjoy the 'Wildlife Safari'. To see the wild animals that are born with natural camouflage and inherent stealth, you need very sharp eyesight. You also have to move slowly, to allow your eyes that much more time to focus and see them. 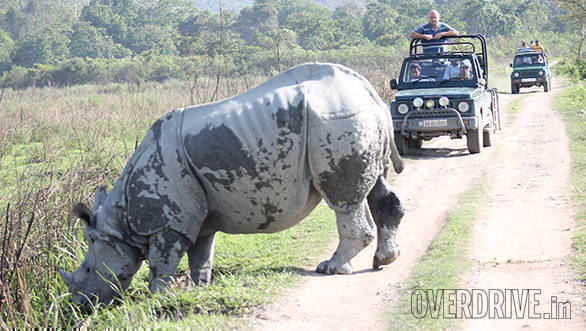 Always keep safe distance from animals. A rhino could charge your vehicle and easily cause serious damage.

Almost all roads inside our protected areas are dirt tracks, because any kind of construction can be detrimental to both the jungle and its wild residents. Given this, when you are behind the wheel you need to keep a lookout for any obstacles, undulations or stones and rocks that may hit the undercarriage and damage the engine oil sump or any other such vital component. Damage can also occur due to exposed roots or tree stumps. While being alert for what is on the road, you also need to keep an eye on what is above, because you often have low hanging branches or fruit that can break the windscreen and dent the bodywork. In case it is an open top vehicle, like most wildlife safari vehicles in India are, the driver also needs to warn in advance passengers who may be sticking their heads or hands out. In the forest, the driver has to be careful not to disturb any hive of bees, or brush against a branch on which lizards, spiders, snakes, etc, are resting or nesting. You may not believe it, but once I had a snake fall on my Gypsy. Fortunately it fell on the bonnet and casually slithered down without even giving me a look. 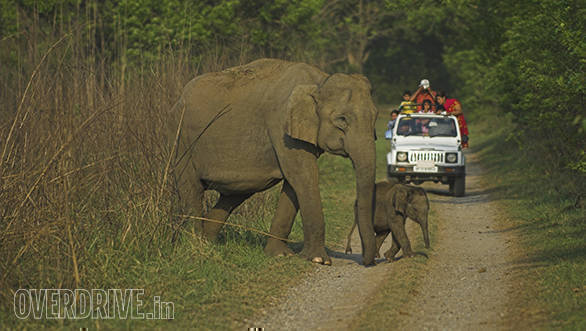 Elephants are fiercely protective about their calves and can be very dangerous.

There is a lot more to watch out for, with wild elephants being the biggest hazards. If the driver blocks their path, or suddenly startles them, they are likely to charge. In case there is a calf, you better stay away from its mother and matriarchal head of the family, as they can be very protective and prone to attack. Lone bull elephants or those in musth (a periodic condition characterized by rise in reproductive hormones resulting in highly aggressive behaviour), are the biggest threat and one should avoid crossing their paths at all costs.

The gaur or Indian bison is also very big and strong and can be hostile if cornered. In fact there are some incredible videos online of gaurs attacking, when the driver foolishly gets too close to them. Actually it's extremely unwise to block the path of any wild animal and you should always keep a safe distance because if they sense danger, they attack. Be it a tiger or wolf, leopard or jackal, wild boar or deer, porcupine or peacock, if you make them fearful, they will come at you.

The gaur or Indian bison is a very strong animal and it always has right of way.

But follow the simple rules of the jungle and you will be richly rewarded, because no animal is a natural enemy of man. Many of us like to capture the magical moments with animals too. However getting a nice photograph is not easy. The driver needs to approach any animal slowly and smoothly to prevent it from fleeing into the forest cover. No sudden acceleration or braking and no unnecessary sounds like the squealing of brakes or crunching of dry leaves or twigs under the wheels. Then there are other aspects like the direction of light, the angle of approach to the animal, etc. What is also important is that not only the driver, but the passengers also have a view of the wildlife. The driver may stop where he can see the animal, but it's quite likely that the view of the others is blocked by a bush, branch or tree.

Sadly, though India has seen a remarkable growth in 'Wildlife Tourism' in the last decade or so, the standard of driving in our forests has fallen drastically. Simply because, most drivers are inexperienced and insensitive to the requirements of their guests. Nowadays nearly all drivers rush around and in their haste they miss showing their guests quite a lot of the wildlife. They also have no idea of smooth starts or stops and jerk free driving and the guests get bounced around a lot. And in case you are a dedicated sort of photographer, you will be disappointed by the way the drivers halt and position the vehicle because all they are interested in is seeing the animal themselves and shooting it on their own phones. What is even worse for enthusiasts like me is that the authorities no longer allow us take our own vehicles into most tiger reserves, and we too have now become dependent on the 'taxi wallah type of wildlife safari driver'.