Yes, you, Mr Cyclist. The one in the fancy aerodynamic helmet, and clothes so tight that they've probably choked the blood flow to your brain. Yes, you, the one in pseudo-rubber tights who probably wanted to be a deep sea diver, but ran short of money and so the rubber suit is a lot shorter than prescribed. You, the one riding that thin-as-a-twig bicycle but riding it as if you had rocket boosters stuck to your behind. 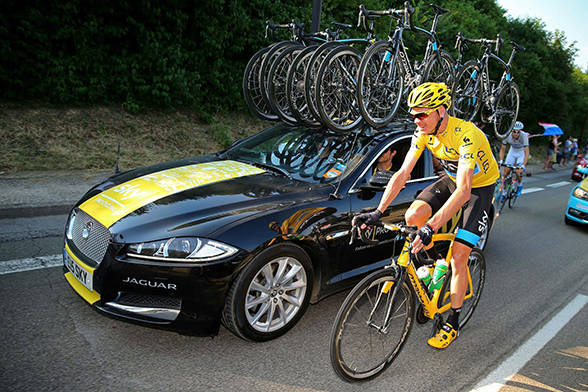 What's with the manic riding; the senseless filtering through traffic; the dangerous and uncouth overtaking; the mindless swerving across lanes as if the highway was a cycling track with no one on it but you? Also, the cutting across cars and bikes, as if they were stationary or incapable of direction or speed changes, is all a death wish and nothing more.

It might be peak hour evening traffic in Mumbai on a weekday and the cars might only be crawling at 18kmph, but you clearly underestimate the danger they pose. And because you seem so naive, let me tell you what you are dealing with here.

It's dark. You have no lights whatsoever on your pedaller. And though you are big, your black rubber suit and wire like dimensions of your bicycle make it impossible to spot you in the rear view mirror. You also underestimate the reaction time of the tired mind piloting the car  it spots obstacles late and reacts to it with utmost panic. Everything from hard braking to sudden swerving is a product of the above stated panic. And given your 50kmph speed and your bicycle's incompetent brakes, any of the above maneuvers will kill you, for sure.

Now I understand that smug face; you think that cycling will keep you fit and you also have the greenest credential on the road, and are therefore better than the other road users. But then we all know what the truth is  you are a miser. You don't want to spend money either at the gym or on commuting. Because if it weren't for these reasons, you'd simply ride the bicycle for kilometres on end, early in the morning, around the especially prepared cycle tracks near your house and be done with it. With no traffic, no heat and no obstacles, not only will that be safe, it would better serve your objective of exercising as well.

Let me also introduce you to Mr A-star at this time.

Yes you, the one making all that noise as if you were going at million kilometres an hour but are still struggling to overtake that Fiat driven by the old uncle. You, driving that tiny hatch with the fancy black paint job, large bling wheels and fat unidirectional tyres.

First up, I hope you realise these modifications do little to improve your car's dynamics. These won't help you go any faster, or help you stop sooner. These won't even help the car change direction with any more alacrity than it already does. More importantly, these do nothing to improve your driving skill. And why is your seat reclined all the way back? And what's the idea behind throwing away your headrests?

Just in case you aren't aware, headrest can save you from a severe injury. Ever heard of whiplash? And you don't have to be doing 100kmph to be hurt badly. All it takes is someone rear-ending you and without the headrest a severe neck injury is simply waiting to happen. As for the seat back thrown almost as far down as it will go; no it doesn't make you look cool. Silly yes, clown-like even, but certainly not cool. It also spoils your visibility and gives you very little control of the steering; felt most when you have to steer quickly away from an obstacle.

And given the way you are driving  those close shaves with the autoriskshaws, motorcyclists and the blue Jazz (which I am driving, by the way)  you sir, are a disaster waiting to happen. It's fine to drive briskly, and it's alright to overtake as well, but to cut people so close wherein they have to brake and swerve, is not a very good idea. I know you are young, but that doesn't give you the license to be stupid.

Of course I am thankful that you did not happen to take anyone out (at least not in the time I had you in my sights), but I am happier about the fact that Mr Cyclist wasn't on the same patch of road as you, Mr A-Star. Because if that were the case, I am sure, we would have heard sirens.

So, here's my request to you both, and to all those who are, and those who aspire to be, as foolhardy as these two gentleman  stay off the road. If you want to cycle, stick to a track. And if you want to drive a loud and racy looking car quickly, go enter yourself in the Super Saloon races... at a race track.

Update: Comments are now closed. You can read the author's response below. If you can't find it, here is the link.