Crash of the titans

I see my left leg trapped between the sidewalk edge and the motorcycle. "Oh f**k. Not good. This is not good." I remember thinking. We're not going fast but there's not much I can do as I get dragged along. Effectively, just skidding helplessly along on paver tiles. 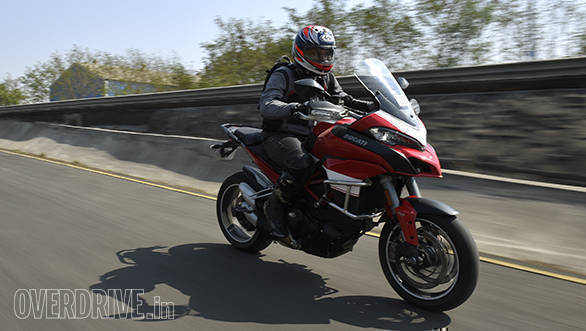 Then the bike releases me and I come to a stop. I wait for the pain and it slowly comes. Have I broken something? The thought crosses my mind just before I recall once more what happened.

I remember I rose up out of the seat for a bump, and in that moment the WagonR on my right jinked left to avoid a pothole. He hit my handlebar and turned my front wheel into the sidewalk. I remember the Ducati going over. And then I remember seeing my leg trapped, "Not good. This is not good..."

The thing about having a few crashes in your riding career is that the brain stops blanking out when it happens. And you can clearly recall a whole bunch of memories and sensations. I remember nothing of my first crash on my KB125. But I remember this one clearly. It's not perfect though. In this instance, I've no audio track for the visuals.

No grinding noises, no engine note, nothing.

I do remember that when I stopped moving, I was breathing hard but my brain was calm. I had had a crash and now I needed to do a damage assessment.

I lifted myself up on the right leg - which felt good and hobbled around to the front of the Ducati. I sat on the sidewalk and turned off the ignition on the bike. The engine had cut out but the lights were on. Seated, out of traffic and next to the bike. Time for a thorough self-evaluation.

A small knoll of wide-eyes stare down at me. I'm okay, I say before dropping the riding pants to inspect my left leg which is throbbing insistently now. After the fifth or seventh "I am okay," I decide to take charge.

"Will the two of you please pick up the bike and put it on the side stand? The rest of you, thank you, I'll be fine. Please carry on and thanks for stopping to help."

People start to drive and ride off, and Feroci is righted and stood on its side stand. Shit. One of my new lights is dangling by the power wire, its mount snapped. On day one. Expletive. Then I realise that I've been standing in my underwear and ordering people around. No one has asked me a question back. Interesting. Obedience strategy files have a new entry.

I go back to my leg. Knee is swollen, calf muscle hurts and inside the boot, the ankle feels alive as well. The heavy scrapes on the front of the boot, one broken buckle and the destroyed knee area of the pants say the battle was hot and happening.

Then again, nothing else is aching or sore, and I did manage to hobble using both feet to the side of the road as well. No chills, no profuse sweating either - I don't think I've broken anything. All the symptoms of a bone breaking haven't shown up. Good.

Then I look up and realise I'm alone. I pull the pants up. Hobble to the bike's toolkit to extract one of the many zip-ties that I always add to the factory toolkit. Sit down next to the LED and I zip tie it to the mangled crash bar so the electricals don't break. Hmm, I'll have to order a new mount. And then I notice that the gear lever is bent all the way back. Shit. Ignition on and the bike is in first gear and the Ducati dash shows no warnings. I'll get home, for sure then.

Two more motorcyclists stop to help, and I convince them to help me hop on to the bike and take its weight on my good leg. Feroci starts with the usual growl and apart from the fact that we're in first gear, we get home without undue drama and some pain.

By evening, X-rays say nothing is broken. Doctor says soft tissue injury - these take months to heal fully - but I was lucky I was wearing gear. Doc says legs trapped on the sidewalk etc. usually arrive at the hospital as snapped shins, mostly with the bone sticking out. Cue infections and surgery. I got lucky. Ligaments in my knee disagree but they've always been a pain in the, well, knee.

Then I run the crash over in my mind. I made a riding mistake or two. I wasn't a hundred per cent focussed today because I was to leave for Italy in the night to ride the 2017 Aprilia Tuono. I wasn't speeding but maybe I misjudged the size of the gap between the WagonR and me.

The Uber/Ola driver should have stopped to help but it doesn't matter. I'd rather look at stuff I can improve or fix, and another human being isn't on that list. What matters is that I got away with (relatively) minor injuries, and Feroci's damage is all superficial except for the gear lever. But what did I learn from this?

First, when you've been crash-free for a while, you get cocky. If you don't fix it, a crash will. The former is less painful than the latter. I'm not a fan of all-defensive riding in our conditions. But ride cautiously - the riders or drivers ahead, behind and around you are most likely inattentive idiots. You're on your own and no help is coming.

Second, ride a lot because it's practice. Since riding isn't instinctive to human beings, you have no choice but to pay attention to the skills and practice it.

Finally, and most importantly, don't save your gear for later. Don't be the blooming idiot who decided to wear his helmet, shorts and flip-flops because he was only headed to the grocery store.
Protect your body. It's hard to ride without it. And it's the only one you get. 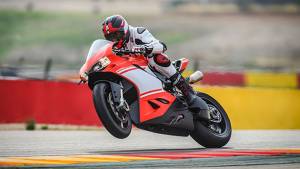