Bikes are for riding

If you're young and into motorcycles, you probably live on a forum or two. Or a dozen. And Facebook and various other online worlds. I lived in them too, ages ago. Back in the day when I was an IT guy with software in my fingers and motorcycles in my head, I found great solace in the forums where I met like-minded people.

But something has changed. Many people I meet now are netizens who're into bikes. But a surprisingly small number of them seem to have a mind of their own. What they say is what they believe based on what they've read on forums/FB/online. And because it was in the browser, it must be true. And by extension, inviolate. It's like trying to have a conversation with 10,000 unknown, unseen people at the same time. It goes nowhere.

For example, they'll tell you with great belief and vehemence that some new bike that just came out is a pile of stinking metal that deserves only a flush down the nearest toilet. Have you been out riding it? No, it's crap. How do you know? I read it. Did you read a road test? No someone I follow said so. Did this person ride the bike? Dude, that was four days ago, who can remember.

I know I'm going to get crucified in a million forums and groups at this point. But hear me out. This isn't about how bad the net is for you. The Internet is terrific. I know riders who have found resolution to problems that were vexing manufacturers and riders alike. The accumulated knowledge on a forum can be amazing and unrivalled. I also know people who've gotten parts, help, advice, places to stay and more off the net. I know it can be a generous place where goodwill, grace and warmth are the flavour of every single day.

But the problem lies with a number of the new generation of enthusiasts. They don't lack passion, but do spend an incredible amount of time buried in the bits and bytes. They'll buy expensive smartphones but not cheap bikes. These kids seem to not notice entirely that bikes are made of iron, steel, rubber and magic, not some senior member's opinion. That bikes are real things that operate in the real world. That bikes evoke feelings, sensations and emotions. Not likes, replies and reps. 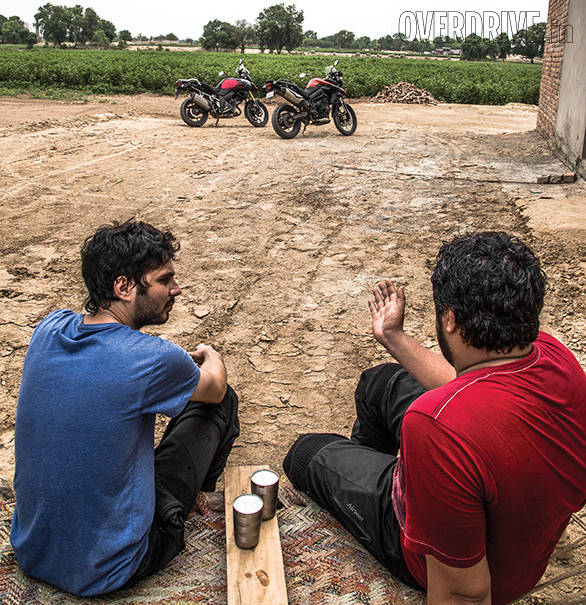 Perhaps I'm just a prickly old man who is ignorant of some arcane fact that 90 per cent of forum members, friends and followers are just not old enough to receive a licence yet. The web world stokes their passions and keeps them going until they can legally take to the roads. If true, that would be one more in the list of things the Internet is good for.
But this is about you and what you do online. Help if you can, participate actively and countenance a difference of opinion without flaming everyone in sight. But always, unfailingly, make up your own mind. Cherish the sensations you feel and stand by your opinions. No two of us are identical and motorcycles mean different things to all of us. You may not have access to the incredible universe of motorcycles at the same scale as us journalists. But that doesn't make your opinion less important or less credible.

Passion is worth pursuing. Most good things need effort and perseverance. What you're passionate about even more so.
Stoke your passion for motorcycles and not just online. If they make you all tingly, don't forget that bikes are about riding. It all flows from the ride, not the other way around.

I love to talk bikes in the flesh and online. Sometimes it feels like it is all I do. But when I meet a 'net-derived opinion spreader' or an NDOS, my eyes glaze over. When Valentino Rossi tells me about bikes, I listen intently because he isn't reporting an event he saw. He's telling me what he felt. It's the same for Joshua Crasto of JCMoto/Garage 52, and for any of the many motorcycle-riding journalists I meet in the course of my work. I want to know what they think and then debate stuff I do not agree with. And learn new things.

But NDOS' cannot do this. They spout a clear line of opinion from which they cannot waver because it isn't their opinion. It's the only argument they have and on either side lies the dark vacuum of not knowing anything else. A dark silence reinforced by the million voices that created that opinion. When I say that they're in error because I rode that bike to the limit and that's not what it felt like, the conversation ends abruptly. Because NDOS' don't know how to deal with a variance in opinion. The online community isn't there to whisper the next steps into their ears.

We are all slaves to our passions. I am. Every motorcyclist on the Internet is as well - why else would they spend hours upon hours in there of their own free will? But discussions and conversations need honest, divergent opinion to become vibrant and rich. Not from some specific people or celebrities or other pedestalised person. From you. The best forums have no dearth of opinions and they respect and value that diversity. As a regular, you should make and offer your own opinions, not spread someone else's.

Ride the bikes. Don't just talk. Your passion is not for the likes, the reps and how social you're getting. It's about the ride and how far you've come.