Recently I read a report that four persons were killed and six grievously injured in an accident on the Yamuna Expressway that connects Delhi and Agra. Such reports now are almost a daily affair with accidents and deaths being reported from all over the country. But what was different about this report, is that it said the accident was caused by a herd of Nilgai or Blue Bull! Apparently a herd of Nilgai which is the largest Asian antelope, suddenly jumped in front of the vehicle and the driver while trying to avoid hitting them, crashed into the divider at high speed and the vehicle rolled over.

The Yamuna Expressway cuts through very fertile farming land, just as so many of our other highways do. And the fact is that in most farmlands of India, you find the Nilgai. Over the years their population has grown substantially due to the ban on hunting them. In the last couple of years some states have lifted this ban and declared Nilgai and Wild Boar as pests. But we are still very far from keeping their population in check. As a result, they not only raid fields and damage crops, but also cause road accidents and deaths.

So what is the solution? Very honestly not much can be done until the Nilgai population is controlled. Yes we can ask drivers to slow down and drive carefully, but that hardly happens in our country. The moment most people get behind the wheel, they throw all caution to the wind and drive like maniacs. Interestingly, the Nilgai is one animal, which is in the habit of suddenly running across the road. Unlike several other animals it does not walk onto the road, but leaps onto it and then tries to sprint across regardless of vehicles. Given the fact that Nilgais are very fast and agile they make their way across quite a lot of the time. It's when the driver is going so fast that he can't slow down to let them cross, that disaster strikes. And because the Nilgai is a big and strong animal, it can cause huge damage to a vehicle and its occupants. In states like Rajasthan, where Nilgais are endemic, most locals have learnt to drive defensively and avoid collisions with this big antelope. But outsiders or visitors have no clue of how to drive in such situations. Ask most residents of cities like Mumbai, and they won't even know what a Nilgai is! 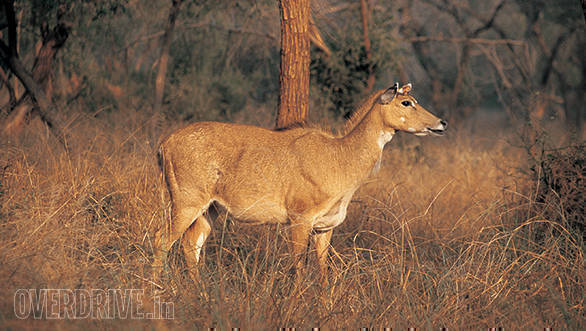 Another report I came across was equally, if not more disturbing. Recent findings show that the number of accidents and road deaths in our country due to people being distracted thanks to their mobile phones, have increased substantially. Be it drivers, riders, pedestrians, these days, it seems everyone is constantly on the phone and as their attention is not on what is happening around them, fatal accidents are occurring more often than before.

An American Automobile Association (AAA) study also shows that nowadays drivers are more distracted in their vehicles than ever before. Manufacturers, including the ones who make and sell cars in India, are in a race to offer more features and better infotainment in their vehicles. Due to this cars now have lots of more buttons, things like touch screens, voice commands, GPS navigation systems in which you can program your destination or route, and of course Bluetooth, etc. All of these features have resulted in drivers taking their eyes off the road for longer and also their hands of the steering wheel for a longer duration. These days there is a lot more for a driver to do in a modern car and this leads to distractions which in turn are the cause of accidents. The AAA found that programming a GPS navigation system to find a route to your destination was the most distracting activity, taking almost 40 seconds for an average American driver! These 40 seconds with your eyes off the road and hands off the wheel, are critically dangerous and can lead to serious accidents and fatalities.

If these are the findings in one of the world's most advanced countries, obviously nations like India are no different. With the arrival of Uber and Ola and fleet taxis, most if not all of these drivers, use their smart phone GPS systems to navigate and find their destination. Look around and you will see thousands of these cabs with smartphones mounted on a stand in front of the driver. These drivers also drive long hours and are usually tired and easily distracted. All ingredients for more accidents and road fatalities. We are not the best when it comes to accumulation and analysis of data. But I am sure if a serious and credible study was done, it would show that people using or looking at their smartphones while driving, are having more and more accidents in our country.

Does this mean we should discard new technology? Obviously not. Instead what we need to do is use it sensibly. Stop whenever you want to program anything on the GPS. Stop every time you need to touch a button or screen and select something. Stop every time you need to make or take a call. Yes, stopping and then doing things can save lives. But will this happen? You know the answer as well as I do, because 'Oh Darling Yeh Hai India'.