I am a little miffed as you can tell from the headline. Because my concern for a(ll) rider(s), and my understanding that we all have our own risk appetites are at odds right now.

This morning, on the way to work, I took an Ola after Uber decided that a cab three minutes away was the same as an actual cab 25 minutes away. At one and a half times the fare. I have a strong urge to punch somebody. No, today was not a Monday. 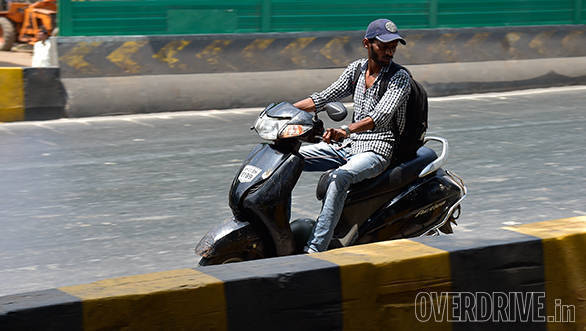 Photograph for representation only. This chap isn't the guy from this column - you can surmise this because he isn't looking where he's going.

Looking out from the back seat, I saw a TVS Ntorq 125 join the road I was on. It appeared from under a flyover and merged neatly into late morning traffic. With my eagle vision, I spotted that the number plate was only a few digits off our long-term test bike and moments later, an expletive was issued into the world. A rather strong one. For I knew who the gentleman was.

This person rides a motorcycle for one of India's leading publications. Tests them, and writes stories about them. The rider is, on the face of it, knowledgeable enough to understand the risk of wearing protective gear when out riding. And the consequences of not wearing it.

Because, said chap wasn't wearing anything but a helmet. No, no, this person was very much clothed but not for riding, you filthy brain! A nondescript brown tee, denims, sneakers and a sling bag. All dressed up for a casual evening in town then. But not a bike.

This surprises me. Considerably. And saddens me. A fair bit too.

See, I have no one above me in OVERDRIVE who can tell me what to wear on my commute daily. Er, thank god! But I studiously and unerringly wear all my gear. My friends will snigger. They think I sleep in my riding gear too, lest the ceiling fan fall on me or something. I don't blame them. D30 armour in my Cordura and Gore-Tex 'jammies, the joke goes.

I'm not superior to the scooter rider we're discussing. But I understood, natively, that I get only one head for life. So the helmet was an automatic necessity. Scars on both elbows clearly said that the jacket is essential. Road rash on my palms and having family members brush my teeth led rapidly to motorcycle gloves. I've light damage to almost every ligament in my knees from the handful of crashes I had before motorcycle pants came about. And by that point, I thought, the boots would complete the set. And they did.

Over the last 15 years, I've gone for haircuts in the 'hood, and for thousand kilometre days, prepared for the same thing. To have something to put between me and the road when I crash.

So the sight of an apparently learned colleague riding without any surprised me immensely. On the one hand, it makes me immensely proud that Abhay, Rishabh, Rohit, Anis, Akshay and Aditya all wear their gear to work daily. I've never told them its mandatory and I've never needed to either. Some of them will wear jeans but not motorcycle pants to work and I think that's okay. Their ligaments are younger than mine and more importantly, they're their ligaments, not mine.

But I cannot. It isn't none of the gear some of the time. That's not what we're trying to get motorcyclists to do, right?

But this isn't about this journalist alone. It's about the simple decision to not ride with gear. This rider is fully clad when published, so an actual lack of gear isn't the problem. I wonder how you reach the conclusion that you will not even need the gloves today. What thought process tells you that being road-legal is enough and being prepared is for another day? I know your name, dude bro. It isn't Nostradamus. And he didn't make all that much sense either, heh heh.

I asked someone at his publication, having whatsapped him a picture of our friend. He shrugged. "I can enforce all the gear for the shoots. But besides that, it's their lookout..."

He's right. This upsets me, but protecting yourself has to be your decision. You have to understand that wearing the gear allows a greater shot at that long, scenic bucket list ride. It's essential to your ability to continue making the memories and experiencing the sensations that only motorcycles can deliver.

Or you could be defeated by five extra drops of sweat.

I know you're reading this my friend and you know who you are. I have only a suggestion.

Write what you believe. Do for yourself, what you write for others. We are professionals and our ride is a long, hard one. I hope to ride with you, and to see you on the other side. More importantly, you love the motorcycles at least as much as I do. And I don't want you to be left out by accident.