A Bentley Speed Six, a Hudson Greater Eight, and the art of dreaming

Back in 2014, on my very first visit to Berlin, I took a little trip to the Classic Remise, and spent more than just a couple of hours gawking, gawping and staring. My jaw hit the ground so many times, I was convinced that my mandible would require medical attention to deal with the multiple fractures that I was sure to have suffered as a result. And I seemed to need to pause every now and again, not to rest my feet, but to rest my eyes. And my heart. Because the Classic Remise, and its collection of very fine vintage cars, was causing that very organ considerable stress. The acceptable lub-dub noise that I'm told a healthy human heart ought to be making, had been replaced by sounds that ought only come from a jackhammer.
Five years later, just two days before writing this column, I headed to the Classic Remise once again, on what I decided to call a restorative Saturday for the soul. And I found that nothing had changed, and I mean that in the nicest way possible. The effects that the place had on my head and heart were much the same as it had been when I first visited it.

In fact, so bountiful are the treasures of the Classic Remise, that this time around, I found myself walking right past a Lancia Delta Integrale, a Ferrari 512 BB, and a Mercedes 300SL. Because there was something else that had attracted my attention. Parked there, looking very imposing and stately, was a Bentley Speed Six from 1929. Yes, one of those Speed Sixes. The ones that raced at Le Mans ninety years ago now. The ones that went roaring down Mulsanne, their 6.5-litre 6-cylinder engines spitting and fuming and shaking and shuddering, as one of those brave Bentley Boys kept his foot planted firmly on the accelerator. 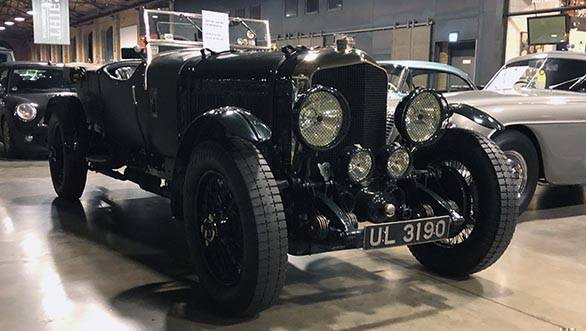 A 1929 Bentley Speed Six at the Classic Remise in Berlin

Standing in front of that Bentley seemed slightly disrespectful. After all, if there was ever a grand daddy of racecars, that, right there, was it. So I crouched down a little, hoping that it would pass for a discreet genuflection of sorts. One that the people around me might not pick up on, but that racecar - he would know. And I assure you, the Bentley Speed Six is most definitely a he. If you look it straight in the headlights, you feel like all that it's missing is a mustache. In fact, the Speed Six is the very embodiment of a fine racing gent himself. It honestly looked as though, after a tough weekend of racing at Le Mans, he'd driven himself back home, put on some warm slippers and relaxed in front of the fireplace, while smoking a pipe and drinking some Scotch. That right there was a car full of personality. 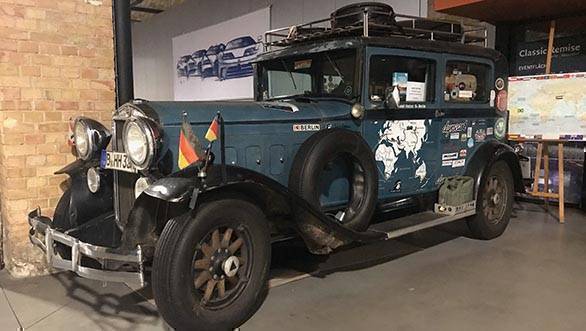 Heidi Hetzer's Hudson Greater Eight from 1930, that she nicknamed Hudo, and travelled the world in

But there was another car (perhaps not as stately and imposing, but just as full of character) that caught my attention in another part of that most beautiful combination of museum and car workshop. Parked some way away from the all of the other more exotic machines, tucked away in a corner, was a Hudson Greater Eight from 1930. It had on its side, a map of the world. And traced on this map was a route that the car had travelled. It had started off in Berlin in July 2014, travelled through Eastern Europe, made its way to Tehran, crossed over into China, and then headed off towards Australia and New Zealand. From there, it moved by ship to North America where the journey was continued on land, through the USA and Canada. Then rather a lot of dashing about South America, followed by some travel across Africa, before the car ultimately arrived in Europe, and reached Berlin on the 12th of March 2017. A full two-and-a-half years after having first set out.

In case I've given you the impression that the car did this all on its own, I must quickly point out that was not the case. Behind the wheel of this Hudson Greater Eight was a lady - the late Heidi Hetzer, who, at the age of 77 decided that she needed a little bit of freedom, and set out to get exactly that. Now, Hetzer was no stranger to spirited driving. She'd, in the past, participated in the Mille Miglia, Monte Carlo Rally, and the Panama-Alaska Rally, to name just three in a rather long list of events she'd competed in. She'd also managed a third-place finish at the Carrera Panamericana rally in Mexico in 1989. Hetzer was certainly an accomplished driver. But the fact that she set off, all on her own to do a spot of continent crossing at the age at which she did, speaks volumes about her character, resolve, and determination. She even ended up losing a finger in Hudo's (which is what she affectionately called that faithful steed of hers) engine bay, when trying to fix something under the hood halfway through her trip. It didn't deter her one bit, and she didn't reconsider her journey. She carried right on. 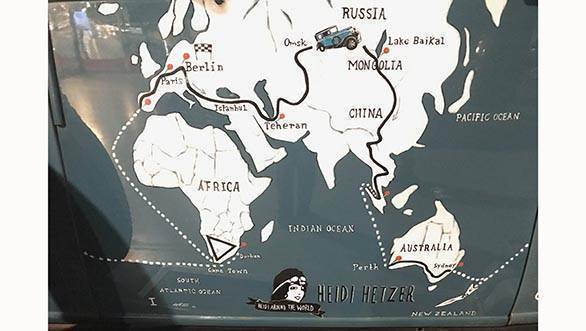 The route Hetzer followed on her journey through across the world

Given that it's December already, the time at which one tends to take stock of the year gone by, and the time at which one wonders what life has in store for one in the year that is yet to come, I find myself contemplating what the Bentley Boys did, and what Heidi Hetzer did. Both parties decided to go out into the world and attempt something, hurdles, and obstacles, be damned. And they decided to give it a go, even though they didn't have complete control over the outcome. A little like life itself. Strewn with thorns and brambles, unpredictable, but worth leaning into and experiencing with gusto.

Which is why, as the year comes to a close, and as you contemplate your journey thus far, and the endless possibilities that await you, I wish you the fearlessness and strength of the Bentley Boys, and the spirit of adventure, determination and resolve of Ms Hetzer. And I urge you to get going on those dreams you've held onto for so long now. Get going, and I assure you, the rest will fall into place.