The "KC500 with Montra" was a fantastic experience and one that I have to say I'm very proud of. It was my first ever multi-day cycling tour and leading the organising team as well as riding was a bit of a challenge.

Before I go into the tour itself, I feel like I ought to give you guys some background to the KC500. The reason we run the KC500 is (1) To raise funds for my family-run trust, the Vishnu Devananda Charitable Trust where we educate underprivileged children, as well as for a school in the Pallikaranai district of Chennai supported by the Madras Round Table number 42; (2) To promote the idea of cycling as a form of social exercise as it's done in other parts of the world. TI cycles and I have been working together for a number of years now going from city to city promoting this with a pretty good rate of success; (3) Riding up the hills to Kodaikanal was always on my personal bucket list and I thought it would be great fitness training ahead of the racing season.

To help run the event, I enlisted the Tamil Nadu Cycling Club ( TCC ) who are big organisers of cycling tours in the state and their team did a superb job of planning the route, putting pitstops in place, organising mechanics, masseurs and physios, getting energy packs for the riders, getting the hotels organised and generally looking after us. For the route itself, I had two requirements  (a) it needed to finish in Kodaikanal to satisfy my bucket list ; and (b) it needed to start in Chennai. The TCC team advised that we go away from the highways and instead travel through the towns of Mahabalipuram, Pondicherry, Cuddalore, Chidambaram, Tanjore, Karaikkudi, Batlagundu and finally Kodai which was safer and a bit more scenic for the riders. 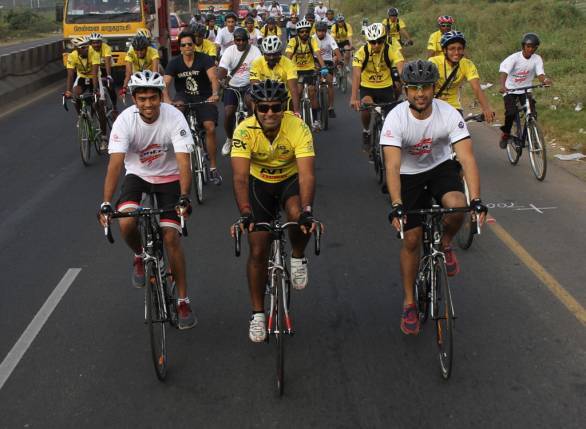 The ride started off in Chennai on the 19th of January, my 30th birthday. To get the larger community involved and to make an impact with the media, we enlisted the Chain Reaxion Cycling club in Chennai to organise a mass start. This meant that we had over 200 cyclists, including the school children, leaving the Pallikaranai school at 8am which was fantastic. The mass start riders did a 25 km ride and at one point turned off back towards the city, while 18 of us for the main ride headed South down the coast towards Pondicherry.

The first day was planned at a reasonable distance of 140 kilometres with two pitstops along the way. Riding down the East Coast Road has been my usual training route for a few years now and certainly the ride until Mahabalipuram is one I know very well. Beyond 'Mahabs' though I have to say the views in certain areas are absolutely stunning, with the Bay of Bengal to your left and the backwaters to your right, it really makes you forget the heat and traffic as you ride along. We had left Chennai at 8:20 in the morning and my plan for the three days on the plains was to go as quickly as possible so I can get out of the sun and equally importantly, get my bum off the saddle and give it a break! The plan worked quite well and the lead group of us were in our hotel in Pondicherry soon after lunch time, while the other riders all filtered in over the next few hours.

The Monday morning start in Pondicherry was fantastic and one of the highlights for me. The local MLA had opened up a part of the promenade which is normally reserved just for walkers in the morning. He flagged us off at 7am just as the sun was rising and we rode all along the beach out of town, heading towards Tanjore. This was the longest day of the ride in terms of distance, with a mammoth 176km ahead of us. The early part of the route from Pondicherry to Cuddalore I have to say isn't the best for cyclists. The traffic is quite bad but once you pass through Chidambaram, the whole scenery changes. Lush green fields, coconut plantations, children and 'tea-kadai' owners all cheering us on, it was a fantastic few hours. Unfortunately, our lead group was so busy admiring the view that we ended up missing a turn off and did an extra 6km, not what you want on the longest day of the ride. Mind you, another group of guys took some other wrong turn and ended up doing an extra 25km which was even worse!

The TCC team had done a great job of organising snack packs with energy bars, chikki, bananas and electrolyte drinks along with some lunch for the riders at each of the pitstops. It's quite amazing how many calories you burn on a bike when you spend over 4 hours a day pedalling away. In fact, my total calorie count from the four days of the ride was 21,025 calories! It's quite amazing after a long day of riding just how much food your body craves  I was eating dinner around 8pm and then going for another little snack of fruit or cereal a couple of hours later!

On this second day, our lunch stop was at a town called Anaikarai where we rode over two bridges which are effectively above a pair of dams. It really never ceases to amaze me how many great sights we have in our country, that we really take for granted and a lunch stop in Anaikarai dam is totally recommended if you're ever in the area! This 180km ride was really hard work when compared to the ride to Pondy with fresh legs the previous day and there were plenty of tired folk when we got to Tanjore. I had planned it this way because on our third day before the climb up to Kodaikanal, I wanted to have the shortest ride of 'only' 108 kilometres ,so ultimately it worked out well although at the time it really didn't seem that way to anyone.

This third leg took us further inland from Tanjore towards the town Karaikkudi. The first 50km as we left Tanjore past the Air Force base was probably the best part of the ride on the plains. The road surface was fantastic, there was hardly any traffic and the views were amazing. Village after village went by where people were friendly and courteous, something that cyclists in cities are really not used to! We stopped for some roasted cashews at some huts along the way and spotted some great architecture and forts. Deep in Chettinad country, the lunch stop at Karaikkudi with a traditional banana-leaf "yelai sapaad" was fantastic and the riders all enjoyed a well deserved cold beer after getting out of the blazing sun. After three days and 424km of riding on the plains, we were all a little sun burnt as the group headed by bus to Madurai for the night. By this stage, my bum had also had enough and I was actually quite glad to transfer some of that pain to my legs the following day, as climbing uphill involved more standing up than on the plains!

Everyone woke up on the final day with a little extra bounce in their step with the prospect of the hills ahead of us. We stayed overnight at the JC Residency hotel in Madurai which was a real pleasant surprise for us. The hotel staff were extremely helpful and the rooms were fantastic. They even packed us a great little lunch pack of small kathi rolls that the riders could eat while still pedalling along. We all once again loaded up into the vans and headed towards Kodai Road station where we began our final day of riding, with an hour on the plains to get warmed up before the 48km climb up the hills to Kodaikanal.

There's a huge amount of technique involved with riding a bike in the most efficient way, balancing energy, power and speed. This especially comes into play on the hills where you have no real respite from the constant torture you're putting your legs through. This same pain though, is what gives any cyclist the buzz of riding and the satisfaction of fighting against that. One hugely critical thing especially on the hill is to watch the lactic acid build up in your legs. As soon as you stop to have a break the lactic acid builds up very quickly, and to break through that and get going again is very hard. Because of this, a couple of us decided beforehand that we would power through the entire 48km non-stop and just grab food to go from the pit stops.

For the first 20km of the climb I felt great. It was a fantastic feeling to pull away from the pack and really just enjoy some focused alone time, really concentrating on maintaining a good rhythm. It was a feeling quite akin to doing a night shift at Le Mans, where the darkness all through the forests makes you focus your mind into just the job at hand while you're alone out there for a few hours. Every time I turned left and looked into the plains, there was a huge sense of satisfaction to see how much altitude had been gained as I chugged along.

After the first hour and a half, I had reached the 20km mark and started to hit a wall. My legs started to feel heavy and all of a sudden the thinning air and fatigue started to have an effect. At this point I was fortunate that another one of the riders, Krishnakumar who is part of my cycling club in Chennai caught up with me. 'KK' hadn't done the previous couple days and actually joined us with "fresh legs" just for the climb up to Kodi. Having another rider on the mountains isn't as advantageous as on the plains where you can draft behind each other but having someone else also feeling the pain and powering through it, is a good motivator.

The climb up to Kodai is pretty steep with very little respite. There's a bit of a plateau around 3700 feet up before it kicks again towards the finish. As we got to the plateau and the small descents between hills, I decided to just slow the pace down and rebuild some energy while KK pushed on. Once you get to the final 10km to the town, your mind starts to play tricks on you. That final 10km seemed like a hundred to be honest, as you can start to see the town but you're not quite there yet. It didn't help that the road surface as you approach Kodai isn't great either but finally after 3 hours and 11 minutes of pain, I had reached Kodaikanal and the end of the KC500 ! I was pretty pleased with my climbing effort as I had set myself the goal of three and a half hours and also considering the next riders arrived nearly an hour later.

All in all, the KC500 was a superb experience from a charity, fitness, social and touristic stand point as well as being a real test of mental strength. Our fund raising campaign went better than we had hoped and in total we raised about Rs 15 lakh for the two charities which I thought was a great effort for a fund raising campaign done purely online and all within six weeks. I really do hope that I've given you some insight into the event and cycling on the whole and also that this encourages more of you to get on a bike and appreciate our beautiful country in a new way.