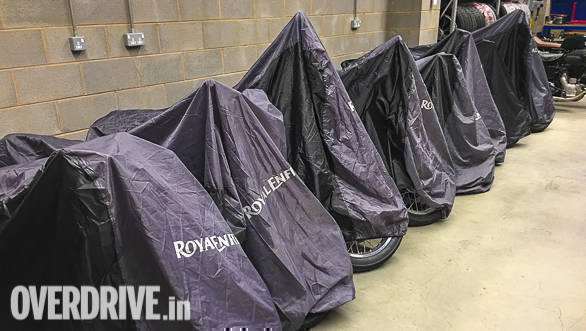 That is the new Royal Enfield 650cc parallel twin which was revealed to be producing 47PS and 53Nm at an event at the company's new Technical Center at Bruntingthorpe in the UK.

The new engine's detailed specification was not revealed today. However, we do have the final power figures. The 4-valves per cylinder SOHC fuel-injected engine will make 47PS of peak power at 7,100rpm and 52Nm at 4,000rpm. Compression in a reasonable 9.5:1. Royal Enfield re-iterated that the power output and its maximisation was not one of the goals for the engine. The exact displacement is 648cc with an oversquare configurarion. Royal Enfield says the engine needed to be fast enough to be a solid upgrade to the current produce range but not so fast that it would intimidate new riders. Inasmuch, Royal Enfield expects the new customers for the 650 twin to be a mix of current customers upgrading, brand aficionados who haven't found a bike they can buy so far (a specific example quoted was European riders who cannot sit at motorways speeds on current Enfields), new prospects as well as people who would normally have purchased something else. CEO Royal Enfield Siddhartha Lal revealed that the original engine was planned as a 600cc twin that was later 'grown' to 650cc to ensure that the new motorcycles would cross the ton 100mph, or 160kmph easily 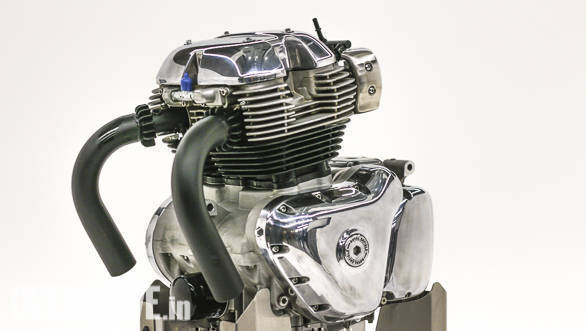 The single-piece forged crank reduces secondary vibrations and the new parallel twin also gets a balancer shaft apart from an powerful alternator for the genuine accessories that are coming.

Royal Enfield also made sure we understood that this engine is designed to appeal both to new and experienced riders and one of the ways to do that was to produce a fat and steady torque curve. 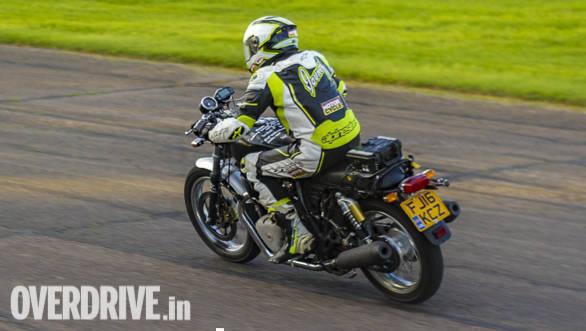 This is a prototype ridden by Royal Enfield's official test rider that did a fly-by as we were taken around the Bruntingthorpe Proving Ground, including the near 3km runway at the former USAF base. You can see the twin-shock rear suspension and the normal raised handlebars clearly apart form the test equipment mounted to the back of the bike.

Royal Enfield says it tried out three difference crank configurations at the Chennai race track before settling into the 270° crank that is the final specification. The one-piece forged crank quells secondary vibration says Royal Enfield while a balancer shaft takes care of primary vibration.

Royal Enfield says the twin cylinder configuration doesn't have the thump that Enfield's motorcycles are famous for. But Siddhartha Lal, MD & CEO said, "I wouldn't call it a thump, but I would call it a rumble." 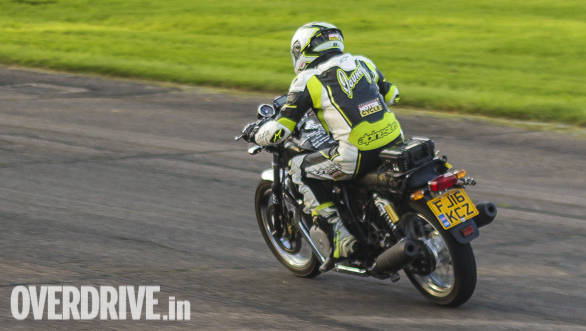 That is the new Royal Enfield 650cc parallel twin which was revealed to be producing 47PS and 53Nm at an event at the company's new Technical Center at Bruntingthorpe in the UK.

The new engine is also fully equipped in other ways. The engine cases take inspiration is visual form from the old 1948 500 Twin says product strategy and industrial design head Mark Wells. But inside is a modern air-cooled engine with an oil cooler mounted high and centre. The engine gets a six-speed gearbox as well as a slip-assist clutch to reduce lever effort.
While more details were not revealed, Royal Enfield did reveal that the motorcycle will cruise the British motorways at 70-80mph or 120-135kmph easily.

The all-new chassis and cycle parts

Royal Enfield has decided to reveal more of the details of the motorcycle only at EICMA. But we were told clearly that the chassis is all-new and in fact, Simon Warburton, head product development said, "Only a few screws, if that, are interchangeable with the old models." We had a prototype do a fast fly-by that showed a pair of gas-charged rear shock absorbers. Royal Enfield also confirmed that ABS will be on the motorcycle - it is safe to assume this means in India as well since the launch is expected for April. The other model on display, revealing on an genuine accessory front alloy wheel also showed off a single disc and telescopic forks - but that isn't new information. 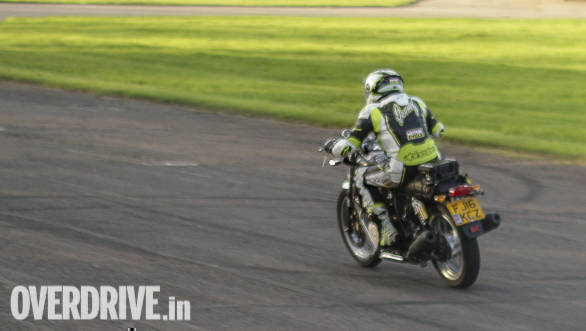 We did see a glimpse of the motorcycle but the actual reveal at EICMA, the Milan motorcycle show is expected to hold two motorcycles, set for launch in April 2018

There are two new motorcycles

While not officially confirmed, I am increasingly convinced that Royal Enfield will have twin twins on the show stands at EICMA. The prototype in the fly-by had a raised street-style handlebar but a Continental GT-style cafe racer has also been spotted testing. It is these two forms of the new platform that we should see the Milan Motorcycle Show. Naturally, this engine and version of the frame together will also underpin future motorcycles from the Chennai brand. 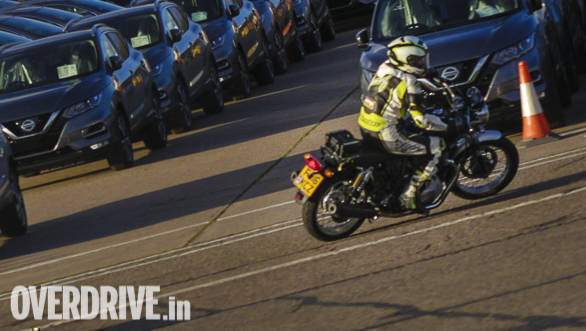 We did see a glimpse of the motorcycle but the actual reveal at EICMA, the Milan motorcycle show is expected to hold two motorcycles, set for launch in April 2018

Royal Enfield took great pains to show us a thoroughly modern development facility which the company intends to use for new product development. More importantly, while it has already been at work revamping almost all of their systems, Royal Enfield's Techinical Centre also aims to to bring in-house many of the development processes that the company currently outsources, or used to until recently. To wit, Royal Enfield says it now has full in-house engine, chassis and design lifecycle ability.

Watch for more stories from EICMA, the Milan Motorcycle Show as well as on the two new Royal Enfield twins that are expected to be revealed to the world in pre-production form around 8.30pm on Tuesday Indian Time.