Here's the press release: National Geographic Channel and Nissan will give television viewers an experience into the unchartered terrains of India through its new adventure reality show X-treme Trail. The 6 part series, premiering on November 5, for the very first time, will be telecasted simultaneously on National Geographic Channel, Fox Traveller, Star World and Channel V. National Geographic Channel, known for its unrivalled imagery and powerful storytelling will showcase the art and science of off-roading through the journey of the 8 contestants on the show. From the selection and training, to battling the rough topography of the dunes of Rajasthan, the dense jungles of Rajaji National Park to the trans-Himalayan ranges in Himachal and Ladhak, the chosen contenders will show their mettle on the road in the SUV from Nissan - The X-trail. The final winners will get a chance to pay homage to the Indian Army warrior as their final drive takes them to the highest battle field on earth, Siachen Glacier.

On the occasion of the series launch, Nissan unveiled the new X-treme Trail limited edition of Nissan X-Trail which commemorates the drivable feat achieved in India by Nissan SUVs. Priced at INR 2,278,928 LE-Grade (ex-showroom, Mumbai), the SUV has added 10 new features such as Touch Screen Navigation System, Rear Spoiler, X-treme Trail Decal, Door Visor Set etc. all adding to the comfort and ease of off-roading on Indian terrains. Commenting on the premier of X-treme Trail, Ramon Chibb, Senior Vice President - Content, National Geographic Network India said, "Nat Geo has always worked with like-minded brands on creating some of the best integrated properties in the past. Adventure and exploration is in the DNA of National Geographic Channel and through our association with Nissan for X-treme Trail, we will bring out the powerful imagery of the extreme Indian terrains through an adrenaline pumping drama. The expedition was one of its own kinds of experience which comprise the journey of more than 4,000 kms, 32 days of shoot with a crew base of more than 40 people. We are very excited about this initiative as for the very first time a reality adventure show on Nat Geo will be telecasted simultaneously on four different channels, â" Nat Geo, FOX Traveller, Star World and Channel V."

Unveiling the limited X-trail Edition to coincide with the occasion, Mr. Dinesh Jain, CEO, Hover Automotive India, Nissan's Sales & Marketing Partner in India said, "Brand Nissan is known for its product Innovations around the world. Nissan X-trail with the new 2.0L M9R fuel-efficient diesel engine combined with the most capable ALL MODE 4X4-i system makes it a unique vehicle in its class. In the X-treme Trail program, the Nissan X-trail has surpassed the expectations of all 19 amateur drivers and the two final winners who successfully drove it to one of the most difficult terrains in the world, the Siachen Glacier which also reconfirms the claims that the car is perfectly designed for city as well has off-road driving. We would like to mark this program by launching an X-treme Trail Limited Edition of Nissan X-trail which will enhance the driving experience for anyone who enjoys SUV experience. The limited edition will be on sale from the month of Nov'2012 at all Nissan 45 dealerships accorss India".

X-treme Trail will premiere on Saturday, 5th November at 8 pm on National Geographic Channel, Fox Traveller, Star World and Channel V. The series is being extensively promoted through a 360 degree marketing campaign including outdoor advertising, print and radio. Nissan & National Geographic Channel are also holding a contest wherein participants can log on to www.natgeotv.co.in/xtremetrail and submit their 'X-treme adventure' stories. The 4 best entries will win an adventure trip to Rishikesh. 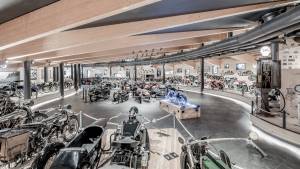 Motorcycle museum in Austria ravaged by...