New Tata Nano GenX to be unveiled in India today

Tata Motors showcased a new Nano concept at the 2014 Auto Expo. Back then, it was speculated that the car may have a new engine which could be a diesel unit. The other changes which were quite obvious included the updated styling, cabin and even the presence of an AMT. Tata Motors, after a year, is now ready to launch the updated Nano and the global unveil of the new Tata Nano Gen X is likely to happen today.

From the teaser images, it seems the new Tata Nano GenX, will have that same grinning grille that was seen in the concept. We are in fact happy to report that Tata Motors has kept the design intact. The front and rear bumpers are all new. The new Tata Nano GenX also gets an openable boot which is rumoured to have a capacity of 110 litres. We have already caught the new Nano testing several times on Indian soil. It's likely to be powered by a more powerful 800cc motor belting out close to 50PS of power, coupled with the convenience of an AMT or EasyShift, as Tata likes to call it. We have seen how the AMT works in the Tata Zest and can vouch for the convenience bit. A claimed fuel efficiency of 21.9kmpl from the Tata Nano EasyShift is being floated around. A larger 24-litre fuel tank can also be expected from this new Tata Nano. There are new colours expected to be added to the existing palette. All versions of the new Tata Nano GenX are expected to come with power steering as standard. 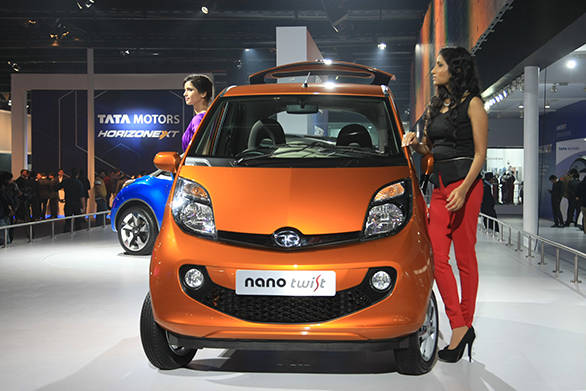 Watch this space for more developments regarding the new Tata Nano GenX. We will be driving the car on April 27, 2015.