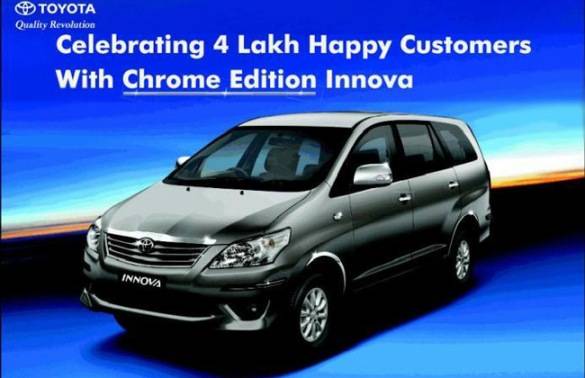 Since it hit the Indian market in 2005, the Innova has been Toyota's best-selling vehicle in the country with its sale figures crossing the 4,00,000-unit mark. Now to commemorate this milestone, the Japanese auto giant has launched a special-edition Innova Chrome.

It's essentially an add-on pack for the GX, and partly for the top-end VX variants. Customers across India can avail the pack from their local Toyota dealers for Rs 31,000. The kit is available for both petrol and diesel models in the GX while some elements can be installed in the VX.

The front grille gets chrome garnish and so do the wheel arches. The bumper protector, door handles, hatch lid, indicators, side view mirrors as well as the muffler will also get chrome finishing. There is, however, no change in the core design of the Innova.

The Innova shares the same IMV platform as its stable-mate Fortuner and comes in two engine options. The 2.5-litre D-4D turbo diesel engine is good for 102PS and 200Nm of torque. The 2-litre petrol engine churns out 132PS and 181Nm of torque. Both models have a rear-wheel drive layout and a standard 5-speed manual transmission.

One of the highest-selling MPVs in the country, the Innova comes in 7-seater and 8-seater options, with the prices starting at Rs 11.58 lakh (ex-showroom, Delhi).

Toyota launch the Fortuner Legender with...