Land Rover has launched the new Land Rover Defender in India, with prices starting from Rs 73.98 lakh for the base three-door 90 variant, going up to Rs 90.46 lakh, ex-showroom, for the Defender 110 HSE. The Defender is a ground-up new take on the 4x4 icon, which first debuted at the Frankfurt Motor Show in September 2019. This is also the first time that this model is being sold in India. The Defender 110 is on sale now with the Defender 90 set to launch in Q1 FY21. The new Defender sits on the all-new D7X platform, not shared with any other Land Rover, and styled keep many of the original's iconic design elements intact or reinterpreted. The Defender 110 4x4 is 5,018mm long, 2,105mm wide, and with the air suspension version 1,967mm tall. The wheelbase is 3,022mm. 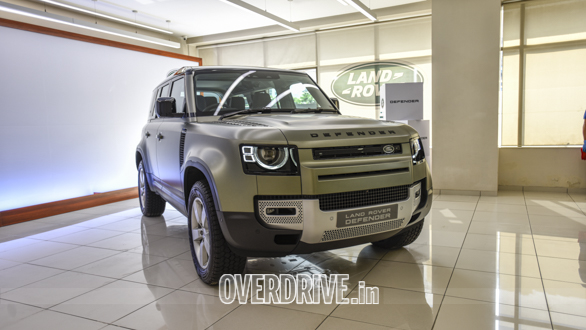 With the SWB Defender 90, the length is 4,583mm and wheelbase 2,587mm. With the coil suspension-equipped Defender 90, height is 1,969mm. The Defender's aluminium monocoque structure three times stiffer than body-on-frame cars. The live-axle suspension has also been replaced by independent ones with air suspension available on higher trims. Two wheelbase lengths are available, the three-door 90 and five-door 110. Adding off-roading capability to this is the permanent all-wheel drive, a twin-speed transfer case, centre differential and an optional active locking rear differential. Notable new off-roading tech is the debut of the fully configurable Terrain Response 2 system. Land rover's ground-view camera is also available, which show the area usually hidden by the bonnet. This new architecture gives the Defender a ground clearance of up to 291mm and approach, departure and break-over angles of 38, 28 and 40 degrees respectively for the 110 version. There's also 900mm of wading depth on offer through the new wade program in the Terrain Response 2 system.

The Defender carries over this balance of ruggedness and modernity on the inside as well. The dash has 3D elements with lost of open areas and the exposed power-coated structural elements highlighted by the cross-car beam that runs across the dash. Other unique bits are the dash-mounted gear lever and more simple placement of the centre console buttons.  Durable materials like a canvas-inspired fabric and rubberised floor mats are available. The angular theme continues in the steering wheel, instrument cluster, exposed screws as well as the new-gen 10-inch Pivi Pro infotainment system which also allows for OTA updates. Unique is the optional middle seat in the first row. This allows the 90 to be available in five or six-seat combinations and the 110 in 5+2 arrangement for India. 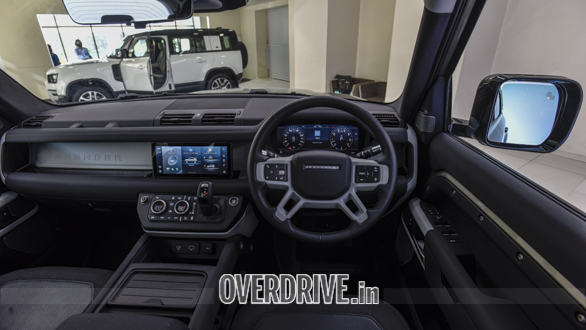 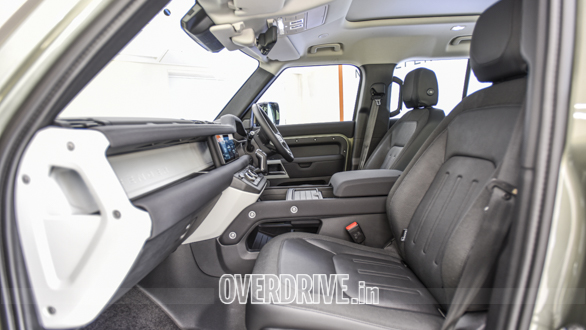 The India-spec Defender is available with a single-engine option. This is the 2.0-litre Ingenium four-cylinder petrol in its P300 guise. This version makes 300PS at 5,500rpm and 400Nm at 1,500-4,000rpm. Land Rover India has confirmed that the 3.0-litre inline-six petrol and the 3.0-litre inline-six diesel engines will join the Defender India line up in the future. Additionally, the Defender PHEV that recently launched internationally will also make its way here.