New Hyundai i20 to launch in India on November 5th

Hyundai India has announced that the all-new Hyundai i20 hatchback will be launched well in time for the festive season, specifically on November 5th 2020. Bookings for the new i20 will open on October 28th, at a price of Rs 21,000, and customers will also be able to book their cars online, with variants ranging from Magna to Asta (O). Prices for the new Hyundai i20 are expected to rise slightly over the outgoing model, which has a price range between Rs 6.56 lakh to Rs 8.32 lakh (ex-showroom) currently, considering the diesel model isn't available anymore. The diesel range was last priced between Rs 8.15 lakh and Rs 10.9 lakh (ex-showroom). 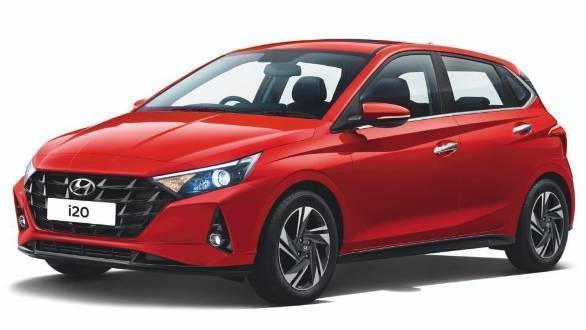 Now in its third-generation, the i20 sees a radical shift in its styling, from curves to sharp creases, and this is our first look at the India-spec Hyundai i20. Stylistically, the international model that we're familiar with and the India-spec cars seem virtually identical, from front to rear, with sharp LED projector headlights, LED DRLs, a heavily creased hood, strong character lines down the sides, and the unique tail lights with a chrome strip running between them. The new Hyundai i20 will be available in a total of eight colour options, including two dual-tone shades. The regular colours include Polar White, Typhoon Silver, Titan Grey, Fiery Red, Starry Night and Metallic Copper, with the Marina Blue shade having been dropped. The dual-tone options available are in Polar White and Fiery Red, paired with a contrast black roof.

The new-gen i20 will be offered with a choice of three engines (two petrol, one diesel), and five gearboxes, ranging from 5- to 6-speed manual, iVT (CVT), an iMT and a 7-speed DCT. The 1.2-litre naturally-aspirated petrol is likely to feature similar power outputs as its previous application in the Hyundai i20, at 83PS and 114Nm, and will be available with a 5-speed manual, or the iVT. The 1.0-litre turbo-petrol is available in its more powerful 120PS/172Nm guise, mated to a 7-speed DCT or iMT (automated clutch manual). The diesel on offer will be the 1.5-litre engine, likely producing 100PS/240Nm, and will be paired with a 6-speed manual only, representing an upgrade over the previous car's 1.4-litre diesel.