KTM India sweetly timed their announcement confirming that the 390 Adventure was set for 2019 launch. They timed it just as the bookings for the BMW Motorrad G 310 R and G 310 GS motorcycles opening in India. And BMW Motorrad India is now expected to reveal all, final India spec, any accessory packages, final prices (rumoured to be Rs 3.5 and Rs 4 lakh ex-showroom) as well as deliveries on July 18, 2018. The KTM 390 Adventure hits the same buzzing spot as the BMW G 310 GS and while it will come later - as we told you in 2016, a world exclusive - it is expected to be more cost-effective. And since the KTM India dealer network is much larger than the fledgling BMW network, it's almost guaranteed that the KTM 390 Adventure will outsell the BMWs. But that motorcycle is still to emerge. But the latest spy shot, courtesy UK motorcycle website Bennetts, shows a motorcycle that's calmed down quite a bit from the 790 Adventure prototype from 2017 Milan, widely tipped to set the tone for the new 390 Adventure. So, what can we see in the spy shots? 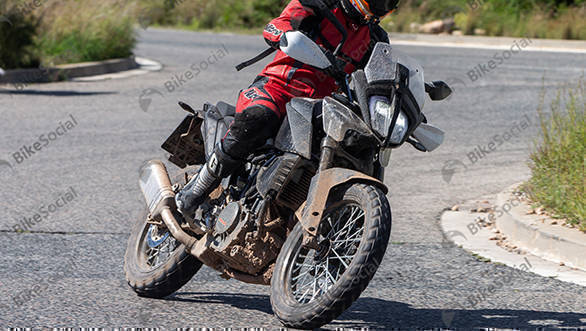 As you know, KTM did try to make an Adventure motorcycle based on the Duke platform earlier. A platform we were told was abandoned because the frame proved too tall in the middle. Essentially, when you raise the ride height for suspension travel, the motorcycle got stuck with an unreasonably high seat height. KTM's return to the drawing board was a circuitous process and the project was finally green-lighted as little as a year and a half ago at a meeting in Pune between Stefan Pierer, KTM boss and Rajiv Bajaj, Bajaj Auto and KTM India boss. The project is internally called... let's get on with it, shall we?

If you look closely you cannot see almost anything of the frame. The tank has forward extensions similar to the Duke but less rakish and at this angle, nothing is visible. But you can be assured that the KTM 390 Adventure uses a steel trellis just like the 390 Duke does. However, this frame will be different so that the height of the frame above the swingarm pivot is low to permit KTM to control seat height. This is crucial because the A2 licence class in Europe and new riders in India and South East Asia will all exhibit small inseams as a function of both age and genealogy. 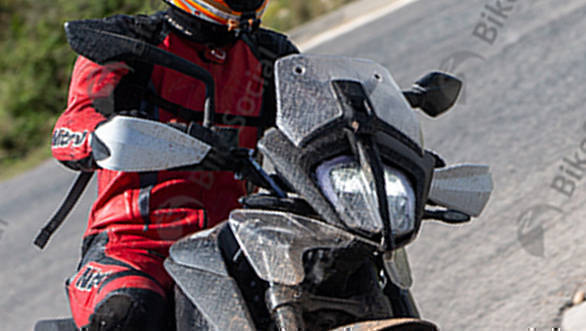 The all-LED headlight assembly on the 2019 KTM 390 Adventure looks similar to one offered on the 390 Duke. The hand guards, mirrors, brakes and switchgear too will be retained from the 390 Duke

KTM uses what seems the same unit as the KTM 390 Duke of the headlight. But it sits in a more substantial mini-fairing. This is not a surprise - this is how costs are controlled.

On top of the black plastic surround is a wide, almost featureless screen that Bennett's says might be manually adjustable. I think not. I think it will be fixed and you will get the option to get lower and taller screens as Powerparts.

The indicators, the mirrors and all of the switchgear (not visible) will all be shared with the KTM 390 Duke and that sets the stage for the colour TFT screen with Bluetooth functionality to also come to the 390 Adventure.

Notice the transparent air deflectors that sit below and flank the headlight. I know that KTM has used transparent plastics before, especially on the RC390 and these look a bit weird especially because the prototype is filthy. But I am very interested to see how they work out on the production bike. 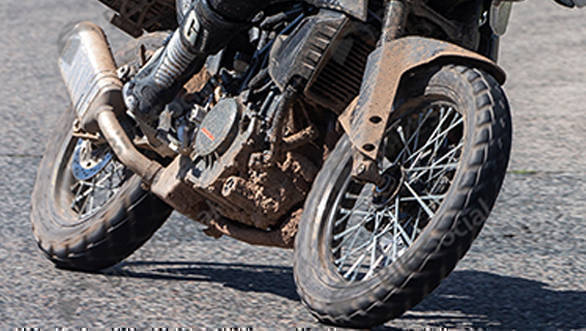 As seen in the image, the 2019 KTM 390 Adventure will have a semi-knobby tyre with a big-block open tread pattern that should bring road handling as well as ability to hook up and drive off-road

The front wheel has four things that grab my attention. First, is the size of the wheel. The wheel looks like a 19-incher. This confirms what KTM told us earlier - that the 390 Adventure was not a hardcore off-roader but a tour enduro. Which is a blend of touring ability (primary) and the off-road ability (secondary). A 21-19 front-rear would be too extreme for this purpose and that KTM 390 Adventure is going to be wearing what looks like a 110- or 120-section 19-inch front and a 150-section, 17-inch rear.
It's hard to tell but that looks like a Metzeler Tourance to me. That only comes in 100/90-19 and 110-80-19. I would think that's the latter. The Tourance also only comes in one size that fits this application, a 150/70-17. Just as a reminder, the Metzeler was the tyre that the Hero X-Pulse wore to the 2018 Auto Expo as well, though that was an Enduro 3, a more off-road tyre than the Tourance.

Second, is the tyre itself. The tyre is a semi-knobby tyre with a big-block open tread pattern that should bring road handling as well as ability to hook up and drive off-road. 19-17 inch also means that riders will have options when it comes to alternative tyres. If these are indeed the Tourance, then the bike's tyres are 80-20 in on- and off-road intent. Incidentally, that's exactly the tyre setup on the BMW G 310 GS also. Same brand, same sizes.

Third is the spoked rim and the pattern of the rim suggests that these will be tubed tyres, sort of like the Himalayan, or for that matter, the Africa Twin. This is not just a cost thing, many dirtbikes prefer tubed tyres because a fixed or replaced tube is safer than a tubeless tyres with numerous puncture patches when you're in the middle of nowhere.

Finally, notice the forks and the front fender design. KTM is using USD forks, no doubt from WP, but it wraps then in a comprehensive fender that protects the stanchions from dirt and grime that could cut fork seals. 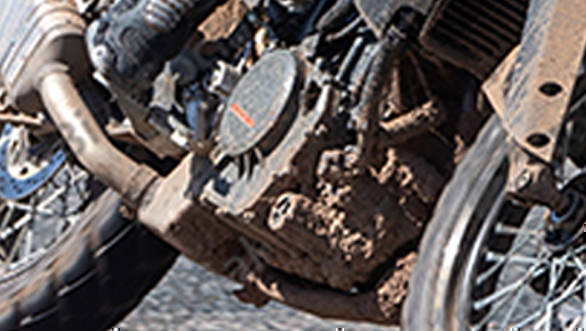 The 2019 KTM 390 Adventure will be powered by the same single-cylinder 373.2cc engine but with a different state of tune, most likely just the final drive. While the engine does not come with a bash plate on this test bike, we believe it will be offered on the production model

We are not expecting KTM to make dramatic changes to the engine. While it isn't complicated to re-tune the ECU and alter the power curves, I would imagine that a change of sprockets would be a simpler way to drive the power into the meat of the revs as you would want in the dirt. But since this is a tour-enduro and not a hardcore off-roader, minor alterations to the 390 Duke's gearing might be all that's needed.  The KTM 390 Duke is powered by a 373.2cc single-cylinder engine that makes 43.5PS. It was updated last year  with a Euro IV-spec motor with a side-slung exhaust and ride-by-wire tech. It also gets a bigger air box that allows them to extract an additional 2Nm in peak torque over the old 390 and 1Nm more than the 2017 RC390. 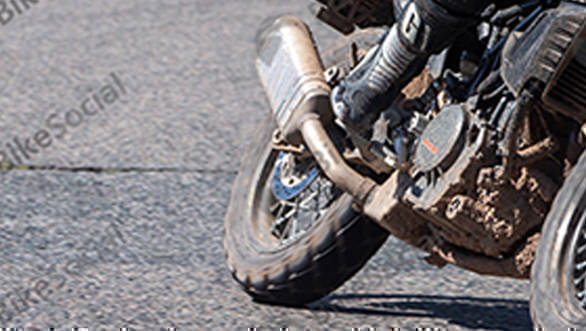 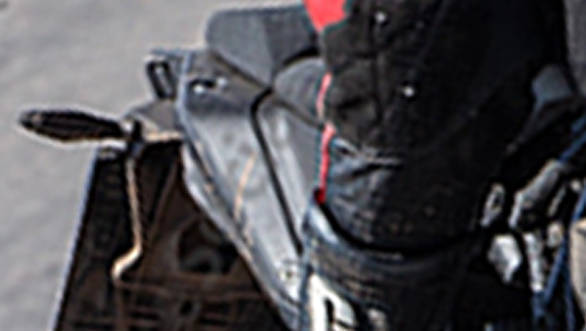 The 2019 KTM 390 Adventure rear body panels look more like a street bike or a tall tourer than an off-roader. Just look at the 790 Adventure R concept from the 2017 EICMA show

You can see that the front axle is offset forward but the tyre on it is bigger as well. This shouldn't change trail significantly but you can see that the rake is significantly more than the KTM 390 Duke. The external braced swingarm is visible, barely, but we expect that a slightly longer swingarm and raked out front will give this bike a longer wheelbase to go with its ground clearance and stability requirements. We expect to see that same brakes as the 390 Duke on duty, down to the ABS with Supermoto mode. 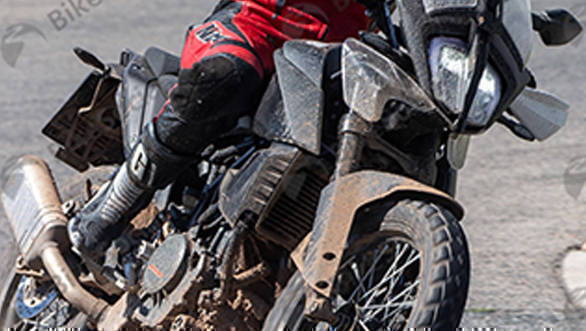 I don't believe the KTM 390 Adventure will have more than a 15 litre tank and what little of the seat that is visible suggests similar, flat-topped seats to the Duke.

Okay that isn't a great looking or arresting looking motorcycle to be sure. And that's no surprise. First of all, KTM does a lot of styling work with colours and graphics and this prototype is filthy, its been around a bit and all-black. But if you were dreaming of a hardcore off-roader like the KTM 790 Adventure R Concept, this bike is a much milder motorcycle to be sure.

However, the engineering seems to be exactly what KTM means by tour-enduro. A tallish motorcycle with big suspension, a plush ride, great highway manners and some off-road ability. All that at a KTM India-style pricing, cheap spares and go anywhere ability? Well yes, that is why there is so much buzz no? 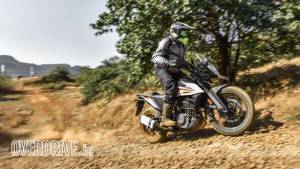 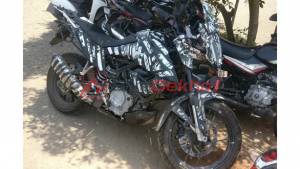 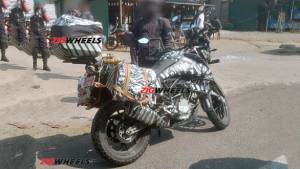