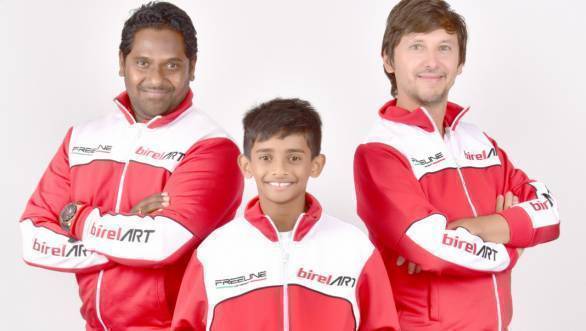 Birel ART is the first karting manufacturer to come to India with a factory team, and this has boded well for especially one young Indian karter. Ruhaan Alva has signed an agreement with the team, that covers his participation in the JK Tyre Rotax Max National Championship in over the course of the 2016 and 2017 seasons. It also extends to a few races in Europe in 2017.

"I am very happy for the opportunity," said Ruhaan Alva. "Birel ART has arrived this year in India, and they are the best and coolest team. I am also very excited because ART Grand Prix has teams in FR 2.0, GP3 and GP2 and can guide me in my career in Europe."

Birel ART India's team principal Marco Bartoli added "We already knew about Ruhaan's racing accomplishments in the past two years, but team director Preetham Muniyappa and I, had the opportunity to watch him in action in the first three races of the championship. He is a great talent and has impressed us with his speed, consistency and maturity. Off the track, he is a pretty quiet kid, but it's pretty clear that Ruhaan likes to do his talking on the track! Preetham and I are delighted to have him join the Birel ART India team, and see great potential for his future racing career."