Advait Deodhar won his very first event in the NASCAR Whelen Euro Series on his debut in the championship at Valencia. The Mumbai-born racer, who is competing in the event's Elite Club Division, managed to take victory in what is his very first time racing in Europe. 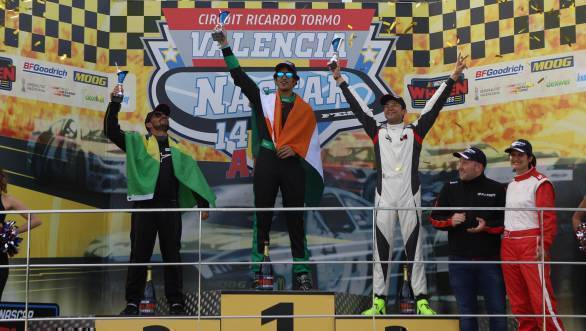 28-year old Deodhar, who competed for Mishumotors in the No.33 Chevrolet Camaro, won the event that was run in a time trial format. He finished first in the opening session, and was second in the second session. This meant that he had won the event once the results were combined. Finishing second to Advait was Marcelo Silva, while Clemens Sparowitz took third place.

A spotter helped guide Advait through the various sessions, where he had to match a target time set by the NASCAR organisers. This wasn't an easy task, given that he had to pace his Camaro in different sectors based on the target time that had been set.

After his victory, Advait said, "Well, this was quite different to what I have driven in my career so far, both in terms of the car and the championship. It was a great experience though and to win it straight out of the box against some regulars on my debut in Europe was hugely pleasing."

While Advait entered the Valencia round of the Euro NASCAR Championship in order to test the waters, he now plans on moving to the Elite 2 category of the championship from the next round. "I've worked pretty hard to get funding to drive as my Euro NASCAR scholarship is only usable if I drive the full season," he said. "I am very glad with deciding to drive and I am looking forward to move into the ELITE 2 category from the next round, hopefully. I still need the budget and hope this wins helps me find it!" he continued.