Italian bike maker MV Agusta has reached the yearly benchmark of 9000 bikes thanks to strong export numbers and growth in Europe. The strongest export increase of 140 per cent was recorded in the United Kingdom while the domestic sales in Italy remained unaltered from the previous year's figures.

Spain and Germany have recorded increase of 54 per cent and 26 per cent respectively. The rise in sales in Switzerland is reported to be a humble 14 per cent. The sales of MV Agusta bikes have also shown a steady growth in the Far East with new unit sales increasing up to 12 per cent. 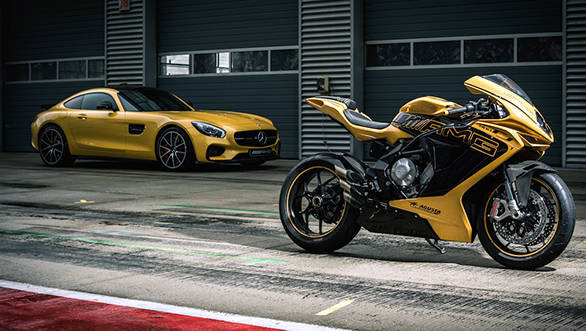 Models such as Turismo Veloce and Dragster RR, touted as best sellers for MV Agusta, contributed in the raise of the company's total revenue with an increase of 30 per cent. The company has high hopes on the upcoming All-New Brutale 800 which will be launched in January 2016, fifteen years since the original edition was launched. The Brutale 800 has already sold in excess of 30,000 units.

At the German auto show, the F3 concept bike "inspired by AMG" was revealed next to its "twin" AMG supercar, similar programs were also held at their respective manufacturing facilities both in Schiranna and Affalterbach as a sign of cooperation between the two companies.

Even though the motorcycles will be sold through their 450 MV Agusta worldwide dealerships, as part of the long term strategic planning by the sales and marketing networks of both companies, MV Agusta motorcycles can be seen in various AMG showrooms across Paris, Tokyo, Stuttgart and Tapie as a symbol of their collaboration.

MV AGUSTA GROWS 30 % IN SALES IN 2015 CONSOLIDATED COOPERATION IN SALES AND MARKETING ACTIVITIES WITH MERCEDES - AMG.