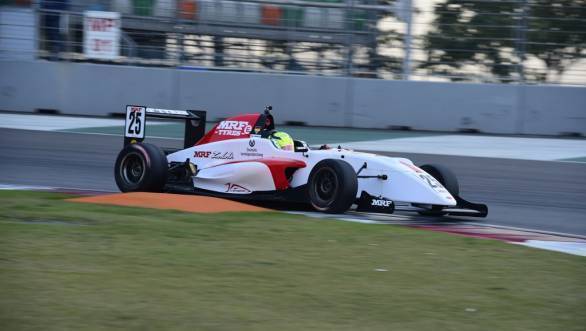 Mick Schumacher is currently third in the championship standings, with 100 points up for grabs at the MRF Challenge season finale

The championship finale for the 2016 MRF Challenge will be held this weekend at the Madras Motor Racing Track. The F2000 cars are all set to take to the track in Chennai for what is the most critical race of the season. This, because the finale sees a three-way title fight between championship leader Joey Mawson, and Harrison Newey who has a 27 point deficit to Mawson, while Mick Schumacher, who is 40 points behind, currently stands third.

However, the championship could go any which way, since there are 100 points up for grabs over the course of the race weekend.

The season finale of the MRF Challenge will also feature the second round of the National Racing Championship, with the MRF 1600 cars, Formula LGB 1300s and the saloon cars also taking to the track.

Arun Mammen, Managing Director, MRF Tyres, said, "The final round in Chennai always brings a lot of excitement and this time will be no different. The Championship has been closely contested featuring some of the best young drivers from across the world. The cars have been 3-4 seconds faster this year and we expect the MMRT to witness even faster times. We eagerly await to see who will be crowned the MRF Challenge 2016 Champion and look forward to a thrilling weekend ahead."

Joining the MRF Challenge for this weekend will be Red Bull Junior and F3 driver Dan
Ticktum. He will joined by 2015 Italian F4 Champion and F3 race winner Ralf Aron, along with Japanese F3 Champion (National Class) Yoshiaki Katayama and Manuel Maldonado.