2017 MRF Challenge: Felipe Drugovich leads the championship after Round 1 in Bahrain

Brazilian driver Felipe Drugovich began his 2017 MRF Challenge campaign very well indeed, having taken victory in both first and second race of the season at the Bahrain International Circuit in Sakhir. The driver benefited from race leader Rinus van Kalmthout's retirement in the first race, to claim victory ahead of Presley Martono and Dylan young. van Kalmthout had also qualified on pole for the race, while Drugovich had only qualified second on the grid. 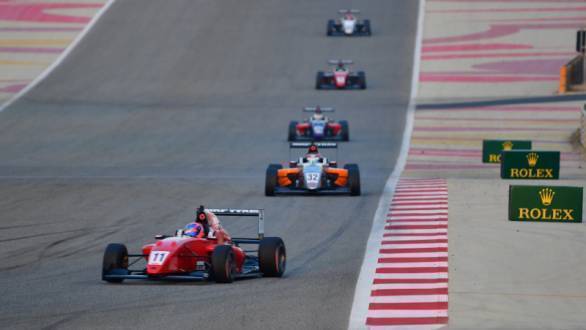 In the reverse grid Race 2, it was Manuel Maldonado who leapfrogged French GP3 driver, Julien Falchero, and took the lead. Drugovich, meanwhile, had a strong start from sixth on the grid, moving into third behind Alex Karkosik. While Karkosik and Drugovich managed to put pressure on Maldonado, it wasn't possible to get past him. Martono managed to pass Falchero on the sixth lap of the race, while second-placed Karkosik retired with a mechanical problem. On the last lap, Drugovich outbraked Maldonado to take the lead, with Martono close behind. At the last corner, it was Martono who managed to get his nose ahead, eventually crossing the chequered flag by 0.010 seconds. Maldonado finished third, which was no consolation, given that he lost the lead on the very last lap.

Said Drugovich of his double win, "I am really happy to win both races today. In qualifying we were still trying things with the setup. We were lucky to win Race 1 with Van Kalmthout retiring. In race 2 I had a great start and managed to get behind Maldonado. He made a small mistake into the final corner and I took advantage
to pass him into the first corner. It has been a great start and I hope we can do the same tomorrow." 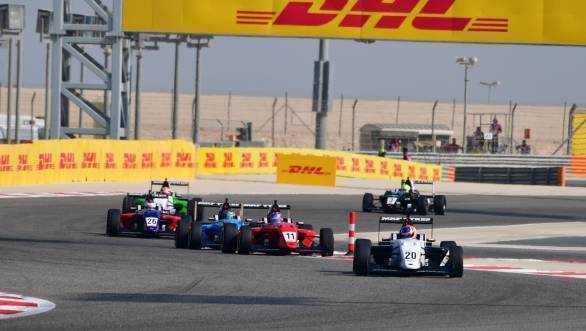 Race 3, saw van Kalmthout claim his first win of the 2017 MRF Challenge. When the race began, it was van Kalmthout who made the perfect start, leading into the first corner, with Drugovich holding off Falchero for second. The race leader managed to open the gap up to the following pack by as much as eight seconds when the chequered flag fell, while Falchero took third behind Drugovich.

In the final race, it was van Kalmthout who once again managed a perfect start to the race, claiming the lead. Falchero took second, with Drugovich in third. There was swapping of places, before a Safety Car situation was caused by an incident elsewhere on track. But when the race was restarted, it was Falchero who took the lead, moving past van Kalmthout. Martono managed to move into third, ahead of Drugovich. Meanwhile, another Safety Car situation was caused. At the restart van Kalmthout attempted to regain the race lead, but wasn't able to, instead losing a spot to Martono. But eventually, as Falchero took the race win, van Kalmthout managed to move back to second place, with Martono having to remain content with third. 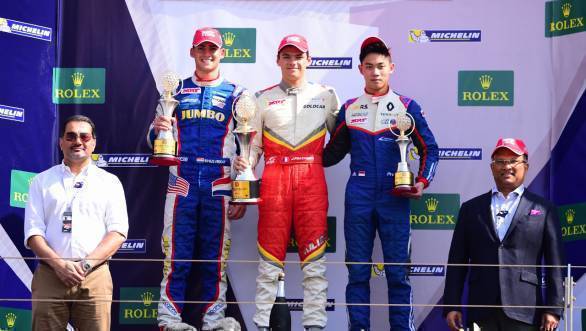 Speaking of his win, Falchero said, "We were struggling yesterday with the car but the entire team helped to give me a great car today. We had the pace to win both races today and I took advantage of the Safety Car to jump van Kalmthout to win. So very happy with the result and look forward to the next Round in Dubai"

Meanwhile, Race 3 winner van Kalmthout said, "After yesterday's disappointment today was a very good day. In the first race I had the lead and I managed to go faster and faster to win comfortably. It was unfortunate that the Safety Car came out so early but
am very happy with 2nd place."

After Round 1, Felipe Drugovich leads the championship with 80 points, with Julien Falchero in second place with 65 points, and Presley Martono has 63 points. Rinus van Kalmthout has 61 points, putting him down in fourth place.

The next round of the 2017 MRF Challenge will take place in Dubai between the 7th and 9th of December.