Motorsport and the matter of time

Follow through. Two rather simple words when you consider them individually, but awfully demanding when you put them together. The words, once hand in hand in that order, involve no longer just basking in the glory of an idea, which is the easy part, but actually getting a move on and doing something about it. It goes far beyond just the initial stage of bringing the idea to fruition. It involves a good deal of patience to make sure that the result of this idea manages to become something more  that it grows, survives, and someday is even able to sustain itself. Getting an idea to this stage involves a hard work aplenty. A fair measure of Zen-like philosophy. And the willingness to give things time. Very often though, it's time that people don't seem to have.

What's got me thinking of time? Well, it's the ticking of the motorsport clock that's done it. And it's hard not to sit up and take notice. Over the last few years, the interest in motorsport in the country has increased. I'm not talking about the odd Indian driver taking part in a racing series abroad, which, no doubt has helped focus some attention on racing in the country. And I'm not speaking of the three-year dalliance that Formula 1 had with the Buddh International Circuit. Instead, I'm talking about the lower rungs of racing in India. Those very important and critical series that are tasked with setting up a system that allows young drivers to hone their skills, to gain a foundation in racing, and then, if they're good enough, to progress onto the next level.

There have been a whole host of one-make series that have cropped up in the country over the last few years. Some have survived. Others have done well in the first couple of years, gone a scale smaller in the years after, ended up as blink-and-you'll-miss-it events in subsequent years, and then entirely faded away. They've, quite simply, died. We've been told by spokespeople that they weren't impressed with what they saw, that they didn't think there was any value continuing to invest in motorsport because they saw no return on their investment, and that it was overall too much of a bother. As we head into the 2016 season of racing, we've lost at least one single-make tin-top racing series and one single-make motorcycle racing series. It's sad.

At the same time believing that things would progress at an exponential rate also was myopic. But giving up, shutting shop and folding for good  that's probably the most short-sighted move of all. There were small victories that needed to be celebrated first  the fact that the grids were always full because people wanted to come racing. The fact that the competition in those races wasn't bad. And the fact that there were people willing to come back the next year and give it another go. Yes, everything on track during a motorsport event needs to be fast. However, to expect everything off track to progress with the same celerity is unrealistic. It's like planting a seed and expecting a tree the next day. It just won't work.
The series that have survived in the country are events that have been carefully evaluated, tweaked, revamped over the years since their inception. These are series that appear to provide drivers with value for money at every level. Series that have equipment that is on par with what you might find abroad. Series that might not come cheap, but offer a certain measure of quality, so that if a racer does graduate from it to racing abroad, he isn't floundering and left unable to handle the machinery that he's been given.

These series often offer a driver a real chance to win big  to win prize money or a racing seat in a higher class. In a sense they also offer drivers the chance to chart out a future for themselves in motorsport, if they really are good. It's not just big series with big names behind it, like the MRF National Racing Championship or the Volkswagen Vento Cup, that I'm talking about that appear to have got it right. Events like the Rainforest Challenge have got it spot-on too, and that started with just Ashish Gupta's idea to bring the event down to India. It worked because it was followed through with more than just passion. And it's also the word passion that I've been thinking of so much. 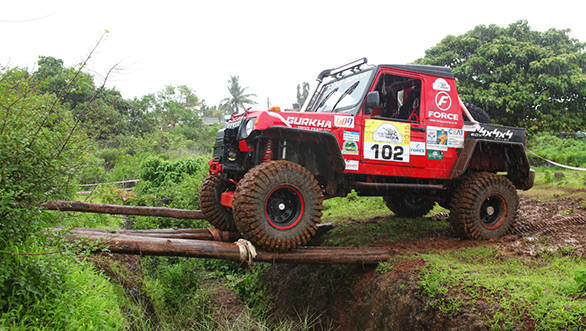 Passion is very important. It gives us the drive that we need to make something happen. But it really and truly isn't enough. You can't measure passion on a graph that you show prospective sponsors and promoters of events. You certainly can't measure it in the same way that you can measure out ticket sales to an event and the number of viewers it had on the tele. Which is why, even though it's important to have plenty of passion, it's also important to back that up with a concrete business model that offers people a return on their investment.

See, passion took CS Santosh to the Dakar Rally in 2015. I'm certainly glad that it did. His performance at the 2015 Dakar Rally made investors take notice. And then the fact that he appeared to be able to market this, to get his face into as many magazines and all those many forms of social media, also made a difference when it came to why someone would invest in him again. I'm fairly certain the presentation that Santosh made to companies didn't just offer prospective sponsors a giddy rush in exchange for their investment in him. It's not an ideal way to look at the sport that we all love. But it's possibly an honest way to look at it. Yes, we need that idea to begin with. But we also need to be able to persist in order to make motorsport run in this country. And we also need a tremendous amount of follow through, realistic goals, realistic returns, and a little bit of time to achieve those goals and see those returns. Passion? Well, it's that little bit of a spark that sets things in motion.