When I fell in love with motorcycles, it quickly became clear that my father wasn't rich enough. Since I wouldn't be able to afford both, I'd have to choose between kids and motorcycles. Kids have a propensity for requiring pediatricians, food, education and eventually marriages. They also have fearsome reputations as shatteringly good negotiators. Choosing bikes was easy, to be honest.

More recently, I've been chatting with a number of fathers of recent vintage who've all begun planning to offer motorcycles to their newly minted toddlers. I really admire the fact that all of them are clear that the bikes will be offered as a choice. They're mentally ready for a situation where the child rejects them as un-fun and uninteresting. Not one of them is saying, "If I can get my little wonder on a bike at four, I can turn him into Rossi, or better yet, Marquez. Though given how much s/he cries, I'm more likely to end up with Lorenzo, may be even a Biaggi."

But whether they like it or not, motorcycles and kids, to me sounds like a terrifically good idea that parents outside the small group of motorcycle fans should really give a good, long thought to. For many reasons. But before I get to the reasons why parents should, let me get why most don't out of the way.

The essential fear when it comes to motorcycles is about getting hurt or killed. There, I said it. Falling off bikes hurts and that becomes hard to reconcile with the relentless (and not inappropriate) societal and biological pressure on parents to protect their kids from harm and danger. I guess that's why MotherCare stores are full of plastic doo-dads (which, to my eternal dismay, does not mean a prosthetic father on nappy changing duty) that're supposed to be stuck on all manner of edges and corners at home to cushion the blows that the average kid will receive as s/he grows up in a furnished house.

If you were paranoid enough, you'll also extrapolate that the potential love of motorcycles will survive well into adulthood. Which not only means money spent on bikes but also implies a life of worrying about their well-being as they buzz about the world on those horrible two-wheeled contraptions. Motorcycle fans, after all, tend to want to ride their bikes even out in the real world, right?

But if I were a parent, I'd definitely offer my children the option of riding bikes from as early an age as possible. I believe that motorcycles require great mental processing skills as well as physical strength and skill. There are games, activities and a whole store full of apps to develop exactly that, but motorcycles take you outside in the real world and that's better than a touchscreen or a piece of cardboard. 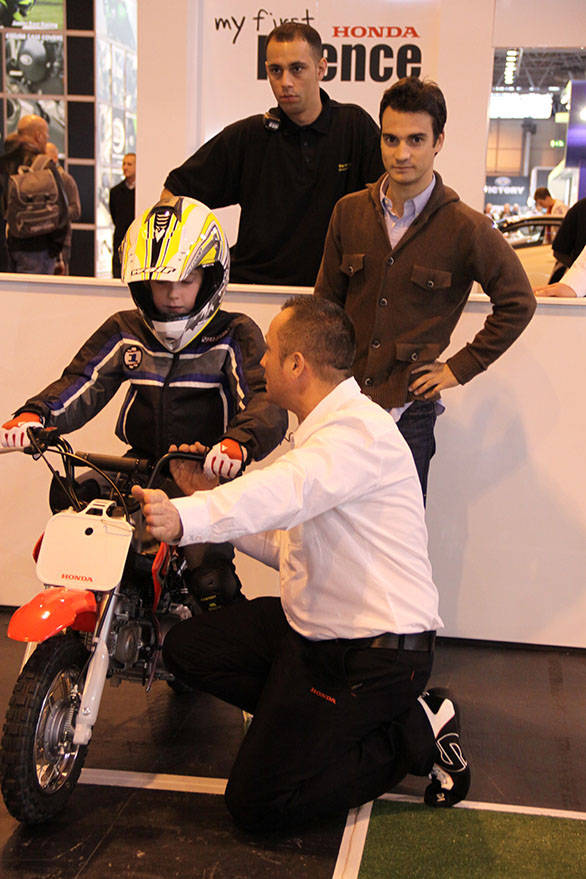 Bikes are also heaps of fun. Just see the faces of the little kids on their cute little dirt bikes towards the end of the Why We Ride documentary. They're having a great time along with their parents. I think kids who love bikes will probably be positive, outgoing people and we could always do with more of those kind of people in our world, right?

Bikes are also emotionally powerful devices. I suspect that if my kids and I rode bikes together often enough, the bond between us would be stronger and closer. I understand that society and child specialists think this stronger bond is a good thing and it makes dealing with the little demons during the teen years a lot easier. Think about it, angsty teens riding bikes are extremely unlikely to remain angsty.

Would I worry about them falling off? Of course! The first aid kit at home would probably rival a hospital's emergency room. There'd be protective gear in every nook and cranny to ensure that little Max and Bozo are as protected from injury as humanly possible. But never will they be discouraged from trying something. I wasn't. And I did hurt myself. I learnt from that and figured out how to accomplish my intentions without hurting myself the next time around. I also learnt what Dettol and Neosporin do. And that doing 'phoo' while rubbing Dettol appears to hurt less. Lessons etched deep into my head through firsthand experiences.

Of course, there's every chance that the kids'll think stamp collecting or crochet is more interesting than motorcycles. As motorcycle-mad parent, that will be hard to swallow unless you're a relentless optimistic like myself. Both, think about it, are cheaper in the long run than motorcycling. But I'm sure the kids will understand your passion more as they grow up because they tried it. And maybe they will even understand why they've to go to the Indian college because you're buying the next YZF-R1 instead of sending them to that mythical college across the seven seas.

But Newton's law says the apple doesn't fall far from the tree. Chances are if you're surrounded by motorcycles and motorcyclists as you grow up, then you'll be a motorcyclist as well. Kids who start young will be more in control of their bikes and are statistically more likely to be virtuosos at it.

Which will probably make them safer in traffic as riders and drivers once they get their driving licences and wade into real world traffic. Giving my kids a head start in skill and safety in the battle against the world's most voracious killer - traffic? I love motorcycles and my kids better love them too.