The Dutch TT at Assen turned out to be a terrific event for Marc Marquez. Not only did the Repsol Honda rider manage to pull a stunning victory out of the bag, he also managed to equal Casey Stoner's record of 69 MotoGP podiums. And, the win gave him a decent cushion at the head of the championship standings, moving him to 41 points clear of his nearest championship rival. 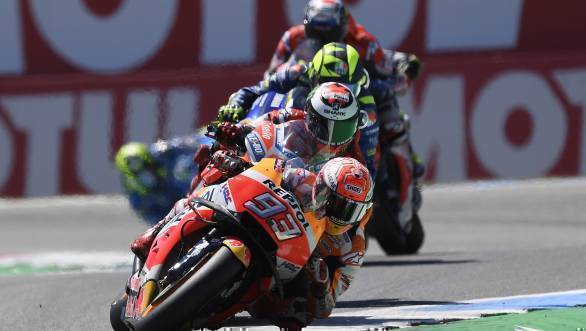 Finishing second in the race was Ecstar Suzuki rider Alex Rins. Rins managed to get the better of Yamaha's Maverick Vinales on the last lap of the race, taking home a podium. Vinales settled for third place, his first trip to the podium this season. Ducati rider Andrea Dovizioso took fourth place, while Valentino Rossi finished fifth.

Early on in the race, however, it was Ducati's Jorge Lorenzo who took the lead. Lorenzo, in fine form after back-to-back victories at Mugello and Catalunya managed to move to the head of the order, where he stayed for a while. Rossi, who was in third, wasn't willing to settle for that spot. He managed to move up into second, and ended up tagging Lorenzo at one point. However, this only slowed the then race leader down a little though, and Lorenzo continued his charge at the head of the order. 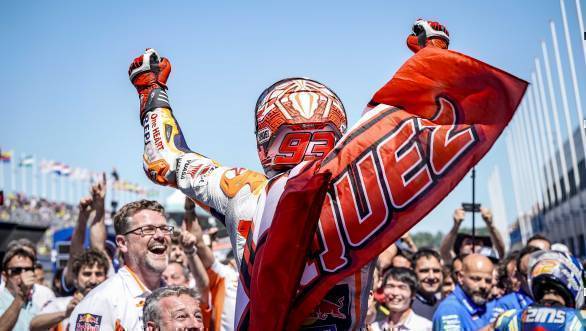 Behind him, the battle for second raged on, with Marquez, Dovi, Rins, Rossi and Vinales constantly trading places. Dovi was, by then, the nearest threat to Lorenzo, and managed to get ahead of him for the lead of the race. Lorenzo then began fading, and somehow it transpired that Maverick Vinales managed to move into the lead. But calling a winner at that point was dangerous, what with all the trading of places. And, let's not forget, there was still a very determined Marquez in the fray. And it was Marquez who moved into the lead and managed to stay ahead of both Vinales and Dovi for a while.

Marquez and Vinales then made contact, which meant that both Dovi and Rossi managed to get past them. While Rossi managed to lead, it wasn't for very long, with Dovi managing to use the Ducati's speed to his advantage, taking the lead on the main straight. 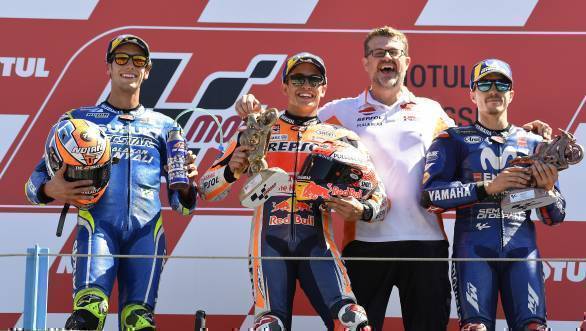 The podium at the 2018 Dutch TT - Alex Rins, Marc Marquez and Maverick Vinales

But Marquez was determined. He got past Rossi, picked his way past the leading Ducati, and then held on to top spot till the chequered flag fell. Rossi, behind, did make a lunge for second place, but it wasn't to be. He ran wide eventually, finally ending the race fifth. While Vinales and Rins managed to move past Dovi, they didn't finish in that order, with Rins ending the race second after a move on the last lap. Vinales rounded off the podium.

The Dutch TT has been hailed as one of the races that will go down in history, not just as a good one, but a great one. After all, it had over 100 overtaking manoeuvres, which certainly is something!