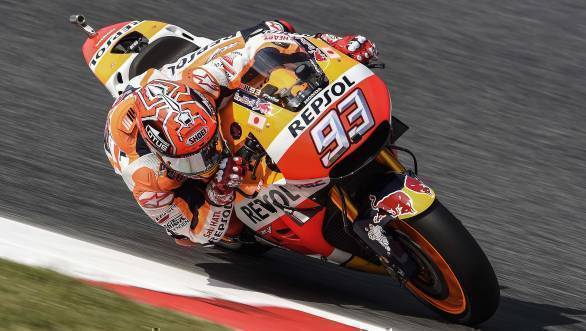 Marc Marquez will start his home race, the Catalunya GP in 2016, on pole

Marc Marquez took pole at the 2016 Catalunya GP, his first at the track since he moved up to MotoGP, by 0.476sec.

Second place on the grid went to championship leader Jorge Lorenzo, while Marquez's team-mate Dani Pedrosa completed the front row at a track that seems to suit the Repsol Hondas very well.

Hector Barbera lines up at the head of Row 2, with Valentino Rossi only able to manage fifth and Suzuki's Maverick Vinales not able to do better than sixth, despite showing plenty of promise during practice.

Following Luis Salom's crash on Friday, the riders are now competing on a revised layout of the F1 circuit at Catalunya.