MotoGP dream partnership of Rossi and Burgess to split in 2014 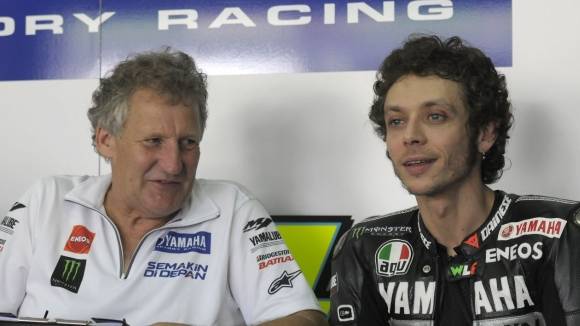 Valentino Rossi announced that he would be splitting with long time crew chief and friend Jerry Burgess for 2014. The announcement was made at the pre-race weekend press conference in Valencia, Spain. This brings an end to a relationship that has existed since Valentino Rossi entered the premier class in 2000. Jerry Burgess who has worked with Mick Doohan and  Freddie  Spencer has been key in setting up all of Rossi's rides in the top level of racing and a key player in his seven premier class world titles.

After moving to Ducati in 2011 Rossi's has struggled against riders like Casey Stoner, Dani Pedros, Horge Lorenzo and the new kid on the block; Marc Marquez. After moving back to Yamaha for the 2013 season things have not changed (as per Rossi's standards) and he has finished fourth seven times with just one win. Rossi said the reason behind this decision is that he feels that he has tried a number of things that have not worked and that next year he wants to try something new and find new motivation. He also went on to say that it was a very difficult decision for him to make and that he saw Burgess as not just his crew chief but part of his family and his 'father of racing'.

Rossi hasn't revealed details of a new crew chief adding that "I have some ideas but sincerely we don't decide yet."