The 2019 MotoGP Gran Premio D'Italia Oakley will go down in history as one of the most epic of all times, with home favourite, Danilo Petrucci securing his first-ever MotoGP victory. The Mission Winnow Ducati rider made a crazy lunge for the lead on the final lap of the Race, overtaking Repsol Honda's Marc Marquez and teammate, Andrea Dovizioso. The victory, however, was hard fought as the top five riders battled for the lead on every lap. 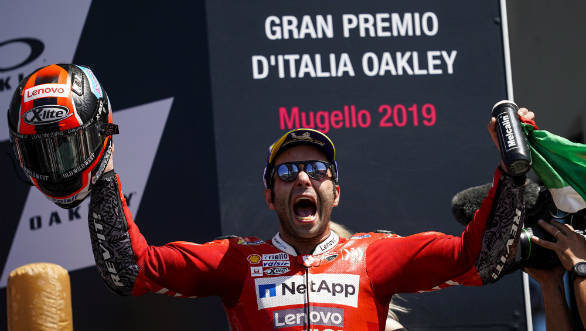 As the lights went out, Marquez managed to shoot off the line and stay ahead of the much more powerful Factory Ducati of Andrea Dovizioso who leaped from ninth to third, going into Turn One. Danilo too made a good start, checking in behind Dovizioso through the next set of corners.

As the Race progressed, Marquez, began opening a slim lead over the Ducatis but as has been the case, it was only a matter of time before the top speed advantage of the Italian bikes played to their advantage. With Fourteen Laps to go, Danilo pounced on Marquez, to move into the lead. Jack Miller (Pramac Ducati), Dovizioso and the hard charging Alex Rins (Team Suzuki ECSTAR) quickly rode past Marquez, pushing him down to fifth. The Spaniard, however, bounced back and began passing the leaders, outbreaking the Ducatis into corners. Jack Miller looked strong at one point but an error caused him to crash, reducing the leading pack to four riders. 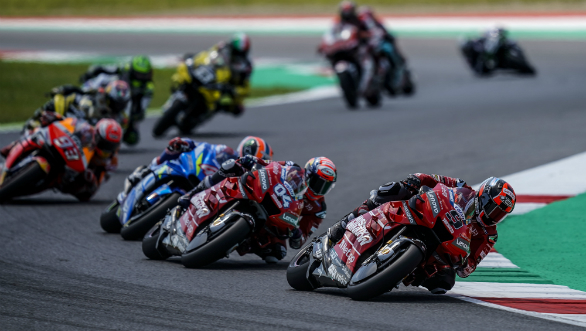 Alex Rins put up a valiant effort to stay with Marquez and the Factory Ducatis but in the final stages, it was a three way battle between Marquez, Dovizioso and Petrucci. Going into Turn One on the Final Lap, Marquez and Dovizioso braked as late as possible but ran wide, opening the door for Petrucci to dive on their inside and snatch the lead. At one Dovizioso had to sit up the bike to avoid contact with Marquez and Petrucci, sandwiched between the two. From then on, there was no stopping Petrucci, who crossed the finish line, 0.043s ahead of Marquez, who was hoping to slipstream past the Ducati.

Petrucci could not contain his tears on the victory as he and the Factory Ducati celebrated a monumental victory.

While it was celebration time at Ducati and Honda, the riders on the Yamaha YZR-M1 had a Race to forget. Yamaha's woes continue as all riders struggled with drive out of corners as well top speed. In some cases, the difference in top speed between the leading motorcycles was as much as 15kmph. That's a huge disadvantage at Mugello, given the ultra long start finish straight that allowed Dovizioso to set a new MotoGP top speed record at 356.7kmph. 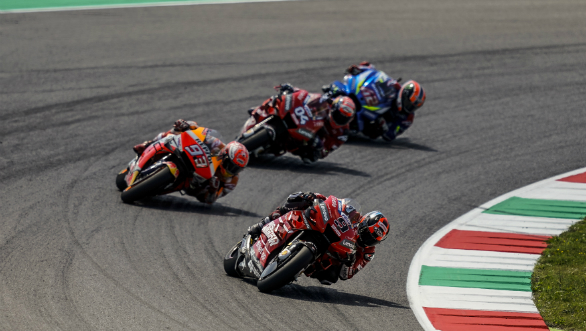 Monster Yamaha's Valentino Rossi also had a miserable weekend, qualifying at P18 and crashing out of the Race, in pursuit of the leaders. His teammate, Maverick Vinales crossed the line at P6, over seven seconds behind the winner.