Victory at the MotoGP round at Jerez, Spain, went to Marc Marquez. The Repsol Honda rider beat out Tech 3 Yamaha's Johann Zarco, and Ecstar Suzuki's Andrea Iannone to get to the top step of the podium. The win allowed him to take the lead of the riders' championship, in a race that saw the likes of Cal Crutchlow, Andrea Dovizioso, Jorge Lorenzo and Dani Pedrosa all crash out. Marc Marquez celebrates victory at Jerez, the fourth round of the 2018 MotoGP championship

While it was LCR Honda's Cal Crutchlow who was on pole for the 2018 Spanish GP, Marc Marquez muscled to the front of the pack on the ninth lap, taking the lead from Jorge Lorenzo, who had led the race in the early stages. 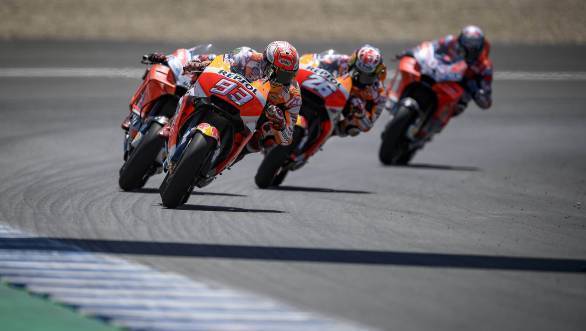 Behind him, Ducati's Andrea Dovizioso moved into third place, getting the better of  Marquez's team-mate Dani Pedrosa. When Dovizioso attempted to get past Lorenzo, on the 18th lap of the race, he outbraked himself and ran wide. Pedrosa decided to try and get past both the Ducatis on the inside of the corner, but Lorenzo, who had been forced off the line, then moved back on, making contact with the Repsol Honda. The result was all three riders crashing hard. This left the field clear for Marquez, who seemed set for a sure victory, with Zarco now up in second place. Behind Zarco, a battle raged between Iannone, Danilo Petrucci, Jack Miller and Valentino Rossi, all vying for the final spot on the podium. Eventually, Iannone would make it to third place, with Petrucci taking fourth, Rossi moving up into fifth place, while Jack Miller had to settle for sixth place.