The MotoGP round at the Bugatti Circuit at Le Mans proved to be disastrous for Marc Marquez's title rivals, with both Ducati rider Andrea Dovizioso, and Tech 3 Yamaha's Johann Zarco (who was on pole at his home race that too) crashing out. A storming ride from Marquez ensured that the Repsol Honda rider would take victory, and extend his championship lead to 36 points over nearest rival Maverick Vinales. 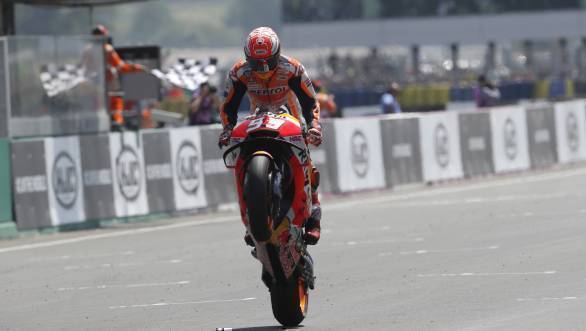 Third win in a row for Marc Marquez, this time at Le Mans

At the start of the race, though, it was Jorge Lorenzo who managed to get into the lead, with Marquez ending up in fifth place. Pole man, and home hero, Zarco managed to move back up into second place. Ducati's Dovi was no slouch, making his way into the lead, having carved past his team-mate Lorenzo, and Zarco, by the fifth lap. However, he ended up crashing out after merely three corners!

Meanwhile, Marc Marquez was the man on the move. Having managed to muscle his way past Petrucci, he then began scrapping with Zarco, who eventually would have a fall at Turn 8. This meant that all Marquez had to do was pick off Jorge Lorenzo ahead of him, and take victory. 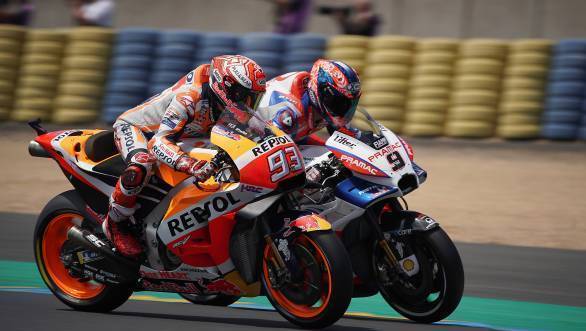 It wasn't to be Lorenzo's day, with the Ducati rider slowly dropping back, while Marquez ran away at the head of the order. He went on to take his third straight win in the 2018 season, with Petrucci taking the second step on the podium, and Valentino Rossi finishing third after fending off a hard-charging Jack Miller. 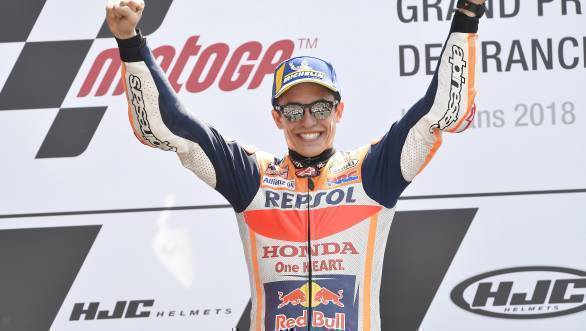 Pleased as punch, no doubt, now that he's increased his 2018 championship lead to 36 points over his nearest rival

Miller had to remain content with fourth, while Dani Pedrosa took his Repsol Honda to fifth place. Maverick Vinales, now second in the championship standings with 59 points, behind Marquez who has 95 points, finished seventh, behind Lorenzo. Cal Crutchlow managed a heroic ride to eighth place (recovering from an injury during qualifying that saw him end up in the hospital), while  Aleix Espargaro took ninth for Aprilia. Suzuki's Alex Rins rounded off the top 10.